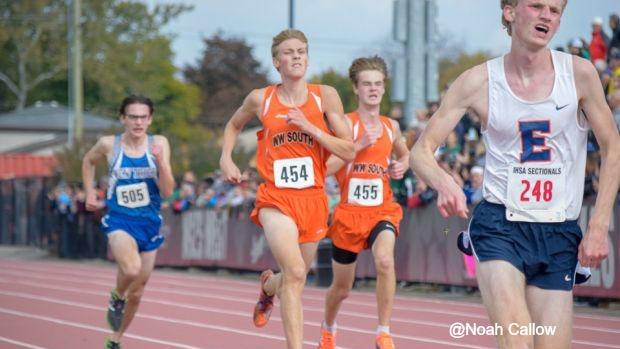 The scene of what has become one of the state's top attraction for state qualifying cross country meets, the Niles West Sectional once again provided intrigue and drama. As expected most of the favorite teams and individuals advanced to Peoria for the state championship next weekend.

The consensus choice for the team title was #6 Wheaton-Warrenville South but #13 New Trier had other plans. Led by junior Bridget Forbes' 7th place finish, the Trevians maintained their game plan of strong pack running that eventually turned into racing. Behind Forbes was a formable group of teammates that amassed a 37-second scoring split. The Tigers on the, on the other hand, were not happy campers fighting uphill the entire race. Sophomore Sam Poglitsch led the way with a runner finish but it was a 1:02 scoring split at 2-5 that cost them the victory. #16 York, #21 Glenbard West, and #8 Oak Park-River Forest advanced on to the big dance.

It was superstar junior Katelynne Hart of Glenbard West who controlled the race. The thought of sub 16:00 talk was quelled very quickly after just a 5:30 opening mile. Hart did not feel resistance from the competition or weather conditions as she routed the field with a time of 16:39. After Politsch's 17:22 to hold back senior Katie Hohe of Glenbard West, senior Ella Behrens of Whitney Young came through with a great performance to take fourth in 17:33. York senior Sarah May grabbed fifth in 17:47.

Boys-
#1 Wheaton-Warrenville South took home top honors ahead of #5 Glenbard West and #4 York. These top dogs have tangled for two weekends in a row and they will do so again next weekend on the famed Detweiller course. It what appeared like a dress rehearsal for the state meet could have resulted in a loss for the Tigers had they not turned up the intensity in the final mile. Junior William Hauenstein kept pace with the lead group throughout the race and ultimately placed third overall in 14:49. The 37-second scoring split was met with mixed results as several key runners were exchanged. Glenbard West perhaps ran their best race of the season taking second on the strength of senior Stephen Moody's fourth-place finish in 14:51. The Hilltoppers got a solid performance from senior Rory Cavan who was sixth in 15:01.
Two other athletes who assisted their teams in state qualifying but helped themselves as well were junior Ethan Kern of York and senior Tommy Brady of Maine South. Kern ran a methodical race staying off of the leaders for the first two miles before closing out Brady for the win on the final home stretch in 14:37. Brady was also clocked in 14:37. After Hauenstein and Moody, it was Whitney Young senior Sam Rivera taking fifth in 14:53.
==================================================================================
LOOK FOR THE FULL BLOWOUT RECAP ON SUNDAY!
Tweets by MilesplitIL