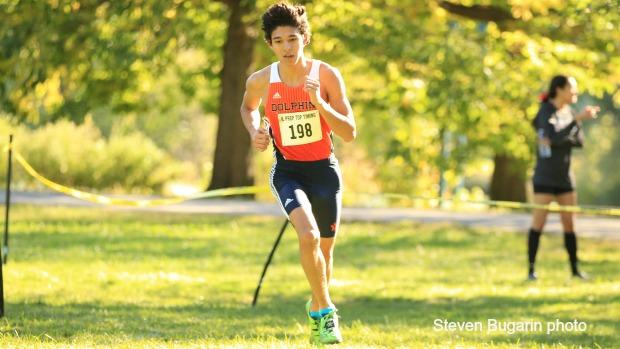 It was a quick play of survive and advance for the participants of the Chicago Jones Regional. With only two races that ran within 30 minutes of one another, it was like a grab and go sequence at the local convenience store.

The same course that the Chicago Public League used for its championship was re-routed prior to the start of the meet to avoid some mud and damp spots. With several more teams added from outside the CPS, meet officials moved up the boys start time to avoid any chance of inclement weather.

The girls started on time and just as she ran a week ago in the CPL final, senior Ella Behrens of Whitney Young got out to a big lead. She led her foes through a solid first mile and later at two-miles in 11:38. Her teammate freshman Daphne Murray trailed in second. After her, it was a swarm of Huskies from Oak Park-River Forest mounting a strong charge. Behrens would complete her alternate course tour in a personal best 17:37. Murray faded to fourth with a time of 18:34. OPRF would quickly close out the deal with all five scorers in the top 10 to score 26 points. Whitney Young 40, St. Ignatius 65, Chicago Lane 102, Jones Prep 142, Lincoln Park 170- all advance to the Niles West Sectional.

The boy's attack was similar in that Whitney Young senior Sam Rivera deployed the same tactic that his counterpart did in going out fast from the gun. Rivera checked in through the second mile in about 9:53. Seniors Julian Higueros and Charlie Nevins of Whitney Young battled together for second over the final mile. The Dolphins who finished second to Jones College Prep last weekend at City appeared to have the upper hand with less than a mile to go. As it would turn out in their favor, Rivera came home to victory in 15:04 followed Nevins over Higueros 15:33-15:39. Anthony Maida of Jones was a tick behind in 15:40 for fourth and the fifth finisher was Jacob Flynn of St. Ignatius who ran 15:44. Whitney Young won the title scoring 33 points. Jones took second 52, St. Ignatius 72, Lane 87, Oak Park-River Forest 139, Payton 180- all advance to sectionals.