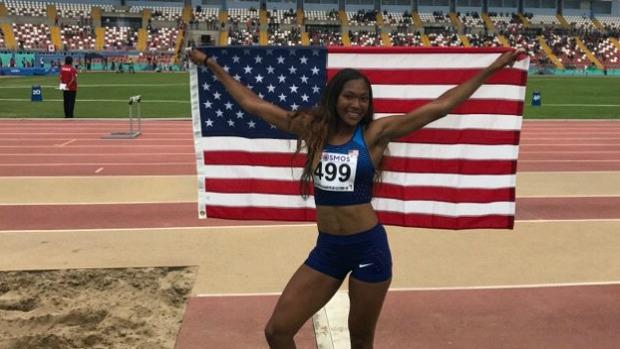 This has been a season of discontent for many collegiate track and field athletes which has led to defections. One such school, the University of Oregon has seen its share of athletes transferring out. The All-American list is long with such names as Tanner Anderson, Katie Rainsberger, and Lauren Rain Williams. But at the same time, we have to balance it with incoming talent such as Lexi Ellis... and Jaimie Robinson.

Yes, that's right. The former superstar from Homewood-Flossmoor who signed and competed at the University of Alabama last school year, has decided to transfer to Oregon.

There had been speculation for several months that Robinson may be on the move from the Crimson Tide. Things became evident after the 2017 Pan-Am U20 Triple Jump silver medalist did not improve on her legal high school personal best 43-10.5.

Robinson was among the top freshmen triple jumpers in the country. But she finished only 20th at the NCAA Outdoor Track & Field Championships with a jump of 42'7.75", which was tremendously behind her goal mark.

In deciding to transfer, Robinson harbors no ill feelings toward her former school.

"I'll always appreciate my first year at Alabama and the time I got to grow and learn under head coach [Dan] Waters, coach [Miguel] Pate and the team," said Robinson.

As for Robinson's new home, she stated it quite gleefully: "I am very much looking forward to working with head coach Robert Johnson, his reputation precedes him and the entire Oregon staff and family. They have been amazing and very helpful through this process." #GoDucks