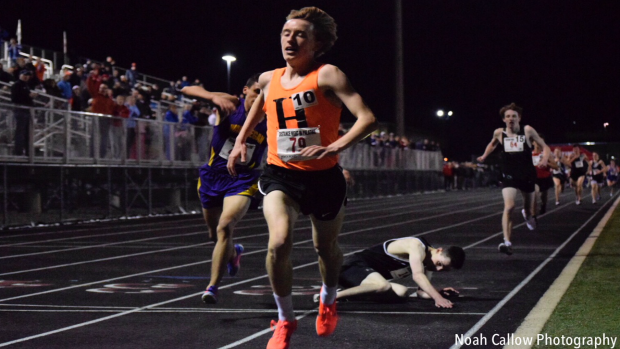 The intensity of the evening was incredible Saturday evening at Palatine High School. Here are some highlights. The full recap will be up Sunday afternoon/evening

800: After out of towner Shane Yamco of Riverton IL put up a fast 1:55.61 in the penultimate section of the undercard, it was up to Riley Wells of Rockford Christian to steal the show. Wells stormed home late on the final stretch to win in 1:55.38.

3200: Josh Methner was supposed to be one of the premier cover boys of the 2018 track season. But he had been missing from the scene until recently. The sophomore from Hersey busted out in a great way to win in a personal best 9:06.65- IL #4

1600: The featured event of the event lived up to the hype. A fast pace led by Whitney Young duo Clayton Mendez and Sam Rivera. They went through in about 2:03 before Mendez went to work. He would storm home for the win in a personal best and new US #2 4:08.64.

DMR: How about Downers Grove North fighting off one challenge from York's Charlie Kern to win in 10:10- US #4

800: Rachel Hickey got the match up that she desired and took full advantage of it. The Lasalle-Peru senior dropped a big personal best and state leading 2:10.70. Hickey and Stephanie Kriss of Highland Park rolled the first lap in 62 seconds

3200: Melissa Manetsch and Jenna Schwartz traded blows for the final 3 laps before the Libertyville senior outlasted the 2a xc champ from Waterloo in winning in 10:40.09.

1600: The surprise of the day had to be freshman underdog Marianne Mihas of Chicago Latin stealing the race on the third lap and streaming home in 4:55.68

DMR: Naperville North did a day and night action thriller. The final results for the Huskies was a US#12 12:12.54