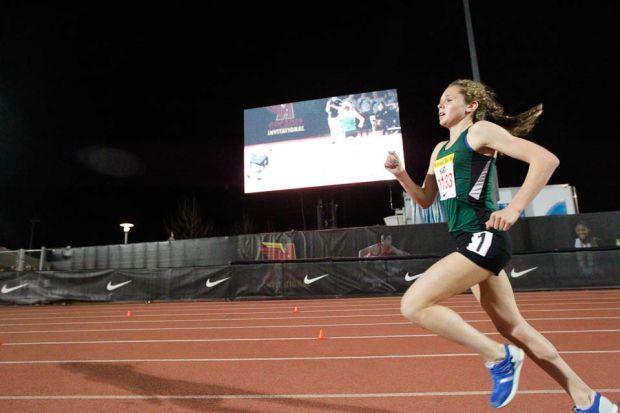 The girls running earthquake was predicted long before Katelynne McCants Hart hit the Illinois landscape. First, she was an outstanding gymnast before moving over to soccer in her formative years as a youth. While still very young and still in middle-school Hart busted out a 9:52 3k at AAU Nationals. That impressive mark inspired the article 'Cross Country on the horizon' and note:

"But the young lady to watch may not be Brooke Wilson but the incoming freshman Katelynne Hart of Glenbard West. Yes, [Lindsey] Payne's new teammate has produced incredible numbers on the track that would rate her at the top of all distance races (800/1600/3200) had she been eligible. Hart has not run a high school 3 mile but her 9:52 3000m translate to 10:36 for 2miles. It is about to heat up this fall at a course near you."

Let's be honest here for a second. Glenbard West has been a hotbed of individual distance talent over the past decade with the likes of Madeline Perez, Lisa Luczak, Lindsay Graham, and Payne. It is a combination of good talent, coaching, luck, and environment that produce super successful outcomes.

Prior to her race Hart did not feel exactly like Superwoman. "I wasn't sure exactly how it was going to go because I ran Arcadia [Invitational] a few weeks ago... I felt good but nothing special." Sometimes heroic efforts come when you least expect them to. Hart moved to the front of the class field that featured four cross country and track & field all-staters. Hart hit the 400 in 70.0 and was already up seven seconds on the field 600 in. 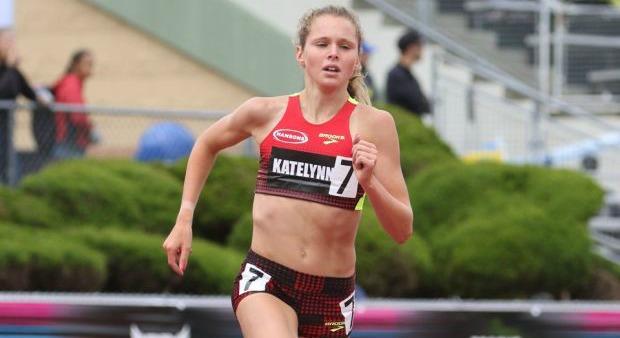 Hart is accustomed to fast starts because she is one of the elite prep distance runners in the country. So it was no surprise to see her pass through in 2:24. She has done it before, but the surprise may have been the 10 second gap between her and All-American Sarah Schmitt of Naperville North.

Although It was still very early, it became apparent that Hart was on a mission. She hit the 1200 in 3:40 and later the 1600 in 4:54. This would be the fastest time that she covered the halfway point. To keep things in perspective, if Hart decided to walk off the track and be done, she would have the fastest time in the state for that mark. Schmitt was at a respectable 5:12, Payne and Naperville North junior Alex Morris were 5:24.

The 5th circuit for those that may not know is the most important 400 of the race. It is a pivotal moment for all distance runners. It is where the mind tends to wonder, and all it takes is a 5-10 second lapse in judgement to totally ruin a great effort. What some runners do not realize is the race is halfway over and they are in a sense have been reduced to a miler. Those who fall off the pace are done. Those who make a move to assert themselves further cannot turn back. Hart was 6:09, Schmitt 6:31, and Payne 6:45. 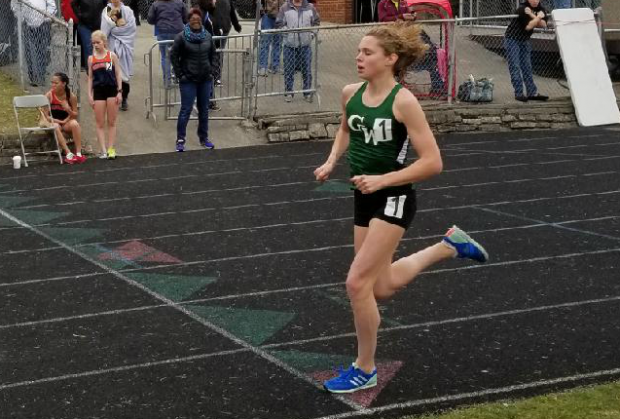 Hart finishes up a historic run with a nice round of applause (Jeff Bryant photo)
2400-
Hart continued to steam roll the field hitting the checkpoint in 7:25- we are talking about sub 10:00 pace folks. It is now obvious that some sort of record is going to be broken unless Hart completely fades. This is where Hart tailed off from sub 10:00 at Arcadia. The crowd was now on its collective feet as well as the sportsmanship from the athletes who lined the track in support of Hart.
The bell lap to the finish-
It was 8:40 on the gun lap for Hart. All she needed was an 80 second circuit break the watershed mark. If Hart could somehow dropped a 75 then she would surpass Kayla Beattie of Woodstock who ran 9:56.96 at the 2011 state meet. Hart did even better: she speeds home with a 71.xx and runs an unruly 9:52.02!!! The all-time Illinois record has been crushed and Hart was immediately mobbed by peers, reporters, and admirers. This moment will live on in track and field lore overall in the state of Illinois.
Hart becomes the #2 all-time performer as well as performance at 3200m. Overall, with 3k/3200/2mile conversions the performance is #5 all-time.
Congrats to Katelynne Hart on her fine performance!