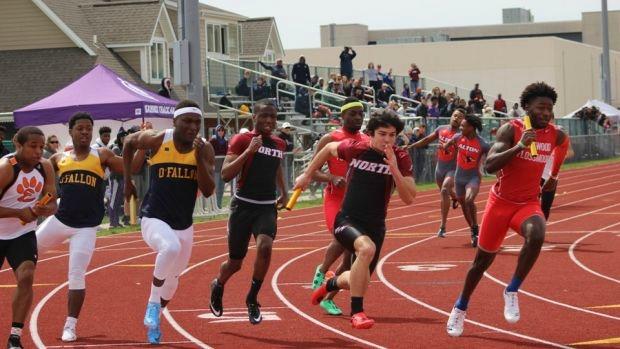 Approximately 14 Boys' teams gathered for the Winston Brown Invitational held at Edwardsville's HS Winston Brown Field. All eyes were on the the pre-hyped Marcellus Moore (So) of Plainfield North who won both the 100 and 200. Moore won the 200 in a meet record time of 21.28, enabling him to produced the top sophomore time in the country. Later he capture the Century with a time of 10.80 for the 100 meter dash. Moore also anchored the 4x100 meter relay that consisted of Canyon Bownes, Brian Registe, and Anthony Capezio to help secure the win for Plainfield North over Homewood-Flossmoor who finished in 41.90. Plainfield North's time of 41.85 was good enough to also break the previous meet record of 42.07. Another sophomore who competed well was Jermarrion Stewart of Collinsville, running both the 400 and 200. Stewart took home the win in the 400 in 50.29 and followed that with a third place finish in the 200 meter dash.
It was a one man show in the hurdle races when Matt Lewis-Banks (Sr) of Homewood-Flossmoor captured first place victories in both the 110 hurdles and 300 hurdles. Lewis-Banks crossed the line for the 110 hurdles in 14.82 and was followed by Connor Artman (Sr) of Carthage who finished with a time of 15.54. Lewis-Banks ran a time of 39.46 in the 300 meter hurdles, while Artman ran 39.56 to finish second. Artman had earlier won a spirited battle in the long jump, defeating fierce competitor senior EJ Burress of Homewood-Flossmoor 23-6 to 23-5.5. While both efforts were outstanding they were wind-assisted.
Edwardsville had strong performances in distance events, including the 4x800 and 4x400 meter relays. The 4x800 meter relay consisting of Franky Romano, Roland Prenzler, Zach Walters, and Wyatt Hennig ran a time of 8:14.61 to finish behind O'Fallon who won with a time of 8:02.27. Romano (Sr) followed the 4x800 with the 800 meter run where he placed second in 1:57.86.
Jacob Bryan (Sr) of Carthage won with a time of 1.56.43. Romano had taken the early lead in the race, but the two ran stride for stride as they hit the back stretch of the final lap. Bryan managed to surpass Romano coming off the final bend and held him off through the finish. With little time between races, Bryan returned for the 1600 meter run where he ran much more conservative through the first three laps. Running in the back of the lead pack, Bryan made his move with 300 meters to go and never looked back; he placed first with a time of 4:26.71, followed by Omar Paramo (Sr) of Plainfield North in 4:28.48 and Prenzler in 4:30.94.
Romano also ran a leg in the 4x400 for Edwardsville, which placed second behind the O'Fallon team that consisted of Roderick Williams, Taylor Lehman, Ryan Somraty, and Quan Cobb. O'Fallon finished in 3:27.74 and Edwardsville 3:28.49.
In the field events, the highly anticipated Quincy junior discus thrower Jordan Johnson got into the ring. The US #2 Johnson had come to show why his 196-3 best was not a fluke. With all eyes on him, Johnson appeared a bit tight with a foul and throw of 159'. He did get on the board with a series best 184-4. But the underrated Jordan Hawkins of Roxana was an inch better at 184-5 despite four fouls.
Edwardsville boys placed first as a team with a total of 130 points. Plainfield North was close behind with 127 points, while O'Fallon was third with 112.5 points. Homewood-Flossmoor was fourth and Collinsville placed fifth.