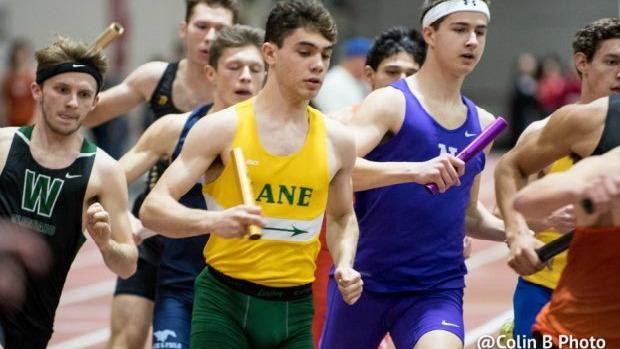 For the first time this season it is expected to feel like Spring in Chicago. The Fahrenheit is expected to be in the mid 60s by the time first race drops at 4:30p. Warm temperatures usually brings great performances and with this being a window of opportunity for teams and individuals to show off.

With the hype of the winning 4x400 relay walking away with 10 hot pizzas, this may be the most anticipated small mid-week meet in many years. Check out some of the entrants involved:

#1 track and field athlete in Illinois Marcellus Moore (So., Plainfield North) will be entered in four events: 100, 200, 4x1, 4x2. Moore is coming off of the best indoor campaign for an Illinois speedster as he copped All-American honors in the 200m. Moore may walk away with the state lead in the 100 and 200 by the end of the evening. He may feel some resistance from 2017 Century all-stater Bobby Nuzzo (Sr., Mundelein).

Clayton Mendez (Sr., Chicago Whitney Young) is one of the premier distance runners in the country. Mendez recently ran a sizzling 9:00.76 (3200m) at the prestigious Arcadia Invitational. He currently ranks #2 in Illinois in the event. Mendez will drop down in distance and compete in the 800m. His personal best 1:55.76 could be challenged.

Sam Rivera (Jr., Chicago Whitney Young) is the second man in command for the Dolphins. After running several solid efforts in the 1600 (4:20), Rivera is entered in the 800 and will challenge his teammate Clayton Mendez for the win.

The event to watch in terms of depth is the 1600. Look for cross country all-stars Omar Paramo (Sr., Plainfield North) and Conor Perreault (Sr., Niles North) leading the charge. But also entered is Robert St. Clair (Jr., Mundelein). St. Clair is one of the top distance runners in the state.