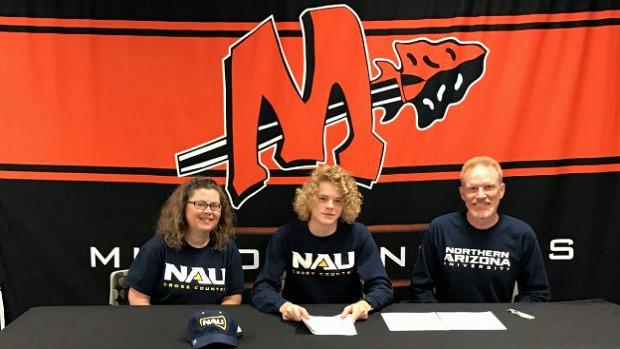 If you recall the magical time when Jim Knudsen and Soren Knudsen became the first ever father-son duo to win individual state cross country titles. Jim was the first to do so for Lockport High School in 1981. Soren followed up in 2016- 35 years later for Minooka High School. So that can lead to the question: doesrunning run in the family? For some families it may.

The Kern family is a great running family. Elmhurst (York) senior Charlie Kern Jr. is a six-time state medalist. Younger brother Ethan Kern is the next great runner that ran a 4:24 mile last year as a freshman. Ethan's his twin sister Emma Kern may not be the fastest Kern, but she still qualified for state in the 4x800 last year, and of course the father of the bunch, Charlie Kern Sr, the current coach for York High School. Kern Sr. won a 1600 State title in New York and earned All-SEC honors in Cross Country and Track & Field while he attended the University of Kentucky.  Mom Lynne Segreti Kern was also two time IL all state XC and member of NCAA nat champs at U

Hamilton Southeastern IN senior Gabe Fendel won the 2017 Cross Country State Championship, the 2016 1600m state championship, was a 2016 All-American Two-Miler, and a 2016 Foot Locker All-American for XC. His dad John Fendel was the 1990 Indiana state cross country runner up while competing for Warren Central. Prior to being a star record breaker at Warren Central, John's older brother and Gabe's uncle Vince Fendel held the 3200 and 1600 records. Gabe's mother Solange de Souza competed in the 1996 Atlanta Olympics Marathon for her native country Brazil running a very competitive time of 2:34.

Senior Wes York of Aurora (Waubonsie Valley) had mom, dad, and grandfather compete as marathoners. I asked Wes, "Do you think them being marathon runners helped with your success you have at running now?" He said, "I think their experience with healthy running as well as the love of the sport helped [tremendously]."

Senior Phillip Hall of Danville, a three-time state medalist, comes from a family of hurdlers. His dad Kevin Hall was the 110m State Champion in 1985.

Kevin Salvano, the 2015 3A Cross Country State Champion had a brother named Steven Salvano run for Buffalo Grove. Steven was very good in that he had a 3200 PR of 9:28 and a three mile PR of 14:37. Kevin currently is enrolled at Notre Dame.

Lyons Township senior Danny Kilrea, the 2017 3A State Champion for XC, All-American at both Foot Locker and NXN for XC, and All-American in the two-mile, has a brother named Kevin Kilrea that ran for Lyons Township. He had a 3 mile PR of 15:25. Older sister Keegan Kilrea was an all-state who placed 12th in the state cross country championship with a personal best 17:31.

Zach Kinne, a 3-time State Medalist junior for Neuqua Valley, took 4th place at the 3A State for XC, has a brother by the name of Austin Kinne. He had a three mile PR of 15:05 and currently runs for Washington & Lee College.

Miles Christensen, a 2017 3200m state medalist for Downers Grove North, has older brother named Zac Christensen currently runs for University of Washington in St. Louis. Zac had a great high school career he was an all-stater in the 4x800 and he had a three mile PR of 15:06.

Junior Matt Moravec, a 3200 State Medalist, has an older sister named Emma Moravec. She was a 6-time State Medalist and a runner up for the 800 title in 2017.

Jack Pifer, a sophomore at Edwardsville, has an older brother Stephen Pifer, who was a State Champion for Cross Country in 2002. Stephen also ran at Edwardsville

Jacob Kluckhohn, a sophomore at Wheaton-Warrenville South, has a mom (Kari) that was a Wisconsin State Champion sprinter and won a National Title in the 4x400 and his dad was a marathoner.