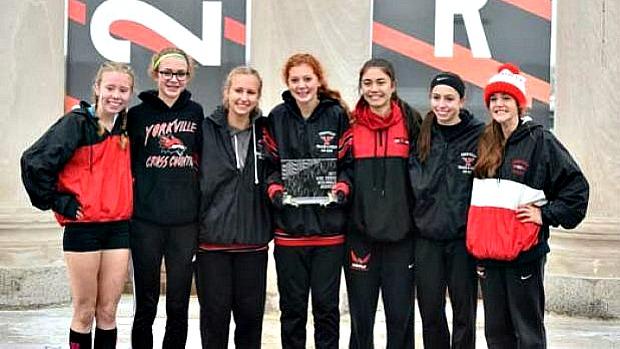 How good is this team: The Foxes have five state championships under their belt courtesy of the 2A classification. The best team in that run was the 2015 edition that produced four all-state athletes and a 17:36 per girl scoring average (3m). But a compelling argument could be made that this year's team could be the best ever in the program's history despite finishing second to Naperville North at state. The production in Peoria saw three all-staters and a 17:23 per girl average. Plus, it was near total domination against everyone except for the times they faced argueably the best team in Illinois history Naperville North... the Foxes will have to replace regular Olivia Borowiak (Jr.) for NXN due to injury.

Alyssa Edwards (Sr.)- has been our number one runner almost all year long, and has consistently developed into a tremendous runner over her four years in the program.  She has elevated to another level during her senior season, and most important been a great leader for us this year. As much as she believes, her team will believe!

Helena Klerenomos (Fr.)- is a freshman of few words, but big impact.  She was highly anticipated and lived up to every expectation this season.  She is a very hard working young athlete, that takes direction and follows leadership easily.  She is unfazed in big meets and is poised to develop into our number one runner in the future.

Emily Eberhart (Jr.)- has a competitive streak unrivaled by many.  She has perceived through many personal obstacles over the past few years, running at her best in the state meet and NXR.  With her unique training program and the work she puts in without coaches watching, makes me very proud of her becoming an All-State cross country athlete and running great at NXR.

Sara Klemm (Fr.)- has excelled beyond my expectations as a freshman. From day one of summer running, she has been consistent and determined in everything she has been tasked to.  She has gone from a potential top seven runner at the beginning of the summer to a staple in our top five, by the end of the state series.  She is a great example of believing in the process and daily hard work paying off.

Hailey Simmons (Fr.)- is, as a freshman, a newcomer to our top seven and recently progressed into being a top five runner for this team.  She has been a work in progress, making steady improvement throughout the season.  She didn't run track as an eight grader, so it has been a steady patient progressing approach that has paid off this season for her.  She is just starting to hit her stride.

Nicole Greyer (Jr.)- is a talented junior who ran some as our number one runner, freshman and sophomore year. In spite of some setbacks this season and a couple of stress fractures from 2017 track, has persevered and looked increasingly good recently. Nicole is finally looking more like her old self in her training and seems to be on her way forward mentally!

Sam Moreno (So.)- is a sophomore in her first year on Varsity.   She has shown great potential with a strong track season and and great training summer but has dealt with low iron this season.  She has flashed top five team potential during the season, and will be a consistent contributor on varsity in the near future.