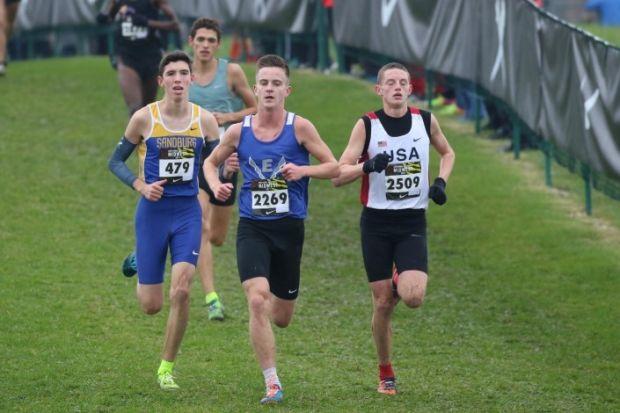 Timing is everything in sports. Cross Country is no exception. The team and individual favorites came in and took care of business as expected. Sort of... LaVern-Gibson course in Terre Haute played host to an exciting boys and girls meet. The undercard races are usually an indicator to what is to come with the championship realm.

The boys championship kicked things off with exploding fireworks and a steady stream of light rain. The first kilometer was the usual fast revolution that ran just under 2:50, and soon after that a front pack formed with several key runners who figure into the Portland bound puzzle. Danny Kilrea (Lyons Twp. IL), Dustin Horter (Lakota East OH), Dylan Jacobs (Sandburg IL), Gabe Fendel (Hamilton Southeastern IN), and Clayton Mendez (Chicago Whitney Young) were at the head of the pack through the first mile in 4:40 and later 2k in 5:50. Kilrea, the defending champion coming in, played the aggressor by continually pushing the pace whenever he wanted. It was just before the 3k that Kilrea struck another gear and opened a separation from his peers.

The once formable pack of 13 was Kilrea and a string of others. The gap appeared to be 20-25 meters. However, the move was premature and too far out from the finishline.  Horter led four other chasers which assited him in closing down Kilrea. Conant Smith, the Ohio D1 runner-up from Middleton, secured himself among the riches if he could hold on for the final 700m. Horter joined Kilrea for the final straight sprint fest. Horter looked completely relax and was able to pull just ahead with meters to go for the win in 14:57. Kilrea took second in 15:00. Smith earned his first trip to nationals by taking third in 15:05. Jacobs was healthy enough to hold on against Mendez for fourth 15:09-15:11.

#1Downers Grove North won the team battle with an absolutely dominant performance just as they had at the 3A state championship a weekend before. The Trojans led by Jacob Ridderhoff's 28th place which triggered an 18 second spread. It was nothing to it in the 104-164 win over Indiana state champion Carmel. Lyons Twp. is from the same dominant West Suburban Conference (Silver) as Downers North, placed third with 167 points. Neuqua Valley collapsed a bit late in the race took 4th with 193 points. 8 of the top 10 teams were from Illinois (5 from WSC Silver). 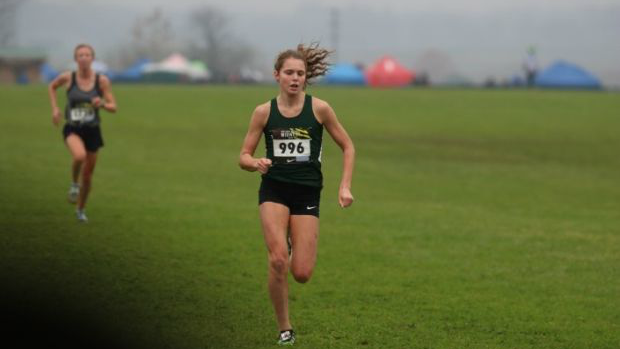 The girls race followed the boys in almost a similar methodical pack formation. Defending champion and undefeated Katelynne Hart has really learned new tactics in her racing portfolio. She did not go to the front and try and blow away the field. She knew that she was on enemy turf against Indiana champion Emma Wilson (Greencastle) and other great state champions and deep pocket runners. Instead she chilled for the opening kilometer.

By the first mile in 5:25 it was easy to see that Hart was going to subtly chip away from her opponent's ability to defeat her. Taylor Ewert (Battlecreek OH), who is a steeplechase veteran, fought with fellow Buckeye state resident Gracie Sprankle (Oletangy Liberty), D1 state champ Morgan Gigandet (Troy), and Juliette Keller (Medina).

Hart moved the metrics through 3k in 10:27 and 4k in 13:56. It was there that she put the foot on the pedal for separation against Wilson and the rest. The win was close on paper but Hart was in total control when she decided that she had enough company around her. The winning time of 17:28 was significantly slower than last year's 17:05, but it was still a great win heading into nationals. Wilson ran 17:33. Newcomer Sprankle took third in 17:36, Ewert got 4th with a time of 17:44. Indiana Unversity bound Sarah Schmitt (Naperville North) got the 5th place spot running 17:45. She will not need it since her team advanced as winners. That means 6th place finisher Gigandet moves on to Portland and making it three Ohio girls on the individual team.

Top ranked Naperville North did not mess around with Schmitt and Alex Morris (10th) leading the upfront charge.  The Huskies scored 85 points to win and earn their sixth straight trip to Portland. Yorkville who has run well all season finally earned their first berth to nationals after some heartbreak over the years, took second with 130 points. The Dark Horse Distance Project better known as Barrington was third with 166 points. Barrington upset a great Centerville OH team and should get at-large consideration.