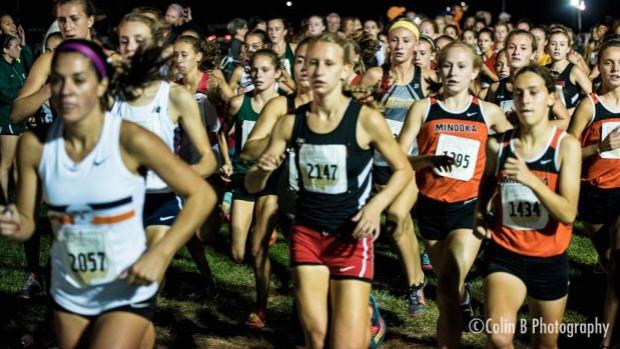 -It's not one, it's not two, it's rather the top three teams in the state meeting one more before we head into the state series. Naperville North, Downers Grove South, and Yorkville are indeed the top teams in the state. Furthermore, there are seven other ranked teams that makes 10 of the top 25 in meet- a super power invitational. Naperville North is US #2 and it is safe to say they are the favorites after winning the national level Roy Griak Invitational which included DGS and Yorkville. The deep field will feature complementary teams making it feel like a state championship in early October.

As great as host Naperville North has been they are not satisfied with their mid-season success. "We want to get better," said head coach Dan Iverson in advance of the meet. "That's certainly why we want the best teams there, so regardless of how we place, we want to emerge a better team." The leader and top runner senior Sarah Schmitt is one of the best runners in the state and she will lead her mates as a low stick against all the challengers. She could possibly finish as high as second in the race followed by strong teammate junior Alex Morris. The scoring split may be a little high but it is deceptive because the two runners are so good. Iverson once stated that this team is better than the one which finished 10th at NXN last year. He is confident of his team's opportunities Wednesday night: "we will have to run our race very, very well, and I'm really confident we will do that."

Downers Grove South is a very solid team that is in contrast of Naperville North. The Mustangs are deep of course but they don't have a true low stick runner. Sophomore Brenna Cohoon is the number #1 runner with the team's best time of 17:43. This will be another great experience for the Mustangs as they move toward the post-season run. "We are excited and honored to be competing in the Twilight meet with so many other good teams," said DGS Head Coach Doug Plunkett. "My girls have been working hard all season and this meet will be a great test of our progress."

Another team who knows alot about competing in big time meets is Yorkville. The Lady Foxes recently placed 7th at the Griak Invitational. Senior Alyssa Edwards placed 12th for her team in that championship. She should lead the way for a strong team whose goal is to compete at a high level according their coach Chris Muth. "We are excited to see some of the top teams in the state that we haven't yet got to compete against such as Glenbard West." Yorkville will have to overcome a high scoring split if they want to keep pace with the elite competition in this field. He added: "clearly, at this point Naperville North is the top team to beat in the girls division in Illinois, but after that, the depth is very strong with any combination of up to eight teams being able to earn high honors after the points are counted."

Hinsdale Central, Wheaton-Warrenville South, Glenbard West, and Minooka are great programs respectfully. Look for them to latch on early and make things very uncomfortable for the top three favorites.

The foot race to the tape will be academic if a rested Katelynne Hart is on her game. Now as one of the nation's elite distance runners from Glenbard West, the sophomore sensation is ready to show off. Several weeks ago at the Peoria Notre Dame Invite, Hart enjoyed a "day off" running 16:35. She hinted at that meet to know when to push the pace and when to let things come to her. The Twilight is something that is in her notebook and you can bet that Judy Pendergast's large meet record of 16:15 was jotted down. After Hart expect to see her teammate senior Lindsey Payne, Schmitt, Morris, and Minooka senior Emily Shelton chase the runner up title. The weather is expected to hold off after a morning to mid day rain splash. With the conditions before dry for most of the season, the flat and fast course should be good to go.