All kids want is an opportunity to succeed. It seemed as though on the morning of the state championship amid severe weather, it was time to reflect. Luther North was one such school that came to mind. After "surprising" everyone but themselves from a great preliminary round on Thursday, the north side of Chicago school was in position to win a trophy. Perhaps a little more motivation to take things even further because the school will close its doors permanently in June. The final MileSplit Illinois power rankings listed Warrensburg-Latham, St. Joseph-Ogden, and Luther North as the top three squads. The final tally would be Luther North 59, Warrensburg-Latham 52, and St. Joe Ogden 42. The icing on the cake would be sweet and complete. 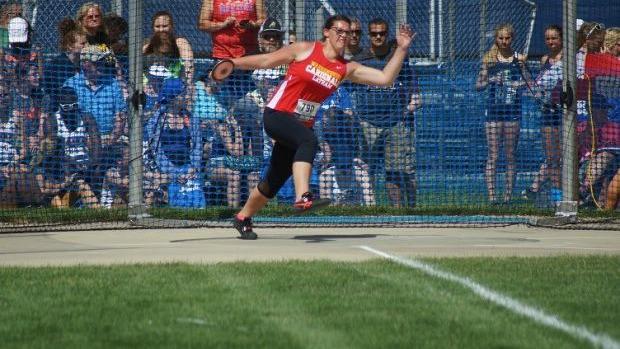 Kathleen "KD" Young (Sr., Warrensburg-Latham) took a moment to smile and reflect after the shot put round on Thursday. "I think I left my mark here over the four year with double state championships," Young said confidently. "I am going to miss being here, throwing in Charleston and competing against the other girls." There wasn't much to Saturday's final performance for Young but to hold serve in the shot put where her best toss remained the 48-11.50 carry over from Thursday. In the discus, it was a bit of window dressing for Young who moved from 147-8 to 150-0. Overall, it confirms that Young etches her name among the all-time great throwers in Illinois. She may even be the best of all-time when it all said and done.

LJ: Paige Yoder (Jr., Rockford Keith Country Day) used a prelim effort 18-1 to hold off Bryn Guthrie (Sr., Litchfield) who could not take advantage of an extra day of rest. Guthrie remained at 17-11.

PV: Classification leader Kristin Slaughter (Sr., Effingham St. Anthony) got sweet redemption from when she had to bow out of the Illinois Top Times meet because of illness. Slaughter swatted away some fierce competition in a personal best winning effort of 12-6.

HJ: The former junior high school prodigy now sophomore Daelin Switzer of Decatur (St. Teresa) makes it 2 for 2 after she won a close battle vs. Kiah O'Neal (So., Rock Island Alleman) and Kenli Nettles (Fr., Arthur). Switzer moved past her foes with a 5-6 clearance against 5-5.

TJ: The "indoor" champion Tarynn Mays (Sr., Duquoin) remained undefeated and even added necessary inches to pad her lead against runner up Danielle Taets (So., Orion) 37-2 vs. 37-0.75. 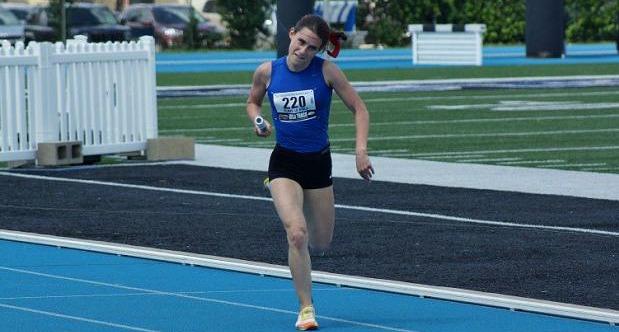 No one outside of the Effingham running community knew how good Anna Sophia Keller was as a freshman four years ago. All the St. Anthony superstar did was against Illinois competitors was win. Keller had no control over the competition that she faced during the state series because she had to compete in 1A. But there is no doubt by the statistics and post-season cross country accolades, Keller deserves to mentioned as one of the greatest distance runners in Illinois history. She did not have to maximize full effort this season after winning her fourth harrier state title last fall and then going on to Portland, Oregon and earning All-American honors. Keller did not have to improve on her 10:26.76 and 4:54.92 stats to let anyone know she is among the best in Illinois. Keller went out and competed in her own terms and laid a foundation for others to follow behind her. On Saturday, Keller won the 3200 (10:36.64) and (4:58.42) against long time challengers Daly Galloway (Sr., Dwight) and Arielle Summitt (Jr., Urbana U High). Keller will now set sail off to the University of Notre Dame this fall.

Summitt won the 800 for the second time in a row against all outs. During the last portion of the season she was dealing with low back pain which hampered quality performances. Summitt appeared to gain confidence from the extra day of recovery from Thursday to get back treatment. As well the mental recovery did her well. Summitt took charge right away against the favorite Audrey Harrod (Sr., Hinkley Big Rock). The hard pace went against a stiff wind on the homestraight. Summitt was still able to cross in 64 seconds for the first lap. It was pretty much academic as she continued to pull away from the field to win in 2:13.17- more than three seconds better than Harrod and the second fastest time among all classes. 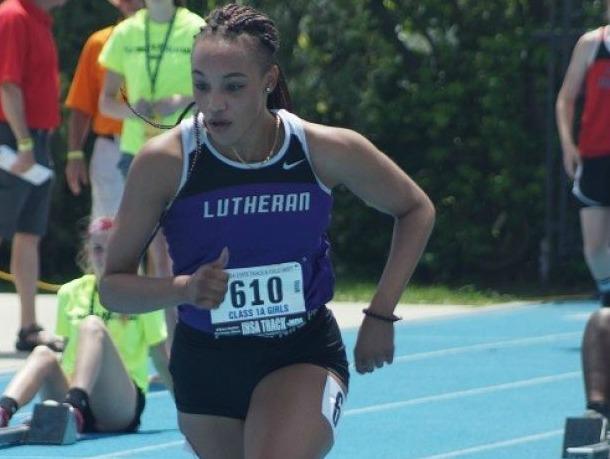 Defending 100 and 200 champion Courtney Sockwell of Rockford Lutheran knew coming into the state championship that her senior season had not been the best. Most of the girl talk was about Jaimie Robinson (Homewood-Flossmoor), Amira Young (Jr., Chicago Whitney Young), and even the junior Martin twins Katina and Tina. But Sockwell had a plan she would say after Thursday's prelim round. "I did something coming in on purpose to make the girls feel relaxed," she said in assuming they would be caught off guard somehow. The truth of the matter was Sockwell came out and ran up to her potential. The wind legal 11.97 was real as was the 200 clocking. The final was even better 11.95 despite a strong +3.5 tail wind. The end result was a dominating win over a solid field. The deuce was even a bigger win (25.33) into a nasty head wind -3.0. Sockwell got her redemption and silenced the naysayers.

Kayla Armstrong (Sr.. Luther North) had the second best day outside of Sockwell. She placed second in the 100, anchored the 4x1 relay in comeback fashion over the final meters to beat St. Joe Ogden 49.41-49.50. Armstrong would later win the 400 in 57.14- a big personal best that seemed to further ignite the team's quest for a team title. Armstrong and fellow senior Jada Williams closed out their high school careers with 4th (25.90) and 7th (26.51) finishes.

100HH: The little known Janika Peitzmeier (So., Leroy) produced a big upset over favorite Parker Francisco (Sr., St. Joe Ogden) . Peitzmeier got a great start and roll over the field that could not close in her. The time 14.55 (+2.5) was just over the allowable for legal status, but nevertheless it was a huge victory for this event's future.

4x800: St. Joe Ogden set themselves up for the win until about 350m to go anchor Faith Houston tripped on the track rail and the baton fell inside the track. Instead of picking up the baton and running the same direction that she entered, Houston zipped forward as her continued progress. The result was a disasterous DQ instead of 4th place. Deemack would enjoy the spoils in a class leading 9:40.25.