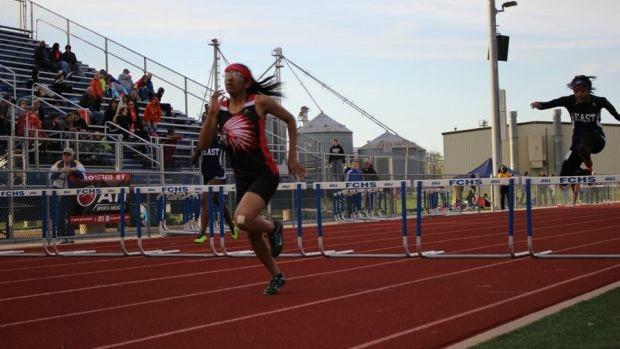 It was an exciting evening at the Freeburg Girls Invite

It was an impressive day for high school athletes that competed at the Freeburg Girls Invitational.  Freeburg, who has shown to be pretty dominant as a team, carried on that tradition by winning the meet with a team score of 82 and getting two meet records in the 4x400 and 4x800 meter relays.  Belleville East came in second in the team scores with 72 points, while Mascoutah, Mount Vernon, and Waterloo placed third, fourth, and fifth.

Some impressive showings were by Mount Vernon runners Tredaja Harris who swept the 100-200 meter duo in meet record fashion, and Kate Bushue who raced a great 1600 meter run to catch Waterloo's Jenna Schwartz at the last second; defending her title and lowering her own meet record by more than 10 seconds.  Morgan Atchison (Chester) won the 300 meter hurdles to better her own meet record, while workhorse TyKiaza Jones (Granite City) won the 100 meter hurdles while also achieving a new meet record.

Also running well was Seleiya Wilson who got the meet record in the 800 in 2:24.42.  Meanwhile, in the 400 meter dash, Jess Kattenbraker of Chester, Jadah Heidel of Nashville, and Maddie Valerius of Waterloo all had strong showings.  The three all crossed the finish line with only hundreds of a second separating them.  Valerius, the freshman, was able to get the win in 1:02.53.