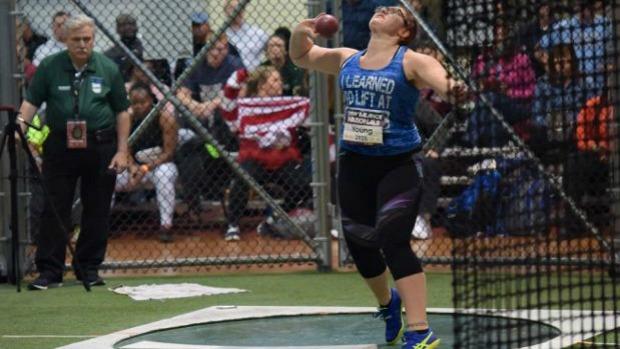 Day two was a bit more lighter than day one for the already light Illinois contingent in New York City. Still there was some hotly contested and interesting action inside the Armory.

Kathleen "KD" Young has been a road warrior the entire winter with her final destination being the cozy New Balance Track and Floor Center.  The goal of course for the Warrensburg-Latham senior was to do her best against national record holder Alyssa Wilson of New Jersey. Both were clear of the field after the first throws. Young connected on her best effort which was 51-9 in round three. Wilson would toy around around with the field but eventually put things away with a solid 54-5.25. It was well short of the meet record and national record which stands at an incredible 57-5.5. Young finished runner up by almost four feet. She will get one more opportunity to improve her US #2 52-4 at the Illinois Top Times meet in two weekends.

Zachery Bradford was ready for the big time a weekend ago when he copped the state best/personal best 16-6 at the U of I Armory. Bradford, a junior at Bloomington HS, indicated that he wants the state all time best and eventually go over 17-5. He gained very valuable experience in New York in capturing another state lead 16-9.5. It was the fact that he competed against the best high school vaulter in the world Armand DuPlantis of Louisiana. It was not just admiration in watching DuPlantis sky over 19-feet! In fact, he went an incredible 19-1 and a rock solid goal for Bradford to follow as he will see his amazing peer another year before moving on to college. 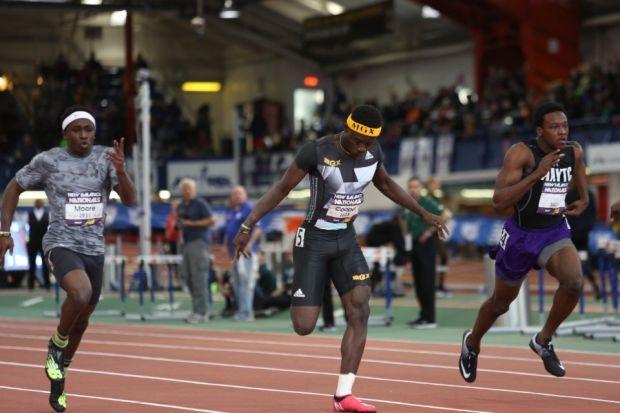 Marcellus Moore returned for a second day after a very productive initial contact the first day. The freshman Moore from Plainfield North was pitted in a lion's den for the 60m championship. This area contained no emerging elite or "rising stars", it was all stars and above. One such star was US #1 J Johnson of North Carolina. He came out blasting in prelim. Moore was situated in heat three against one of the most talented sprinters in US history by the name of Tyrese Cooper. Cooper is a sophomore from Miami, Florida who has run a mind boggling 46.01 for 400 indoors (#2 all time). He has broken two high school records this season (300, 500). It would be easy to be intimidated by such talent let alone in the next lane. Moore is a seasoned vet despite being only 14 years old. Moore ran well out of his block with a controlled but serious 6.93. He would move on to the Sunday's semi final.