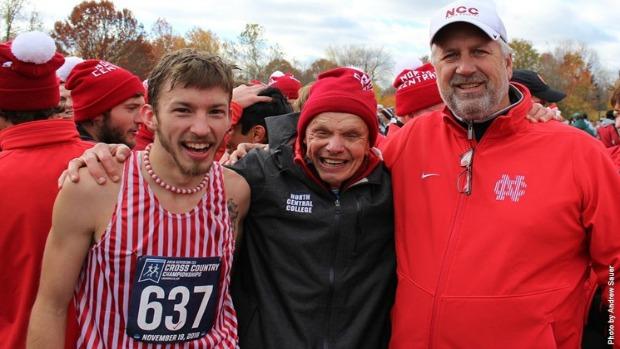 LOUISVILLE, Ky. (Nov. 19, 2016) - Living up to their unanimous No. 1 national ranking, the North Central College men's cross country team surpassed even their own expectations on Saturday at the 2016 NCAA Division III Cross Country National Championships, overcoming sub-40 degree temperatures and over 40 mile per hour wind gusts, running away with the 17th national title in program history, while setting a Division III record for margin of victory with all five scoring runners earning All-America honors in the process.

North Central finished with a combined 60 points, while the State University of New York at Geneseo finished a distant second with 204 points and the University of Wisconsin-Eau Claire rounded out the top-three totaling 209 points.  The 144-point winning margin breaks the previous record of 131, also set by North Central during the 2009 national championships.

Zach Plank led the charge for North Central finishing in ninth-place, carousing the 8,000-meter course in a time 24 minutes, 34.3 seconds.

"As the point man, my job is to score the lowest number of points for the team," said Plank, "And when I looked back down the stretch and saw three of my teammates right behind I knew the race was ours.  This race wasn't won today though, we have prepared the last 365 days for this moment and all the miles and training we have put in led to this, I couldn't be more proud of the way this team responded after a disappointing end to last year."

The next four Cardinals finished within seven seconds of each other, staying together nearly the entire race as Al Baldonado crossed the line in 15th-place in a time of 24:40.5.  Dhruvil Patel and Ethan Adlfinger finished 18th and 19th, respectively, as Patel crossed the tape in 24:41.6 and Adlfinger in 24:41.9. Zach Hird rounded out the Cardinal scoring with a 24th-place finish in a time of 24:47.0.

This marks Plank's second All-America award after a fourth-place finish in 2015 and first time recognitions for Baldonado, Patel, Adlfinger and Hird, as 73 runners have now earned All-America status under the tutelage of head coach Al Carius.

"It's an unbelievable feeling," said Carius.  "This team worked so hard to get to this point, after last year's fifth place finish, the way the team responded this year by putting in the work in the off season really prepared us for this moment."

"I dreamed last night that we would win but I really did not expect it to happen like this.  These young men ran just a perfect race today and I could not be happier for this team and this program."

After getting pushed to the middle of the pack at last year's start, the Cardinals were positioned on the far right side of the start line this year and were able to come out of the start unscathed and near the front of the pack.

"We knew that we could not make the same mistake as last year at the start," said Adlfinger.  "We needed to get out to a fast, clean start and once we did that we just ran our race.

"Running at pre-nationals at this course earlier in the season really helped today, we knew coming in what to expect on the course and when to make the late push."

The team positioned themselves near the front of the lead pack early but let the more inexperienced teams set the pace with brutal winds creating havoc.  After 2,000 meters the Cardinals sat in second place, preserving their energy for a big push later in the race.

"We just positioned ourselves behind the groups around us to let them break the wind," said Adlfinger, "then we made our move around the 6,000-meter mark knowing we had preserved enough energy to make a late push."

Once the team made their move the race was all but over, as all five scoring runners finished in the top 24 with just one runner from SUNY-Geneseo placing in the top 56.

The University of Wisconsin-Platteville's Ian LeMere repeated as individual champion this season, finishing the course in a time of 23:40.4, almost 30 seconds ahead of the second-place finisher.