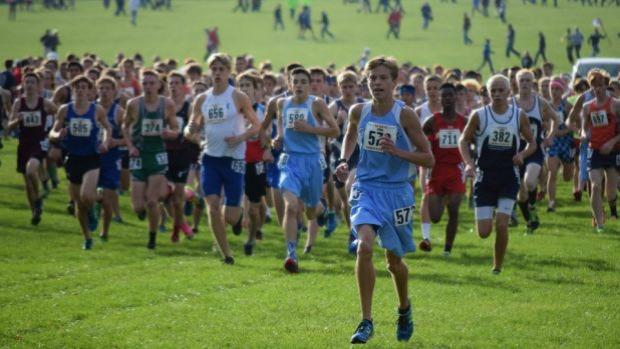 The opening race got out fast (Matt Jortberg photo)

(The fastest... and most efficient quick stop recap in the game. Just like the girls!)

Peoria was the town and Detweiller Park was the place for the annual pilgrimage for Illinois cross country fans. The weather and atmosphere to say the least was magnificent.

The prediction form may as well have been tossed into the nearby Illinois River because everything was off. We did not even mention in the preview that pre season #1 Shelbyville did not even make the big dance. How about Rockford Christian being delighted about being sent down from Class 2A shortly after the official start of the season? The Royal Lions would go on to finish fourth. The final regular season holder Freeburg had to settle for second. We never heard of Harvest Christian Academy as a cross country power. They were unranked during the pre-season. The team from Elgin moved through the regular season quietly before settling into the #4 slot. After winning the Oregon Sectional over Rockford Christian. The Lions won easy by 20 points with Michael Sisko (Sr.) leading the way. They used the same formula of strong upfront running and pack runners producing a 34 second split in getting the job done.

Brayden Hamblen (Sr., Rock Falls) was the favorite despite having one blemish on his record, a big 20 second loss to Tanner Chada (Sr., Hinckley Big Rock) at the Oregon Sectional. The #1 Hamblen had to wait a long time in getting his first state title. Wyatt McIntyre (Jr., Athens) hit the opening mile in approximately 4:48, and the threat of anyone challenging seemed all but over at the halfway point. Hamblen finally caught McIntyre with less than 200m remaining. The final verdict was 14:23-14:27. Both runners dropped substantial personal bests. McIntyre had never broken 15:00 coming into the 2016 season. 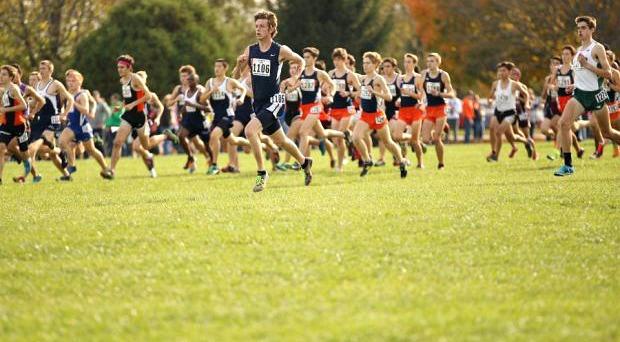 -There is a reason why Mahomet-Seymour is ranked #14 in the country or maybe underrated. Despite the defending champion Grayslake Central putting three runners inside the top 10 scoring wise including going 1-2 behind triplet seniors Jack and Matt Aho. The Titans simply destroyed the Rams as well as #2 Normal University. The beating was so bad that 7th man Gary Pommier (Sr.) just missed all-state honors at 27th place. Even if the Titans agreed to be handicap on their scoring with the 7th man the score would have been just 97 points and 1-7  mano a mano 31 splits!!

Jack Aho once again let the pace come to him. He went out front running comfortable ahead of Jack Franklin (Sr., Normal University) and his brother Matt. The opening mile was 4:41 and chasers not too far back. Jack did not pull away until the last half mile. Matt caught a tiring Franklin and moved into second. The brothers ran personal best 14:12 and 14:27. Brothers have went 1-2 in the past but you will be hard pressed to find another sibling perform well. Triplet sister Elizabeth Aho placed 60th and led her team to a 6th place finish. 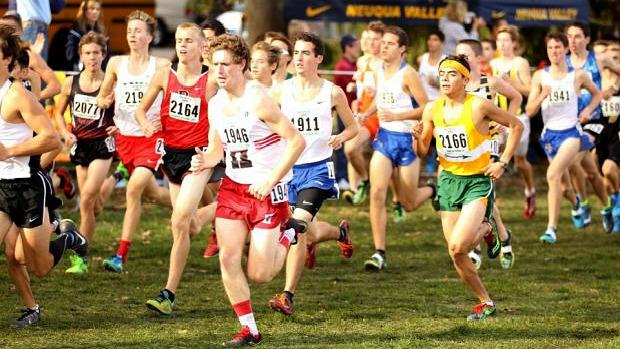 -It is hard to say if Neuqua Valley faced an internal stress or pressure this season. Coach Paul Vandersteen has a cool demeanor and that has trickled down to his team. One reason is he turns over his roster every year with a heavy load of upperclassmen. However, they the next group returns more ready than before. It is as if they are born to be success despite limited varsity racing. The Wildcats arguably produced a top five all-time effort in defeating a feisty Downers Grove North team who apparently had a lead late in the contest. The senior leadership led by Jackson Jett (Sr.), Jake Mceneaney (Sr.), and Matt Milostan (Sr.). All three earned all-state honors with sophomore Zach Kinne sandwiched in between at 17th place. Lake Zurich got their first state trophy ahead of Lyons Twp. and Chicago Whitney Young.

43 boys broke `15:00 making it one of the fastest ever meets. This fun fact is extremely interesting with the dilution of another classification in 2007. It only proves the depth and talent of Illinois. Soren Knudsen (Sr., Minooka) handled the fast pace which started the first mile in 4:35. Many of the subsequent trailers ran 4:42-4:45 including Neuqua Valley's pack. Knudsen did not take charge until the final mile. He was in the clear over the final 500-600 meters and pushed as hard as he could to break the magical 14:00 mark. He clocked a time of 14:02 which was one of the fastest in history.