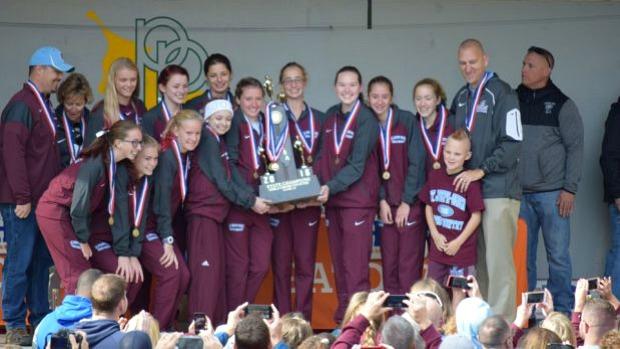 (The fastest... and most efficient quick stop recap in the game)

Peoria was the town and Detweiller Park was the place for the annual pilgrimage for Illinois cross country fans. The weather and atmosphere to say the least was magnificent.

-The outcome was never really in doubt for the Spartans who won their first since 2014 and third overall. SJO was preseason #2 vs. #1 Unity. The final regular season rankings swapped both teams making them the heavy favorites. Faith Houston (Jr.) led the way in 21st place for the Spartans and that seemed to trigger her teammates who produced a 50 second scoring split. Jordan Harmon (So.) did her best for Unity with a sixth place finish. Liberty was led by Katelyn Robbins (So.) in the 14th slot.

Anna Sophia Keller (Sr., Effingham St. Anthony) concluded a great IHSA career with four consecutive titles and becoming only the second Class A girl to do so. Keller ended any threat of an upset with a sizzling opening mile in 5:27 enroute to a 48 second win over Claudia Magnussen (Sr., Pana) 16:32-17:20. 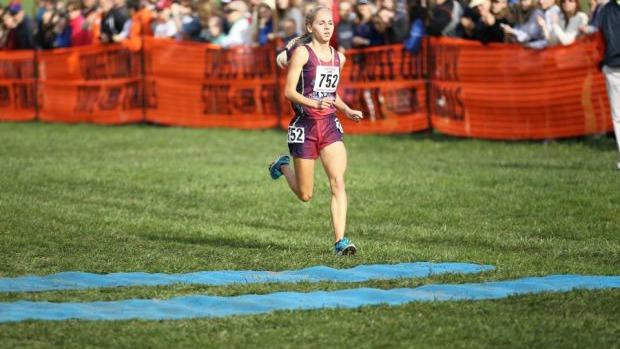 -The true battle of #1 vs. #2 had been building since the first big weekend of the season back in September. Preseason #1 Belvidere North had slipped to the second spot after losing to Dunlap at the First to the Finish Invite. Jenna Lutzow (Sr.) was not in that competition. The Blue Thunder came out swinging with Lutzow and rival Delaney Appino (Sr., Rockford Boylan) along with Grace McLaughlin (Jr., Rockford Boylan). They separated themselves from the swarm and would eventually finish 1,2,3. But it was the team battle that was telling. Lutzow's support came with two freshman in the top 15 on the strength of Madison Diercks and Gianna Sagona. Dunlap on the other hand had issues getting started, but top runner junior Franny Verville moved after the first mile. She would eventually place 13th and her teammates assisted with an outstanding 31 second split. However, it was impossible to make for what Belvidere North did with three runners in the top five scoring wise.

The individual battle indeed came down to Appino and Lutzow who completed against one another three times coming into state. It was just before the final half-mile that Lutzow increased her five meter cushion and expanded it to 20m and eventually out of reach and won by 10 seconds with a personal best 16:35.

-The air was extremely tense among a number of teams vying for a state trophy. Naperville North, Yorkville, Minooka, and Downers Grove South was included in the discussion. So the question all week was 'who wanted it more?' Naperville North was the first to strike a blow with good positioning before the first mile. Junior Sarah Schmitt led the way in sixth place followed by two other all-state athletes. The closing last mile was much better than last year in securing the sixth state title under Coach Dan Iverson.  Yorkville, fresh from 2A and five straight titles, did not wave the white flag easily to Naperville North. Only two all-state runners among the top seven with Nicole Greyer (So.) and Alexis Grandys (Sr.) was good enough to keep pressure on the Huskies. The Foxes' 46 second split was strong and barely enough to turn back defending champion Minooka. The Indians once again were led by the "triplets" Mackenzie Callahan (Sr.), Emily Shelton (Jr.), and Ashley Tutt (Sr.).

Freshman phenom Katelynne Hart of Glenbard West was a wise observer after the sectional round when she proclaimed winning a state title would be not be as easy as it looks. Indeed. Last year's runner up junior Lindsey Payne and Hart's teammate had to be secretly thinking about "enough is enough." A hard fought battle throughout each step of Detweiller was evident from a bird's eye. First mile, 1.5 mile, 2 mile, and 2.5 mile marks were TIGHT. It came down to teammates Hart and Payne who shook loose Callahan with less than 200m to go. Hart's superior jets propelled her to a three second win in 16:31.