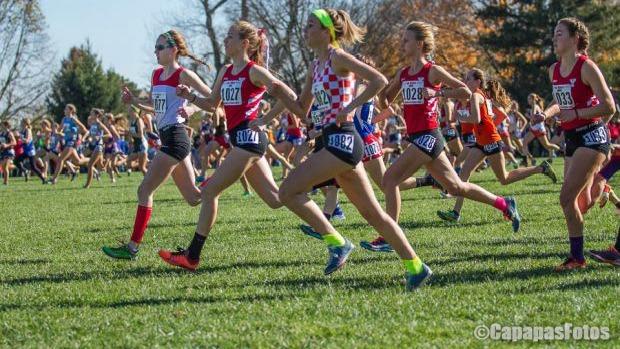 Head Coach/coaches: Doug Bradley/Bob Vance
Last year's finish: State Championship- 20th
Key returners: Courtney Hengehold (Sr.), Sarah Beth Wiegman (Sr.), Lily Becker (So.), Lexy Gilliam (So.)
Projected top 7: The girls above all have state meet experience, which makes them the frontrunners for the top spots along with newcomer freshman Sam Hengehold.
Newcomers: Hengehold, Kelsey Toft (Fr.) Adrian Wille (Fr.)
Coach Bradley's outlook: It has been a pretty rough off-season. Two significant knee injuries have taken two key athletes off the roster. In addition, junior Breann Wernie, a two-time state qualifier has decided that she no longer wants to run. Another important returning athlete was lost due to a military transfer. Summer mileage for the key returnees, while decent, has fallen a bit short of the established goals. Given the injuries and losses it would appear that earning a fourth consecutive trip to state would be a pipe dream but there is still some talent and heart on this team. It is critical that the girls stay healthy and that each one improves. It will take one heck of an effort but this group is capable of challenging for a Mississippi Valley Conference title and a regional title. Both of those tasks will be gargantuan given the terrific teams that Mascoutah,Triad, and Waterloo will be putting together this season. This season ends with a group of smiling, happy girls if they all share the workload. I'll be asking a lot of the five that ran at state last year. They aren't going to be taking many single-digit individual scores into the team score so everyone has to contribute. Pack running worked well late last season and if they buy into that philosophy early this year I think that gives them their best chance at success.

Tony's Take: The move up to 2A for the Illineks will be a new challenge that the program will embrace. The success factor for the private school will at least have standouts Arielle Summitt and AnnMarie Michael to lead the way. The all state athletes happen to be among the best in the state should transition up without any issues. Summitt has a personal best of 17:27 and won the 800m state title in 2:12. The key to making an impact will be adding a few extra pieces to the line up that graduated its vital fourth and fifth runners.

Head Coach: Matt Haffner
Last year's finish: Hinsdale Central Sectional- 12th
Key returners: Brigid Bendig (Jr.), Bizzy Brumfield (So.), Savita Gupta (Jr.), Abby Gaughan (So.),
Jenna Winfrey (So.)
Projected top 7:  Coach Haffner hasn't indicated his top seven as of yet, but he sees competition among a group of 20:00 -- 20:30 girls.
Newcomers: There might be a few who fit in according to varsity returnees.
Coach Haffner's outlook: This will be our first year of not being multiplied into 3A. We have only one returnee under 19:43 and track season was not a good one for our distance kids. Three of my five fastest returnees don't even run track (lacrosse, soccer, soccer). We've got a big squad with over 60 girls. Not much else to say. It looks a lot like last year minus one kid up front (Kyleigh Spearing).

Head Coach: Joe Zehr
Last year's finish: State Championship- 18th
Key returners: Meagan Moreno (So.), Tenley Dowell (So.), Aspen Gordon (So.), Sarah Honegger (So.), Macy Glatz (Sr.)
Projected top 7: Moreno, Gordon, Glatz, Honegger Dowell
Coach Zehr's outlook: Although we lost two sub 19 senior girls in Alyssa Klunk and Cassidy Waltz, we return the core of the 2016 girls varsity team. They have had a productive summer and are very ready to improve on their finish from last season. Although we lost some strong senior leadership from the 2016 team, the core of the team now has at least one season of experience and are ready to use it to drive them throughout the season.
Tony's Take: The Potters surprised many outsiders when they went from nobodies to somebodies in finishing among the top 20 in state. Four state participants return led by Meagan Moreno who finished 26th overall in Peoria. She missed be an all-state runner by two seconds. Hopefully, she can be motivated in moving up a notch after a not so great spring track season. Aspen Gordon is a person of interest who may intent on stepping up this fall. She was the team's 5th runner at state last year, but after a solid track season things could change. Morton be challenged by a stronger base of teams in its area once late October comes, so in effect depth and experience will have to come into play if they intend on returning back to state.

Coach Connelly's outlook: Since the Peoria Woodruff Invite in 2009, Montini has been ranked (except for a few brief times when the girls should have been ranked and weren't.)   This year looks to be very different, but you can never count out a team that shows character and works hard together.

Weidacher has made a big jump and appears to be a little off all state.  How much more improvement left in her is yet to be seen.   The drop off after the number 1 is significant.

Ritchie and O'Brien had good summers, but are well back from Weidacher.  As always, the key to team success on meet day is the last scorer.  There is work needing to be done.  We have to wear down the bottom of some shoes and sweat up some clothes in the next three months.

Billotte has never run before this summer but could factor in by the end of the year.

Projected top 7: The four state runners are locked in but after them is a mystery.

Tony's Take: The Senators enjoyed a good season last year that resulted in a top 15 finish. But the loss of mainstays Ali Goff, Natalie Motor and Sophia Gullo will be felt. It may be a challenge to get back to the level of 2015, but it won't be from the lack of effort. The team has lost three big pieces last year . The Senators will be in a somewhat rebuilding mode with young athletes.

Head Coach/coaches: Dan Daly/David Marshall, Amy Merrill
Last year's finish: State Championship- 21st
Key returners: Laura Katunas (Jr.), Maddie Hoffman Sr.), Kathryn Stender (Sr.), Madeline Cohen (Sr.), Liza Kaniewski (Jr.), Oliva Baker (So.), Jessie Sulgar (So.)
Projected top 7: Katunas, Hoffman, Stender, Cohen, Kaniewski, Baker, Sulgar
Newcomers: The Romans have six incoming freshmen plus a few new upperclassman who be expected to contribute to the team.
Coach Daly's outlook: I am very encouraged for this fall. We return our top 9 from last year plus there is a very talented group joining the team. It's a luxury of depth that we've not had in the past. I am confident we can defend our conference title. Compete for Regionals and Sectionals with defending champion Walter Payton and break into the top 10 or better at state.

Tony's Take: Payton will be one of the better teams throughout the classification and should battle for the CPS title and possibly a top 10 state finish. Word on the street is that the Grizzlies ran summer mileage together and that is key to success in cross country.