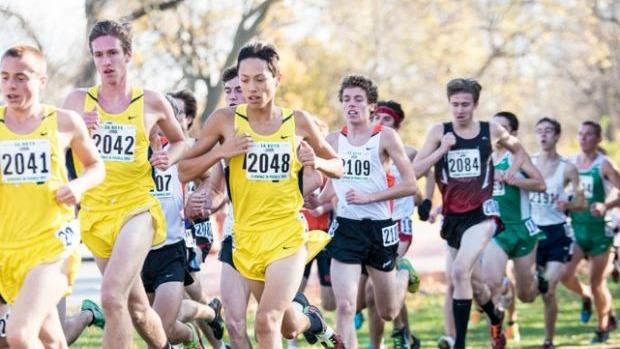 Ray's Take: It is exceedingly rare for a team to have five runners under 15:00 at Detweiller and has only happened a small handful of times in history... the 2016 Wildcats of Neuqua Valley enter the season with EIGHT runners who have been training ferociously and could dip under that mark at some point this season. For this year's preseason #1 team, a possible Achilles heel could be the lack of a strong front runner like Hinsdale Central, Zurich or Lions have... but when your pack can produce several runners capable of breaking 14:40 like Neuqua's does, that may not be an issue at all. Where to start?

Scott Anderson's 2015 season was an adventure, including a broken leg and a remarkable recovery. Coach Paul Vandersteen reports that Anderson, the team's leader, has been 'flanked' all summer by Jake McEneaney, Matt Milostan, and Jackson Jett. These four have already broken 15:00 and enjoyed strong track seasons in 2016 to signal that the upcoming cross country season could be special. The front varsity group has been completed by Ryan Kennedy, Josh Mollway, Danny Winek and sophomore Zachary Kinne, who should be improving consistently throughout his young career. "These eight are very close at this point, and it's very likely that their finishing order will change from meet to meet," says Vandersteen. "One of our greatest challenges will be to stay focused on team success through the small surges and regressions that typify a season."

There are so many names listed on this preview for Neuqua so illustrate the incredible depth of this team. Neuqua's JV team rarely will lose races this year, considering runners like Jeremy Hayhurst, Josh Patel, Tyler Bombacinoa and Alex Johnson have trained preparing to contribute a significant amount on the varsity level. The future could continue to be bright for the Wildcats as well, says Vandersteen. "Our sophomores are incredibly tight-knit and spent the summer improving their pack running through intervals and soccer games. Finally, we've been very impressed by the effort and mindset of freshman Rodrigo Alvarez. He's a special young man."

The 20th year of Neuqua Valley cross country could be an extremely special one, as Vandersteen notes in his website. The success of a program like this does not come out of thin air- Vandersteen is a hall-of-fame caliber coach who has taught the right mindset for his team year after year, and this is no different in 2016.

Coach Vandersteen speaks: "We had a lot of success last year-- we competed well in a particularly deep State race and were fortunate to qualify for Nationals. Our guys this year are competitive, and the temptation will be to set our goals based on the previous year's results. But the best thing we can do is to focus on the work, not the times and places. I know it's a cliche, but it's very important to the entire team-- from our frontrunners to our neophytes-- that we stress fidelity to our values and our process."

There is plenty to be excited about this cross country season, and the Neuqua Valley Wildcats are the #1 reason this preseason.

Ray's Take: Lyons is one of the two teams that enters 2016 with absolutely mind-blogging depth. The Lions showcase maybe the best 1-2 in the state with Vince Zona and Danny Kilrea. Zona (6th) and Kilrea (10th) put 2 in before anyone else's 2, including Sandburg's, and are the 4th and 6th returners in the state for this year. Coach Danner says the two have keyed off each other this summer and could both dip under even 14:20 on the right day. Those two are joined by an array of runners capable of running under 15:00. Alex Pall and Roland Van Tassel are both already within 15 seconds of that park and Graham Kutchek, who has made leaps and bounds of improvement this summer along with Andrew Tarasuk, is just 15 seconds behind those two. A 'newcomer' for the Lions is Dan Palmer, who did not run at state but was the Lions' fifth finisher at NXN and a huge reason the team qualified for nationals (where they finished 9th). Colin Costell has ran 9:50, Charles Harders and Tyler Morales provide even more depth (both sub 10:20 for 3200), and Patrick Kane fills out the top 12 with one of the best names in the state.

A showdown with Neuqua Valley very well may be imminent for Lyons Township, but there is a long way to go before November and the development of a congested but fast pack will reveal much more about what kind of success LT will be having this year. "Summer training was like the previous few summers," says Danner. "Big improvement from Costello, Tarasuk and Kutckek, along with several juniors. No additions or losses and schedule is the same. We have big goals for this season, mainly to improve from last season. They are motivated and we will continue to develop as a team." Remember: they finished second last year with a team average of 14:49. Not much higher to go... this team will be shooting for the state title in 2016.

Ray's Take: Along with Joe Newton's retirement, the season Lake Zurich could have may be the most compelling story in 3A this year. The Bears' top 3 is one of the most phenomenal top 3s in the country, and is composed of Matt Pereira, and Brian and Kyle Griffith. All three were all-state last year, all three had great summers, and all three... were pushed all summer by fourth runners, Patrick Burns, reports coach JB Hanson. "I can proudly say that Patrick will join that group as a frontrunner this season," says Hanson. "He has become THE training leader in our varsity, and has been pushing Brian, Matt and Kyle as much has they have pushed him. He is as fit and as tough as they come and this will likely be a breakout season for him." These prospects are enthralling and could give Zurich not just the best top 3 in the country but one of the best top 4s.

As everyone knows, no cross country race is won with only four runners. The need for a fifth is not lost on the Bears, who have trained this summer like they never have before. "We likely will set program records for most runners with 400+ miles logged (19-20) before all is said and done," counts Hanson. "Spirits are high as we move into the fall season." The fifth runner could be Kyle Fitzgerald, who has surged this summer, or Jacob Bieniek or Drake Heisterkamp, who have approached 10:00 for 3200. Eric Metzger has broken 15:50 and was last year's fifth runner-do not count him out as the possible piece to this puzzle.

The incredible teams that Lyons and Neuqua have prevent Lake Zurich from being ranked higher than #3 preseason. However, it appears as though Zurich could have more upside than any team in the state... and possibly the country. Keep two eyes fast on the Bears of 2016.

Coach Hanson's thoughts: "Our varsity is definitely an upper-class dominated team. We have very strong junior and senior classes filled with strong leaders and hard workers. Our varsity likely won't feature any freshmen or sophomores, something we haven't been able to say in a long time. The team is experienced, hungry, talented, and driven. Based on last fall's success and the key returners we have, this team will garner a lot of attention heading into the season. With most teams, I would worry about how they handle the pressure, but not with this team. This team is very grounded and realistic while staying quite ambitious.

"Needless to say, it's going to be a great year."

Ray's Take: Full disclosure note as an editor: It is absolutely remarkable to me that this team is only ranked 4th in 3A. If not for the incredible depth in the division this year, Hinsdale Central would have all the parts a team would want to be a lock for a trophy. The first part is a strong frontrunner: Blake Evertsen fills that need, the second returner in Illinois and a definite state championship contender. Evertsen has had the terrible privilege of running the shadow of Irwin Loud and Charlie Kern within his own conference-2016 marks Evertsen's best chance to establish himself as one of the most remarkable runners in Illinois history especially as the individual race winds up in November. The second part is an experienced and fast pack: Ethan Planson, Ryan Doorhy, and Sean O'Connell have consistently answered the call for the Red Devils are look to run low into the 15's. A bonus part is a relative wild card: Sam Fathizadeh, who PR'ed at Firth to the Finish, has the ability to run well under 15 minutes and could be a very capable #2 for the Devils, supporting Evertsen and possibly providing a crucial second all state medal for the Devils, very important when pursuing a team trophy.

Coach Jim Westphal has prepared his Red Devils very well to perform at the end of seasons in the recent future. Central hit a slight trough in 2015 with a 9th place finish and struggled with early peaking across the team. Do not be quick to forget, however, that Hinsdale Central won the state championship as underdogs in 2014 and champions do not make the same mistake twice. Westphal says the goals for the season are top 3 at conference at top 6 at state-both should be well within reach for Hinsdale Central's 2016 squad.

Ray's Take: The absence of Robby Prescott from the 2015 state team means that Downers Grove North returns all 7 of their state runners from last year! For this reason, the Trojans must have their sights much higher than their 17th place finish at state last year. Alec Danner has been their #1 runner for a couple years now and looks to close out his career improving on his 19th place from Detweiller last year. Danner will also be in competition with Danny Kilrea and Vince Zona (from Lyons) and Blake Evertsen (from Hinsdale Central) for an individual sectional championship. DGN's pack is a constant stream of runners from 15:20 back to 16:40-Jacob Ridderhoff finished 82nd, Ryan Birkmeier 122nd and Nick Chudzik 125th at state and all should be capable of running in the top 75 at Detweiller. Some of the pack may also include Andrew Marek, Sam McCool and Matt Moravec as well as a handful of incoming runners without PRs to compare but potential to compete for a varsity spot (Brad Rosen, Matt Shimetto and Thomas Diamond are some names to watch out for).

Coach John Sipple on the summer: "Summer training has gone decently well, but we have had a slow start to the summer with a few small injuries and a bunch of guys on school/family trips, but since August we have got everyone on board and rolling.  Which is good because the guys have some pretty high aspirations to be high in the standings in November."