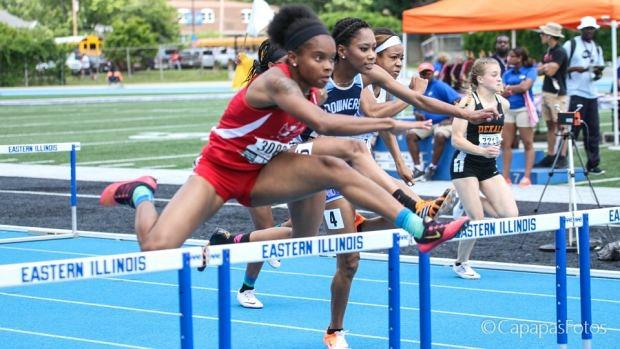 Larjarvia Brown (Sr., Alton) is much more than a great triple jumper as winning the state 100HH was a key highlight in her career.

The Illinois girls track and field landscape has been at a zenith level in terms of top notch enthusiasm, national rankings, viewership/notoriety/popularity, and competition for nearly 10 years. The sprints began to blossom and then explode around 2009 as a whole. The distance and field event areas followed shortly there after. The diminutive stature of Lajarvia Brown is far from being a short young lady. She excelled on the Alton basketball team for the past several years as the point guard before turning her attention to the track. We witnessed Ms. Brown's appearance on the national and international scene during the summer of 2015. She won several AAU and USATF titles and made a strong appearance in Columbia at the World Youth Championships. 2016 has been just as good if not better for Brown. She set the standard in the triple jump- her featured event. How does three state titles in a row sound? Congratulations to our female athlete of the year!