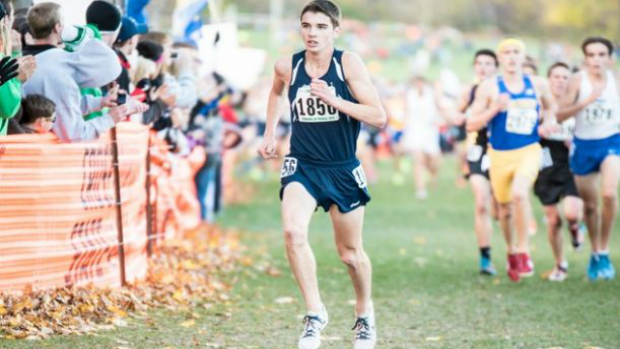 365 days is a long time to redeem one's self of something they knew they should have captured the first time...

The Orland Park (Sandburg) squad were the big favorites last year but finished in the wake of a crafty Hinsdale Central team that won their second title in a row. "We got out slow the first 400m and that killed us," said head coach John O'Malley during the aftermath. Maybe so. In the meantime of all those days, the Eagles occupied their time with a Nike Cross Nationals berth, 4x800m relay state championship, and a slew of top notched individual performances on the track.

But somehow something was missing.

The missing item in the Sandburg athletics trophy case was the coveted team state championship plaque. You see, before you can pass go and move on to big and better things as a distance running great you must CAPTURE THE STATE CHAMPIONSHIP.

"We got in 60 and then 2:08 for the first half-mile today... if [the guys] lost today it wasn't because they weren't bold." In other words, the Eagles who were led by senior Sean Torpy's third place finish (14:24), collected a total of three all-state athletes (S. Torpy, Max Lehnhardt, Chris Torpy) as well all five scorers under 15:00. The total of 79 points was more than enough to keep Lagrange (Lyons Township) at bay. The resurgent Lions ran extremely well in scoring 118 points. The Lions quietly went about their business in putting four runners under 15:00 with junior Vince Zona completing the journey in sixth place running 14:29.

Naperville (Neuqua Valley) and Elmhurst (York) were two teams factored in the trophy case throughout the season and even more so over the past three weeks leading up to state. But who knew it would come down to the sixth man? Neuqua Valley coach Paul Vandersteen was anxious as he looked through live results on his phone. "Well, I don't see all of York's guys in," implying the idiom 'don't count your chickens before they are hatched.' The IHSA does a video review of all finishers before officially announcing a winner. So the Wildcats were able to take the podium and the third place trophy ahead of York who scored the same 170 points as Neuqua Valley. The Wildcats did not have a single all-state runner, but they did produce a sweet 13-second scoring split.

As for the race itself the weather was noticeably cooler and windier for the start of the 3A portion. But the energy of the fans was still at a fever pitch and that seemed to drive the boys. There were about 26 runners within three seconds apart at the first mile with pre-meet favorites Kevin Salvano, Matt Pereira, Sean Torpy, Keagan Smith (Sr., Huntley) and several others hitting the first mile in 4:40. The back loop known as the "Bermuda Triangle" is where races are often won and lost. Salvano stayed with the front pack but in the lead. The 1 1/4 mile and 2.50 mile markers were negotiated in 5:53 and 7:03. Salvano held a small margin over Danny Kilrea (So., Lyons Twp.) and Blake Eversten (Jr., Hinsdale Central), but he was starting to inch away. Although the second mile wasn't super fast in terms of Detweiller premium racing, this race was going to produce a deep finish with tons of times under 15:00. Indeed it was off of just a 9:36 led Salvano run who cruised up the final home straight looking over his shoulders a few times insuring that he had the victory in hand.

Salvano portrayed a calm stoic demeanor afterwards that could virtually leave him to wonder through the crowd without anyone bothering him. "I've been dreaming of this moment since after my sophomore year," he said with a soft tone just after the awards ceremony. It took 14:45 to make the coveted all-state team. One of those 25 is York sophomore Charlie Kern Jr. Kern closed hard in motoring post Eversten, C. Torpy, and Pereira to take second. The last time a Duke soph finished second it was the legendary Donald Sage in 1997... Sage would go on to win the state title his senior year.