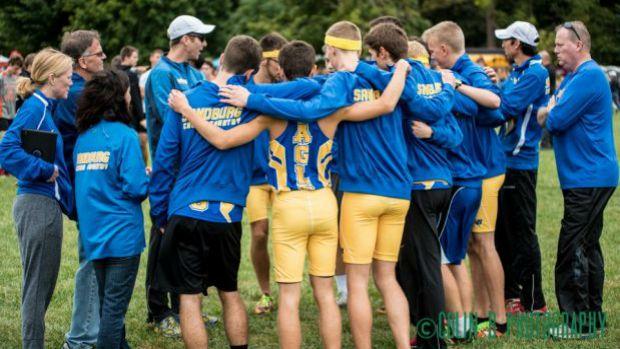 The #1 team in all of Illinois [Sandburg] imposed their will early and often during the hyped "Goliath vs. Goliath" battle at the famed Detweiller Park... in Peoria

The so-called battle "Goliath vs. Goliath" between top ranked Orland Park (Sandburg) and #2 Naperville (Neuqua Valley) was anything but that as Sandburg slayed the competition with 51 points. The highly scrutinized Eagles scoring pack was issued a challenge by their ultimate leader head coach John O'Malley. The challenge was for them to step up without one of their top runners senior Chris Torpy. Step up they did led by a furiously aggressive start ushered by twin senior Sean Torpy. Sean responded with a sizzling personal best 14:27 and a third place overall finish. The scoring split was even more impressive (32 seconds).

In the process, the Eagles may have found a future star in sophomore Dylan Jacobs. Jacobs ran well unlike an underclassman is supposed to in crossing the finish line in 14:36. O'Malley was happy afterwards. "We had to put some pressure on a few guys and they got the job done." The Eagles will have another opportunity to load their team before the state series late next month. It appears O'Malley will target Detweiller again at the Peoria Invitational on October 3.

Neuqua Valley did not run bad despite trailing Sandburg the entire race. In fact, the Wildcats ran well enough to place in any race except on Saturday. The final tally was a solid second in the scoring column: 81 points. Head Coach Paul Vandersteen appeared to be poised during the aftermath regarding his team's effort. "It's only September, we have a long way to go," he simply said.

The famed Dukes of York came into Peoria for their first invitational of the season. York had only participated in a dual meet and several intense workout sessions. The Dukes looked a bit stagnant to the naked eye compared to Sandburg and Neuqua Valley as the race was developing. But the truth of the matter was York was moving well during the second half of the race after going out a bit conservative. They will indeed improve over the course of the season. Sophomore Charlie Kern Jr. was running in the middle teens for a good portion of the race, but he was able to close things out and finish 9th. Overall the Dukes grabbed the third place trophy (155 pts.). "We ran OK today," said assistant coach Jim Hedman. "We beat the kids up pretty tough this week with hard workouts," he stated.

Mahomet-Seymour showed their bigger class brethren that their #1 status in the 2A division is not a joke. The Bulldogs ran well behind senior Alex Keeble who finished sixth overall in 14:36. The scoring five clocked under 1:00 that led to scoring a very respectable 181 points to take fourth. This will be a deadly combination during the state series.

The individual race turned into an instant classic the moment it was over. Jon Davis (Sr., Oakwood) was the favorite coming into the affair, he just had to prove it.

Davis and a fleet of others hit the first mile in approximately 4:39. The fast convoy included Torpy, Irwin Loud (Jr., Oak Park-River Forest), Connor Horn (Sr., Neuqua Valley), and Matt Pereira (Jr., Lake Zurich). The pace stayed true through two miles in 9:34 as Davis took on whoever was left in the battle. If you were alongside highway 29, you would have witnessed Davis and Loud running stride for stride.

Davis would say later that he wanted to wait until the final ½ mile to make his final move. It wasn't until the final quarter-mile that he was able to flee from Loud. Davis unleashed a devastating kick that brought him home in 14:10. Davis' goal coming was to run 14:10 and establish a meet record. It is safe to say that he collected on both goals. Loud finished runner-up in a personal best 14:20 followed by Torpy, Pereira, and Horn who closed out the top five running a personal best 14:31. 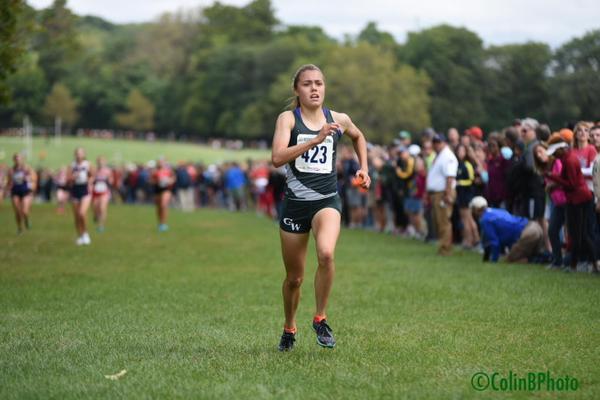 Payne put the "pain" on the competition in the final mile

#2 Glenbard West was all business in Peoria on Saturday. The Lady Hilltoppers put all five scorers in the top 30 in winning easily over #6 Wheaton-Warrenville South 95-176. Sophomore Lindsey Payne continued to keep her name among those vying for top individual honors later in the season. The team scoring split was 1:40 but that was very deceptive. The real tell all was the 2-5 scorers led by senior Kathryn Kenwood who placed 11th overall. It all ended 35 seconds later as senior Abigail Shaver crossed the line as the 30th place team scorer. These are the type of results that will make Glenbard West a Most Wanted team in November.

#23 Oswego placed a very surprising third on the strength of a 29 second scoring split that was not deceptive. The Panthers shocked #3 Palatine who was doomed with a 5th scorer that placed a whopping 105 team points! Unranked Maine South closed out the top five scoring teams with 256 points.

Payne laid back in the early going as St. Charles North sophomore Audrey Ernst took the pace out in 5:25 for the first mile. The climes at 9:40am was a little brisk but she was committed to a tortuous march against the field. Payne did not pick up the momentum until the second mile in 11:23. It was all but over for Ernst and a distant Maryjeanne Gilbert (Sr., Peoria Notre Dame) from that point forward. Payne pulled away from a close affair that ended up looking lopsided 16:34-16:52 over Gilbert. Ernst was third in 16:56.