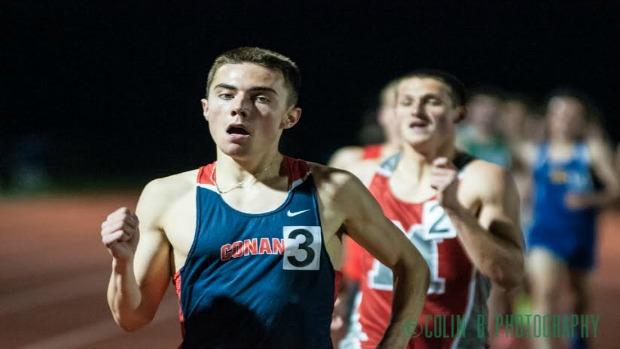 With the state championship less than 30 days away, the annual Prospect Wanner Invitational has always been the signature invite in which many of it participants pull out their Grade A relays and top individual event performers. There is perhaps no other meet in the state in which so much hype is bestowed on the competition at Prospect. Whether the grand daddy Friday night meet bears good weather or bad it is noted for wonderful performances across the board. The 47th annual affair was no different this time around as the Prospect HS played beautiful hosts. A sizable and knowledgeable crowd exuded energy that reminded one of Charleston. Charleston? Yeah that magical place where the best in the state will be converging at the end of this month.

The hyped up 1600 exceeds expectations-

More than a week ago Zach Dale (Sr., Hoffman Conant) so called jokingly barked about a desired opening pace that he wanted for the Prospect championship 1600m. "I don't know how many people will be able to go out in 2:04," he said alluding to the fact that he was planning on pushing the pace to the max. Meet announcer Bill Treech was hyping the main event during the penultimate race as to add extra incentive to any bold young men who dared to go out with Dale.

The race got out as expected with Dale opening up and ripping a fast 100m and then min 26-seconds. He settled down momentarily as Bryce Richards (Sr., Mundelein) joined him at the hip at 250m. Heath Warren (Jr., Springfield) was surprisingly there as well. The first 400m was negotiated in 60.4 courtesy of Richards- Dale was there as well. The rest of the field was less than two seconds off the pace.

Richards aggressively moved in front and pushed the backstretch perhaps to Dale's liking. It was clear this was going to be a fast affair. As Richards continued his assault, Warren and Connor Madell (Sr., Lyons Twp.) were desperately trying to hold on to the scorching pace that hit the halfway toll in 2:04.4. It is not known if Dale was irritated by the pace being pushed by someone other than himself because he turned up the heat to near max entering the all important third circuit. He was clearly in control despite Richards and Warren hanging around. The rest of the litter was spread out all over the place but looking solid.

Dale passed the 1200m in 3:07.6 and just about in the clear. He reached for another gear with 300m to go and it was all but over for his opponents. There was no way he was going to lose this race. The only calculation was how fast the winning time would be. If Dale wouldn't falter the meet record was going to be destroyed. As it were Dale continued his strong surge and won easily in 4:09.72- good for a state best and US#2 for the distance. Warren finished well in a lifetime best 4:12.31. A very surprising Jared Christensen (Sr., Rockton Hononegah) sprinted like a mad man over the final straight to snag third place away from Matt Plowman (Sr., Elmhurst York) 4:13.41-4:13.51. Richards faded to a very good 4:13.66 The rest of the supreme class followed with Pavlo Hutsalyuk (Sr., Chicago Lane Tech) 4:14.81, Madell 4:14.88; Dan Santino (Jr., Chicago St. Ignatius) blazed a super time 4:16.75 but "only" finished in 8th place. In all there were 10 runners that broke 4:20. This was the deepest and fastest "mile" field of the season, including the dandy over in the south suburbs at Sandburg High School. 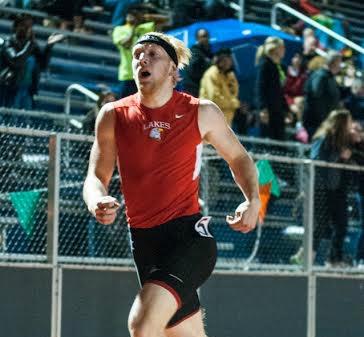 Split decision in the sprints-

Depending on which team camp you were in (Schaumburg, Lakes, York), the most outstanding speedster was a pick 'em. Shandall Thomas (Sr., Schaumburg) was the first to strike gold first with a victory in the 100m (10.80). Thomas anchored his team in a crowd pleasing 4x200 relay that produced a season best 1:29.59.

Alex Teague (Sr., York) performed his best for his beloved Dukes by winning the 200m in 21.66. There was not a wind gauge present but everyone in the stadium would pledge that there was not one ounce of wind present. Previously he anchored his team to a second place finish in the 4x2 (1:29.96). 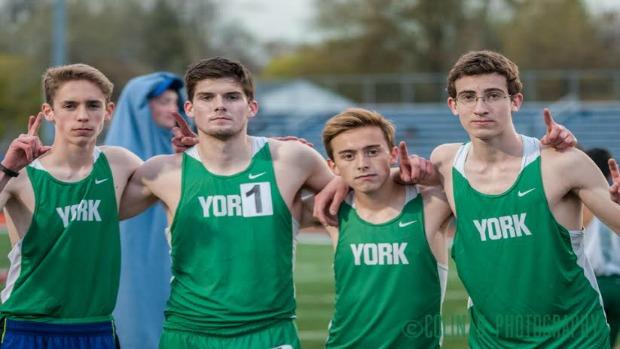 The 4x800 was billed as the opening act rather than the main bill this year mainly because a few teams entries were uncertain. Lyons Twp. for example did not load their "A" squad. Prospect had been ordinary, Lane Tech had a few question marks and York has been off the radar for several years. The Dukes would change all of that in a hurry with the emergence of super freshman Charlie Kern Jr. and Matt Plowman. Kern led off with a strong 1:55.4 leg that over came Prospect and Whitney Young just short of the first exchange. Max Denning kept the heat on Prospect like a second leg is supposed to and the result was a recipe for success. Nathan Dale's only job was to bridge himself to anchor and leader Plowman. He pulled away from Prospect late on the second lap and it was all over for the host Knights. Plowman took matters in his own hands with a strong opening 300m but putting things on cruise control and the competition on ice. The final time was a new state best 7:45.60 and US#6 clocking. The splits: 1:55.4, 1:57.6, 1:57.2, 1:55.2.... Prospect ran one of their best efforts in several years with a fleeting 7:48.94 (IL#2). Hersey ran a season best 7:55.18. Lane Tech checked in the 4th position on the strength of Pavlo Hutsalyuk's 1:54.3 leg to catch Whitney Young 7:58.41-7:58.58.

Big boy 100: You had to weigh at least 200lbs in order to be included in this race. Dylan Draka (Jr., Wheeling) ran a fleeting 11.05. Most of the time the meet announcer pokes fun at oversized throwers who try to fulfill their fantasies of being a sprinter. But in Draka's case he ran a time that is legitimate. Had the lad been in the regular Century final he would have placed fourth.

800: Alex Lima (Sr., Lyons Twp.) took a break from his usual relay anchoring duties to run his favorite event fresh. The anticipated battle between he and Torrain Haughton (Jr., Maine West) did not materialize. Lima controlled the race throughout and held strong against a late charging Thomas Mosley (So., Zion-Benton) who passed a tiring Haughton to run 1:55.49.

Chicago Whitney Young freshman Clayton Mendez continues to mature and grow into a sport that originally was on the back burner. Mendez shunned several other college prep schools to attend the basketball talent rich Dolphins. Mendez quickly learned that sitting the bench was not the way to stardom. After a successful cross country season that netted a trip to state, Mendez went to work and is now becoming one of the top underclassmen distance runners in the state. In the 3200m, Mendez showed tremendous poise over the final two laps and fought off fatigued to win in 9:26.37. Mendez sprinted the final 70 meters to catch several runners and nipped the dejected Hersey senior Josh Phliske (9:26.51).

Lakes sophomore Cameron Ruiz improved by over a half-foot on his long jump personal best to leap a IL #3 23-1.75. If Ruiz can remain consistent from here on out he will be a very legitimate candidate as a state champion contender.

The state's second ranked discus thrower Ryan Mullin (Sr., Lakes) was more than 20 feet behind his season and personal best, but he still won by 13 feet with a 163-3 winning toss.