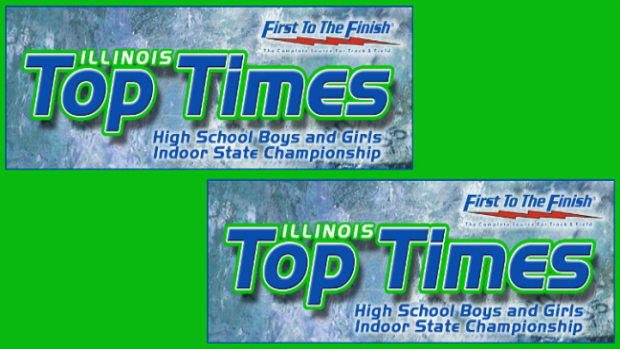 The frigid climes have cancelled several weekend meets in the greater Chicagoland area and kept the most hearty track and field faithful track fiends in hibernation. For those who choose to trek to Bloomington and compete inside the Illinois Wesleyan University Shirk Field House it is a good choice for sure. It is worth every bit the trip to see some wonderful track and field action.

Jamante Steward (Sr., Hillside Proviso West) placed 4th in the state high jump competition a year ago if you recall. Although the lad leaped to a lifetime best of 6'8" he was not happy. He always knew he was capable of hitting such a lofty mark. "I'm not really happy with my performance today," he said without a smile. "Next year when I come back I want to jump 7-feet." Steward has finally gotten himself together mentally and physically in that he has taken his training more serious than ever. At the Proviso West 50th Annual Invitational, Steward attacked the deep competition by getting over 6'8" and then reached a new personal best of 6'10" on his second attempt. During the excitement there was a large crowd hovering around the pit and jump area similar to being at a music concert. The bar was then raised to 7'0" which added to the suspense and nerves to all of those watching- and of course to the competitor. Steward took three good swipes at the new frontier but came up short. There is no doubt that he will reach his goal this season, so why can't it be at Top Times this weekend?

Central Illinois has been a factory of great pole vault talent for years now. A lot of that has to do with Mike Cockerham and the Flying Dragons Pole Vault Club. Ryan Ashenbremer (So., Normal West) is one such prodigy that has moved from a 14-foot vaulter to a state leading 16-5 and ranked #10 in the country. He along with Andy Jatis (Sr., New Lenox Providence Catholic) will duel once more before the outdoor season. Jatis up-ended Ashenbremer at the Windy City Pole Vault Summit earlier this month.

Dylan Scheirich (Jr., Roselle Lake Park) is the 3A leader and #2 in the state overall with a 57-10 personal best. He will have some pretty stiff competition awaiting in Kyle Hedge (Sr., Crystal Lake South), Ricky Hurley (Sr., Cary-Grove), Ricky Nelson (Sr., Belleville West), and several other throwers who heaved past the 55-foot mark. The throws crazy Lake Park program will have four competitors who hit on 53-feet or better.

The top triple jumper in the field is the surprise JaShaun Steward (Jr., Hillside Proviso West). Steward, who is the younger brother of HJ star Jamante Steward, has leaped 47-1 in his first year of triple jumping. His coach Johnny Jenkins has done a masterful job in working on his technique and building Steward's self-confidence.

The sprints may surprise-

The big surprise going into the season was double state champion Kahmari Montgomery (Sr., Plainfield Central) putting more emphasis in the 60m than his treasured 400m in which he was dominant in last year. Montgomery said that he did not like running the 400 because of the tightness of the track in many venues. He contested the 200 in a least amount fashion. He will save that event in which he was also the state champion for outdoors. Shandall Thomas (Sr., Schaumburg), Marcus Jones (Sr., Chicago Brother Rice), and Cary Lockhart (So., Bloomington) are key figures.

There is no Neuqua Valley's Ty Moss or Zac Espinosa... no problem. This field featuring new names to the scene such as Steve Strange (Sr., Oswego), Chris Thompson (Jr., Lemont), and Corey Hertz (Lakes) is ready to impress. They all have run 50.34 to 50.39- so you see it is a close match for the championship section. Strange was the state leader until Moss ran 49.96 at his conference meet. Thompson ran 50.34 on a 160m track. When you add in 48-second talent Carl Klamm (Sr., Evanston) we should see a sub-50 effort from the winner.

Eric Walker (Sr., Chicago St. Rita) could be the comeback athlete of the year after what he went through a year ago in the hurdles. He dealt with some injuries that disable his status as the "Clout Man." Now he is the co-leader in the 60HH at 8.04. Timmy Brundidge (Fox Lake Grant) is the man who could threaten Walker.

The distance events will have to be a collective effort-

Luke Hoffert and Jake Hoffert (senior Yorkville twins) will compete in different races this weekend. Luke is the favorite in the 3200m with a seed time of 9:28.54. Peter Johnsrud (Sr., Oswego) the road warrior makes his third trip to central Illinois. Joe Suarez (Sr., Plainfield East) and Dustin Macuiba (Jr., Gurnee Warren Twp.) are key race figures. The 1600m will IL#3 Keegan Smith (Jr., Huntley) who ran 4:17.47 this year. Jake's season best is 4:19.83. Brady Bobbitt (Sr., Aurora Marmion Academy) will look to improve on his 6th place finish from a year ago.

There are six runners seeded under 2:00 in the 800m. Konrad Eiring (Sr., Barrington) is the top ranked runner in the field followed by Heath Warren (Jr., Springfield). Carl Klamm (Sr., Evanston) ran 1:53 two years as a sophomore but hasn't been the same ever since. Maybe he will emerge victorious in this one.

Relays appear to work in progress-

Brittny Ellis is the best choice for girls sprints-

Ms. Brittny Ellis (Sr., Warren) has been coming to the Top Times meets since she was a freshman. But she has never starred in the meet. This is her chance now to do that. She will be the big favorite in all three sprints: 60, 200, 400. Jessica Watkins (Bolingbrook) is seeded #2 in the meet and one of the very best in the state for the short stuff. The 400 will see no comp but emerging talent Kierra Griggs (Bloom Twp.) could be auditioning for her time down the road. The 200 is all Ellis' but Angel Broughton of Homewood-Flossmoor could steal the show somehow like she did last year... the 60m hurdles will see Jayla Stewart of Homewood-Flossmoor dominate if her hammy is fine. She pulled up last weekend at her conference meet.

Watch Lindsay Graham in the distance-

Lindsay Graham (Jr., Glenbard West) had a great cross country season which resulted in a dominating performance for three-miles. Two months later she is doing the same thing. Graham is currently the state leader in the 3200 (10:30.85) and 1600 (4:55.19). She will have a bit of competition for a while in the first race as four of the state's top fifteen girls are entered. Rachael Lau (Jr., Plainfield North), Abby Kargol (Sr., Downers South), Hannah Ewald (So., St. Charles East), and Emily Hamilton (Sr., Naperville North) are expected to run well. The 1600 will feature 800 specialist Lauren Van Vlierbergen (Sr., Jacobs). LVV can run any distance and this one race could be hers to win it. It should be a great affair since she is not racing her dominant one... Michaela Hackbarth (Jr., Downers South may not be as fresh as some of the other competitors because of doubling back duties but she still should come out the winner. Skyler Bollinger (Jr., Yorkville) and Emma Moravec (Downers North) are key targets.

Brooke Catherine is the best in the field-

Watch the one and only Brooke Catherine (Sr., Normal Community) in the pole vault. Catherine has a season best of 13-4. She is an elite vaulter who is going to go for the ultimate all-time meet record of 13-3 by Sarah Bell of Bloomington Central Catholic.

Allison Chmelik (St. Charles E) is the top seed in the triple jump at 38-3.5. Hannah Schilb (St. Charles N) is second and will fight Chmelik again on Saturday for the big title.

The entire field of the 4x8 is ranked in the top 15. Look for Loyola Academy to upstage Downers North again. They won in the last stages of the DGS Relays in early March and is the state leader at 9:25.02... Homewood-Flossmoor will get one last chance to prove they are for real in the 4x2.... St. Charles East is back as the top seed in the showstopper.