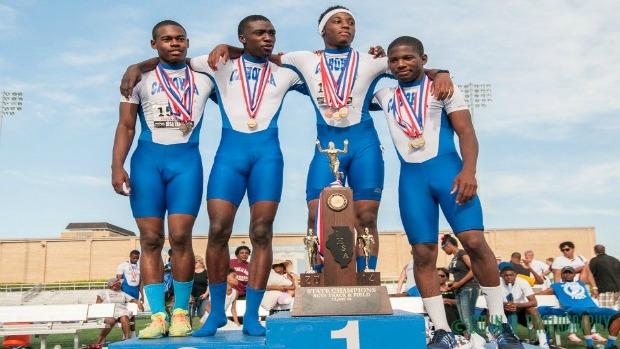 Standing on top of the podium has become a familiar scene for Cahokia in recent years (C. Boyle photo)

Saturday morning will open the second section of three at the Illinois Top Times inside the vivacious Illinois Wesleyan University's Shirk Field House. The fields are pretty stout for the boys and girls teams and it will be rocking to say the least.

Cahokia megastar junior Ja'mari Ward will be the headline for the boys. Actually the entire Cahokia army will be in full force in every major category that will field an individual or relay. The Comanches are loaded.

For the girls, it will be a battle between cross county All-American junior Maryjeanne Gilbert from Peoria (Notre Dame) and junior Karina Liz who hails from Aurora Central Catholic. They will contest the 3200m and 800m respectively. 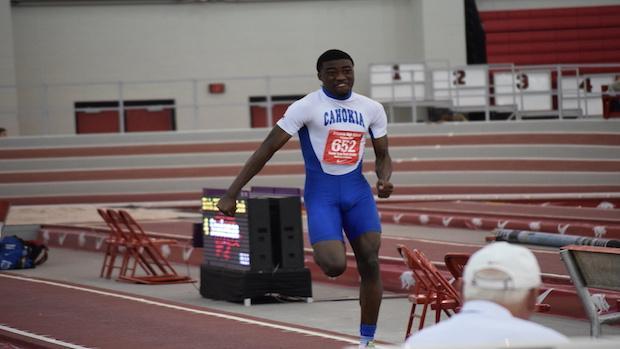 It is scary to think that Ja'mari Ward is just a junior in high school. That means he will another year after this one to wreck terror on anyone that stands in his way. Even scarier than his athletic exploits is his unselfishness and humbleness. Not one time has there been an opponent or an opposing coach said that he is cocky or full of himself. "My job is to go and do my best," Ward has simply uttered when pried why he is so good. The nation's #1 jumper has mind blogging marks of 25-7.25 for the long jump and 51-7.75 for the triple jump. Both of these of these Superman efforts are in the all-time top 10 for indoors. If Ward decides that he wants to break the meet records 50-2.75 and 24-4.25 he will do that. Ward will also assist his teammates in one or two relays as the leadoff for the 4x200m and 4x400m. Cahokia will be the favorites there as well.

Let's stay with the field events-

The long and triple jumps were highlighted by Ja'mari Ward but there are other areas that deserve attention.

Anthony McRoberts (Jr., Cahokia) has come into his own this season in the high jump with a lifetime best of 6-8. He has consistently cleared 6-5 and higher in the majority of his contests. The field itself is pretty solid with Noah Agnew (Jr., Vernon Hills), Darryl Sullivan (Jr., Marion), Will Daniels (Jr., Geneseo), Seande Vinson (Jr., Cahokia) and Matthew Martinson (Sr., Marion Catholic). All of these athletes have eclipsed 6-6 or better.

Sam Sikon (So., Carbondale)indicated last weekend at the Gene Armer Invitational that he was shooting for this meet to achieve his indoor peak. Sikon currently is the only thrower in the state with a 60-foot mark. Sikon believes that he can reach 63-feet this season. The question is can he get close to that mark in competition.

Joe Bevilacqua (Sr., Bloomington Central Catholic) was a pre-season favorite as one to watch in the pole vault. So far the insight has looked true. Bevilacqua is the top seed at 15-0 and more than four inches better than his competitors.

Inside the distance arena we go-

Salvatore Flight (Sr., Oak Park Fenwick) has enjoyed a great indoor season to date with 4:20 and 9:34 times on his resume. In the 1600m, Flight beat a good field at his conference meet. We will see if he can duplicate that one more time. Several runners under 4:27 led by Mitch Feehan (Jr. Lincoln-Way West). Feehan's best was 4:32 from last year.

Feehan's teammate and sophomore Evan Mitchell has had an equally great season to date when it comes to the 3200m. Mitchell is the top seed in the 3200m having run 9:33.87 and finishing second behind Sean Torpy of Sandburg. The confidence in that race should pay off big in his biggest meet of the season. Watch out for the Chicago Public League's Walmer Saavedra of Lindblom. Saavedra earned his first all-state honors in cross country last fall and he is much better than his seed time of 9:48.66 indicates.

The sprints will be hot-

The REAL deal will come out for sure as several of the state's very best sprinters this indoor season collide. Not much fanfare has been given to Josh Eiker (Jr., Galesburg) because of the level of competition that he has competed in. But the numbers don't lie for a kid who leads the state in the 200m with a sizzling 21.81. Although he ran out of gas in last year's state final he was highly regarded as the state's second in the event behind Kahmari Montgomery of Plainfield Central. And his invitation to last summer's junior national meet in Oregon was no fluke.

Cahokia will have three entries in the 400m led by junior Tyran Lyons who has clocked 50.45. Lyons and his teammates Chris Stanley and Chris McGee will have a heavy workload on Saturday. So if they are tired by the time they are up for this event, it could be Sam Blankenship (Johnsburg) stealing the show.

Korrion Session (Sr., Cahokia) has to be the heavy favorite here with the 8.10 clocking that he has put up. Session is battle tested after going against the state's best all season long.

The 60m should be the hottest item on the plate with IL#1 Johnathan Stokes (Sr., Chicago North Lawndale) going at it with Josh Eiker, Dion Hooker (Sr., Sycamore), and Adam Nelson (Jr., Triad). Stokes edged Nelson last weekend in Champaign to grab the top spot. The rematch will be fun to watch. Eiker is good here too. He made his name last year in this event.

Who is going to stop Cahokia in the relays?-

No matter where you turn the corner Cahokia is there to greet you with danger. The Comanches are the top ranked team in all three relays by a country mile. The first race of the day will be the 4x800 and Comanches will get it started with Tyran Lyons. Lyons loves to run this race despite being a long sprinter. He will put pressure on the opposition with a fast start. The 8:07.98 is 15 seconds better than Rockford Christian. The Comanches will have give special attention to this race after a lap counting error denied them a victory and a school record; Galesburg and Cahokia come in with fast marks but it will come down to the anchor and clean stick play. Galesburg has Josh Eiker the fastest man around. Cahokia is collectively a force that once they get a lead they will be hard to beat; the showstopper will be all Cahokia. Let's all hope they have energy to run a fast time for the fans. 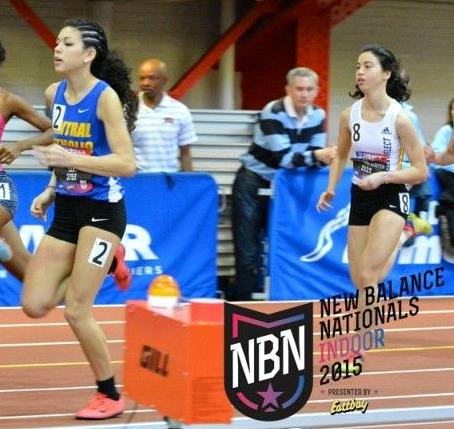 Maryjeanne Gilbert and Karina Liz will highlight the distance events-

The first distance running event of the day will be the 3200m and Maryjeanne Gilbert will be the center of attention. Gilbert has not run very many indoor races over her high school career, but that does not mean she is capable of putting up a great performance. In her lone performance of the season she ran 10:49.73 to rack up the #2 time in the state. We could possibly see a duplicate effort or slightly better heading into the outdoor season. Kitty Allen (Sr., Marengo), Vivian Overbeck (Jr., Vernon Hills), and Abby Jockisch (Sr., Dunlap) are viable candidates for top five spots.

Karina Liz made a big splash in her career when she went to New York for the New Balance Indoor Nationals in mid-March. In the second of three championship sections, Liz made a decisive move over the final 200m to secure the victory and post the fastest time for an Illinois school girl in 2:11.70. The all-time Top Times record is 2:11.80 by Lauren Van Vlierbergen of Jacobs set last year. That time could fall if Liz could some how get a fast pace for the first 200 or so meters. That will be hard to come by with the leading competitor listed at nearly 13 seconds back.

Madison Ronzone (Jr., Aurora Rosary) made a huge leap over the past year to emerge as one of the best distance runners in 2A. She comes off of a solid cross country season in which she placed 17th. The indoor track season has continued to turn produce favorable dividends as 5:09.60 proves. Perhaps Ronzone can cap the undercover season with another personal best and a victory.

New faces emerge in the sprints-

Dominique Lewis (Sr., Champaign Centennial) is the co-leader in the state at 7.67. Lewis has always been a solid sprinter and contributor in relays. She has a 100m best of 12.06 and anchored a few all-state relays in the past. But it appears as though she is emerging as an overall top choice to watch. At the Gene Armer Invite last weekend, Lewis dominated the 60m with a good block start followed by an explosive acceleration from the 40m through the finish line. Anna Sloan (Sr.,River Forest Trinity) and Tyjuana Eason (Sr., Kankakee) are two other solid candidates to watch for in this race. It will be Lewis, Sloan, and Eason back in the 200 several hours later. The money on the winner of the one-lapper will be a little more competitive as all three have similar season bests in the mid 25s. Tina Martin from Decatur Eisenhower should be thrown in the mix as well.

If you recall last year at this time, it was Briyahna DeRosiers starring for Chicago North Lawndale in the 200 and 400 dashes. She would go on to have one of the most memorable seasons by an Illinois girl in years. Now her younger sister Gabriell DeRosiers (Jr.) has emerged from the shadow in what seems like overnight to become one of the surprises this indoor season. The younger DesRosiers has the second fastest seed mark and will be fighting fellow emerging speedster and transfer from Simeon HS in Whitney Ward (Sr., Brooks) for supremacy. We could be possibly watching the preview for the Public League crown down the road.

Chante Stonewall (Jr., Normal U-High) won the 60HH last year in a surprise. She is back to defend her title but will have some company with list leader newcomer Imani Carothers (Fr., Chicago Brooks).

Relays are in there too-

We must be honest here about the relay fields. The times across the board are not impressive at all. But this is the championship and the times should form into respect at the end of the day. Mahomet-Seymour leads the 4x800 entrants with a 9:59.64. Montini Catholic is a tick behind at 10:00.04; Kaneland has the #1 mark in the 4x200 at 1:45.90. Can the Knights hold off sprint powers Kankakee and Springfield Southeast? And finally the 4x400 will feature Springfield Southeast will be the heavy favorite.

Fields events are the anchor-

Jaimie Robinson (So., Chicago DeLaSalle) is one of the top triple jumpers in the state ranked #4 in all of Illinois. Keep in mind that Robinson comes from a strong lineage in that her father is the Purdue University legend and NBA star Glenn "Big Dog" Robinson. Still, an athlete has to make her own way and Robinson has done that she placed second at state and is the defending champion here. But there is something missing here. There are some out there who feel she should be pushing 38s and 39s given the resources that she has. We will see if Robinson can elevate her game this weekend.

Cassidy Osborne-Butle (So., Mt. Zion) is a new face and name on the scene. She has tossed the shot put a solid 45-3.

Kassadee Ifft (Jr., Prairie Central) is on the verge again of dominating this event in the classification.

Finally, there is the new face and potential star in the high jump Jamari Drake (Jr., Springfield Southeast). She has cleared a state best 5-8. Gillian Urycki (Jr., Metamora) is a name to watch here.