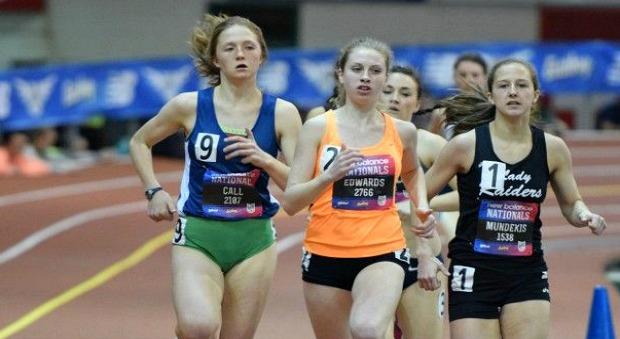 By the time Friday evening is over things inside the Illinois Wesleyan University Shirk Field House will have felt like a true championship. Nearly every event is featured by a top athlete... and that is what the Illinois Top Times Indoor Championship is supposed to represent.

There are several parallels regarding the former great Stephanie Brown from Downs Tri-Valley and University of Arkansas and Cassie Mundekis (Sr., Midwest Central. Both runners are from very small schools with no one that has opposed them on the track. Both are multiple state champions. Both have gone on to make a name outside of their comfort zone. And both are well liked among their peers. Those are the parallels. Mundekis is having an amazing indoor season in the 800m. Mundekis, who recently committed to the West Point Academy, is ranked #2 in all of Illinois and #12 in the United States of America yet she is stuck in quicksand. To no fault of her own she wants to run in the best possible race. Her 2:12.01 is nearly 10 seconds better than Hannah Stone of Tolono Unity. The fact is only 2A star Karina Liz (Jr., Aurora Central Catholic) is good enough to challenge her. Brown was the best runner in Illinois during her senior year of high school (2009). If you case you somehow forgot, Brown roasted the track let alone the competition with a 2:07.81. It is the general belief had she not ran the 4x8 and anchored in 2:06, she might be the all-time state record holder. So in other words competing in a small classification don't mean squat at the end of the day when you are a great athlete. Mundekis will go out and race hard as she always has and hopefully the outcome will be a new class record.

Maria Brauer (Jr., Petersburg-Porta) could be wearing the gold medal if her seed time which is 15-seconds better than her sister Adrienne hold up. Maria has run 11:15.07 compared to 11:30.56 for Adrienne. But keep in mind that they ran their marks in different races. Twins seem to have this extraterrestrial ability to stick together in races- especially distance races. Ericka Hibser (Sr., Lewistown) has to be considered a threat to break up the sisterhood. Hibser sits as the #3 seed with a season best of 11:30.94. Hibser is a recent two-time all-state runner in both cross country and outdoor track and field.

Anna Sophia Keller (So., Effingham St. Anthony) will make her Top Times debut after much debate on continuing her indoor season after putting away the 3200m field at the Gene Armer Invitational last weekend. Keller indicated that her training had been slowed a nagging sore hip that has lasted the last two months since the end of the cross country season. "My left hip was a problem for about two months so that got in the way of training; it's getting better, but I still need to be careful so that it does not come back." Keller is entered in one event (1600m) and she should be a heavy favorite sore hip or not over a solid field that features Annemarie Michael (So., Urbana U-High), Daly Galloway (So., Dwight Coop), and the Brauer twins Adrienne and Maria. Keller has clocked 5:02.80 in her lone effort of the season.

Cassie Mundekis is technically a sprinter when you consider she will be doubling back from the 800m to challenge a true speedster in Amanda McClain (Sr., Sullivan) in the 400m. It will be interesting to see how much Mundekis has in her tank after running the grueling four-lapper. McClain, the Illinois State University commit, has the IL#6 mark at 58.69 and is the reigning outdoor state title holder. There is no other way to go for McClain.

McClain will be the top seed in the 200m but her 26.23 mark is not convincing enough to say that she is heads and shoulders above the competition that features triple jump ace Nichyria Byrd (Sr., Chicago Ogden International). Byrd is quickly moving from an unknown to someone of interest in this sport. The 200m and all other events have to be classified as emerging products. Jenny Kimbro (Jr., Jamaica) is the heavy favorite in the 60HH. Kimbro won the 2014 100/300H state championships. She is currently ranked #4 in the state. 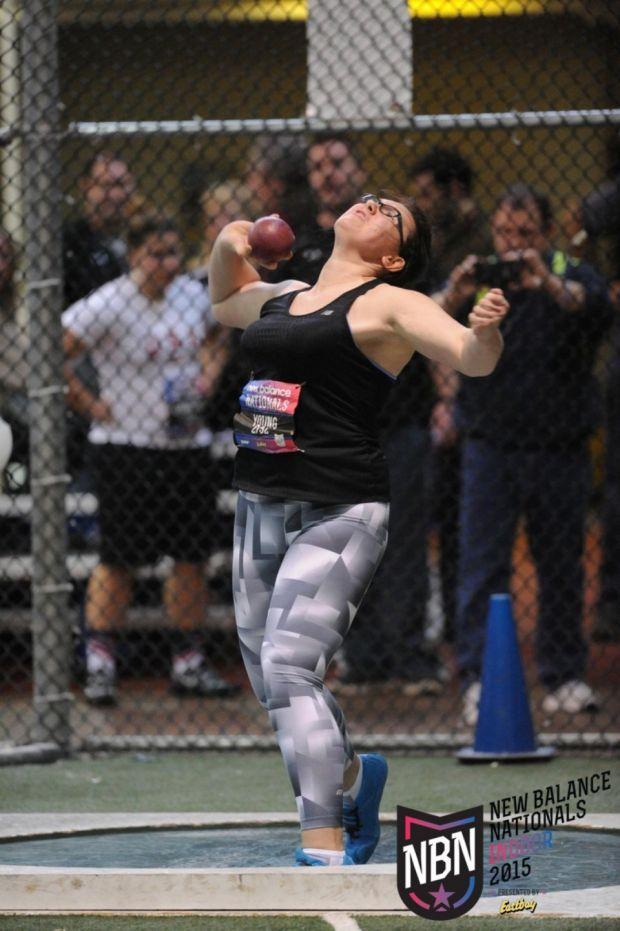 We mentioned Byrd earlier in the triple jump. Well she happens to be the best triple jumper that no one has heard of. Byrd won the state title but no one knew that. She copped 7th in the USATF Junior Olympics last summer. No one knew that. Her coaches worked diligently this winter in trying to get her in a few upstanding meets but no one knew who she was. So hopefully after this weekend we all will know who Nicky Byrd is. By the way she is on pace to break both the long and triple jump meet records which happen to be in line with her season bests 18-3.75 and 37-8.5.

K.D. Young (So., Warrensburg-Latham) is in a class by herself when it comes to the shot put. She has been in pressure situations all indoor season long including a 4th place finish at the New Balance Indoor Nationals that netted All-American honors. Young has hit on 48s throughout the season and her personal best 48-6.75 is dangerously close to the all-time best set last year by former Highland ace Lena Giger who reached the magical 50-foot barrier. Young certainly has the ability to reach the Top Times record 47-2 but several attempts at 50-feet would be nice.

Morgan Zacharias (Sr., Reed-Custer) is just a tick behind Brooke Catherine (Sr., Normal Community) who has leaped 13-4. Zacharias has hit on 13-3 and by the time Saturday afternoon hits for Catherine, she could be looking up at a new state best.

Relay times should wake everyone up-

The 4x8 will be first up to break through with a sub- 10:00 mark. Urbana U-High has two sub 2:20 legs in sophomore Annemarie Michael and freshman Arielle Summit. They should be able to crush the season best 10:05.31. Carthage Illini West has the top seed in the 4x2 at 1:50.29. They will be challenged by Erie-Prophetstown, Luther North of Chicago, and Henry-Senachwhine. Finally, the 4x4 should be a solid race with last year's outdoor champion Williamsville back. They will square off against Central A & M, Newton, Reed-Custer, and Deer Creek. 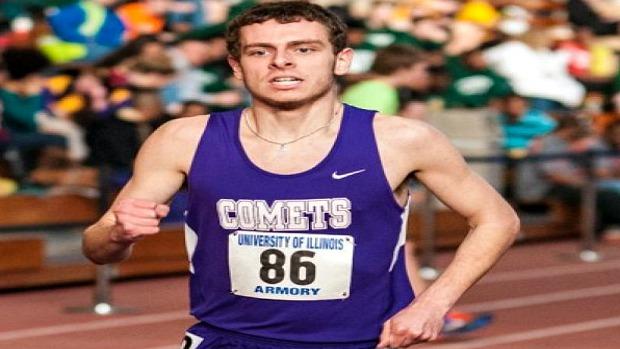 Jon Davis is the one to watch in the distance program-

The lack of an everyday training partner up to his speed coupled by awful running weather has not deterred Jon Davis (Jr., Oakwood) into becoming a monster on the track. He ran a swift 4:16.77 1600m earlier this month at U of I. Davis has been driven by the will to be the best. He may have to use a few lapped runners in going after the meet record 4:19.52 by Jason Bill. Davis will definitely be going for the meet record come Friday evening.

Andrew Warnes (Jr., Tolono Unity) is the top seed in the 800m at 1:58.66 and nearly five seconds better than Nick Porter (Jr., Paxton-Buckley-Loda). The overall times should drop significantly from top to bottom and maybe another runner or two will be able to break 2:00.

The seed marks for the 3200m are less than stellar with no one running faster than 10:00. But that should change with Eric Ponder (Sr., Tuscola) running. He is a feisty competitor who likes an honest but aggressive pace. He will have to take over the lap counting duties if the time is expected to get into the 9:30s or 9:40s. This race should be a fun one to watch. 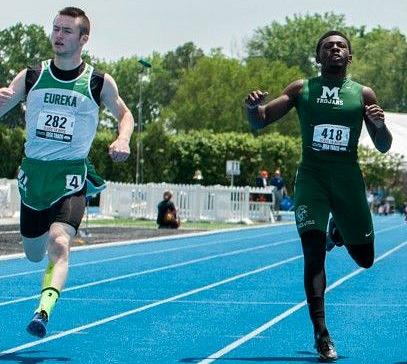 Brett Charlton (left) and Andre McGill will attempt to show off on the track (C. Boyle photo)

Could it be the Brett Charlton show?-

Brett Charlton (Sr., Eureka) has shown a lot of swag in his individual and team performances over the past several years that has led to big wins on the big stage. But last weekend at the Gene Armer Invite at the University of Illinois he looked mortal in the 60m. He later dropped out of the 200m because he said he wasn't feeling well. The fields in those two races were awesome and most top notched athletes would have to be carted off by paramedics in order to not compete. He will get one last opportunity in the 60 and 200 dashes. In the short variety, Andre McGill (Sr., Madison) will be standing in the way as the top seed clocking 6.95. McGill may come from a very small school but he battled tested because of his proximity to the St. Louis metro area. That means he competes against Cahokia, E. St. Louis, Edwardsville, and more weekend and week out. Try starving a pit bull when it's dinner time. That's what it is going to feel like in the 60 and 200.

A newcomer to the scene named Aaron Harris (Jr., Lisle) is in the 200 as well. He has dipped under 23 (22.66) this season. His affirmation to the track and field scene should be in part attributed to the great coach Thomas Boatright He is also the favorite in the 400. Josh Kirby (Sr., Peoria Christian) and Aaron Luesse (Sr., Tolono Unity) are the favorites in the 60HH should they collide in the finals.

Field events need a look too-

Charlton is entered in the long jump and has the top mark at 21-11.75. Marcus Sitko (Staunton) is seeded just one inch behind and will tough as nails. Several other quality jumpers have 21-foot plus marks such as Bryan Heath (Sr., Taylor Rockridge), and Philip Fox (Sr., Peoria Christian). Corey Kersey (Sr., Neoga) has emerged from the slumber and competed last weekend to get a qualifying mark in the triple jump. Kersey was one of the top leapers in all of Illinois last season. His 44-11 mark right now might not sound impressive, but it is if you consider he has only had one competition under his belt.

The times of course will drop in the relays starting with the 4x8. Unity (Tolono) is the top seed at 8:22.05. Shelbyville will challenge them of course but several other teams will fight to get a top 6 medal.

Fulton will duel Unity (Tolono) in the 4x2 but Chicago (Hales Franciscan) and Arcola. And finally watch for Arcola to be the bosses in the 4x4.