-The harse conditions did not deter the heart and effort displayed by the hundreds of young men and women competiting in the 44th Annual Pat Savage Niles West Invitational. It was 39F when the first race commenced at 9am.  It perhaps picked up a degree or two but it was still COLD! 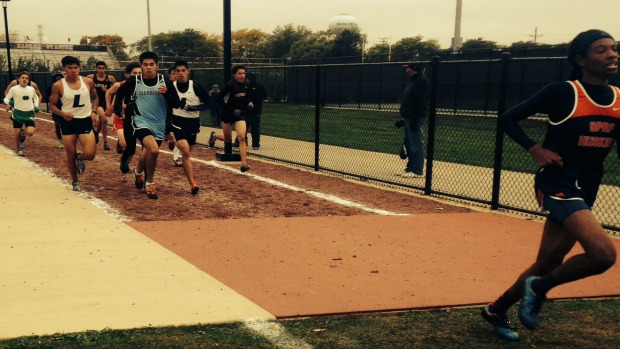 3A #8 Chicago (St. Ignatius) squeezed past Chicago Catholic League rival #5 Wilmette (Loyola Academy) 43-53. Loyola senior Jack Carroll took charge right before the 2m that was negotiated in a balmy 10:27, and then bolted away to win easily in 15:14. The super confident Carroll knew the slow pace suited his finishing kick well. St. Ignatius didn't mind conceding the win because they took the next three spots courtesy of Kaillin Khan (Sr.)- 15:19, Dan Santino (Jr.)- 15:23, and Andrew Weber (Sr.)- 15:26 respectively. The scoring pack dipped to a solid 54-seconds.

Unheralded Oswego ran a smart race in defeating a good Woodstock team that is ranked #15 in Class 2A.  The Panthers put Abby Cain (Jr.) and Alexis Henz (So.) inside the top 10 with 8th and 9th place finishes. Although Woodstock Kate Jacobs (So.) placed 2nd in 18:27, her teammates were spread out pretty far as the 1:42 scoring split indicated. It was 45 seconds 2-5 and that was the difference in the final tally 88-92 that Oswego had. Evanston was 3rd with 121 points. Niles West senior Christine Mujica won her first invitational title in 18:11. Mujica had the race sewed up before the 2m when she crossed in 12:08. Emma Dzwierzynski (So. Evanston) was 3rd (18:39) ahead of Jocelyne Mendoza (Sr., Chicago Taft) who logged 18:43; Emma Makowski (Sr., Montini) rounded out the top 5 clocking 18:53.

THE REST OF THE WEEKEND'S HIGHLIGHTS WILL COME ON SUNDAY!