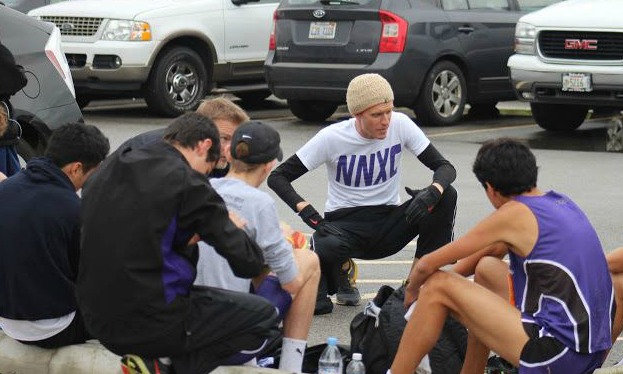 The former Niles North Boys Invitational is now the Dan Horyn Invitational. The once low-key invite that was held on a Tuesday in mid-April has been moved to a date more suitable for a traditional spotlight that many fans and athletes can appreciate.

More importantly than personal accolades that one can hope to achieve this evening at Niles North High's Chuck Pos Stadium is the honoring of fallen former coach Daniel M. Horyn. Mr. Horyn was a former prep great at West Chicago High School in the late 1990s. He later moved on to the University of Illinois and became an outstanding runner winning several Big 10 awards. His yest for running continued on through his life.

For Horyn, it was the teaching and coaching that he had a passion for. He taught English at Niles North for more than a decade and later became the head cross country coach and assistant track and field coach. It was incredibly hard to coach against Horyn because of his infectious smile and warm personality. Normally, those traits don't translate well in the heat of a battle against rivals. EVER. However, Horyn's realness is what made him a legend among the ranks.

Sadly, it was unknown to many outside of Hoyn's immediate family and comrades that he was fighting an aggressive form of esophageal cancer. While he kept an impressive mental outlook, Horyn underwent chemotherapy and radiation treatments and participated in clinical trials, all while continuing to teach and coach. "He gave it his all, and he did everything he could to beat the cancer," said his wife of seven years, Andrea. "In the end, doctors said it was his amazing spirit that kept him alive longer than they had expected." Mr. Horyn would pass away on September 9, 2013.

Head meet officials Paul Swanson and David Shafron worked tirelessly for months to put together a great field that the smiling Dan Horyn himself would approve. Many invitations went out to the best distance runners in the state but previous commitments and conflicts got in the way of what could have been an overflowing field. Still the field that is assembled on this momentum occasion is more than solid. We all should see a great race and don't be surprised if a state best springs forward.


Meet schematics to look out for-

At large coaches do not worry about attending the coaches meeting but please check in at the bull pen or hip number station upon your arrival. The Dan Horyn Mile is set to go off around 8:30 so plan accordingly for travel to allow for adequate warm up.

BUSES: Please have your buses drop your athletes off outside the Team Gate to the stadium. This gate will be closed shortly after 4:00. Teams will need to walk to the stadium from the parking lots. Please have your buses park and wait in the North parking lot of the school. We cannot have any buses parking in the drive. Cars parked along the South drive or in the pool drop off lane will be towed at the owner's expense.

TEAM CAMPS: Please have your team camp in the main bleachers or grassy areas on the South end of the track under the scoreboard. Camps are not allowed on the main stadium field.

CONCESSIONS: There will be concessions and t-shirts for sale during the meet.

Niles North would appreciate your help with keeping athletes off of the main field and especially away from the finish line unless they are warming up or checking in for their events.

BULLPEN: will be the purple benches at about the southern 20 yard line. Athletes will need to check in for all running events at the bullpen on the main field. BULLPEN for the 100,110, 200 and 300 will be at the start line.

SHOT/DISC Implement Inspection and weigh in will take place outside the concession stand as you enter the stadium. Weigh in time is 3:30 to 4:15.

The best of the rest within the Dan Horyn Invitational-

100- Malik Hamilton (Jr., Lane Tech) and Eric McMiller (Sr., Lane Tech) have been renewed renegades this season. They should be at the head of this field. But of course there are surprises in the Century dash.

200- Alex Tatar (Sr., Niles North) was a 22.89 performer here last year and should be the one to watch. By no means should anyone be considered a heavy favorite. The entire field seems even with sprinters listed with 23.0 seed marks.

300H- Pilliod is the class of this field with 39.6 seed mark. He obviously is not in that form yet with only one true race under his belt this season, but he will carry the baggage of missing last year's state final by one slot.

3200m- This should be a good battle among city foes Lane Tech and Mather. Zade Kurdieh (Sr., Mather) ran a personal best 9:43 several weeks ago at Niles West in his signature event. Jon Vara (Sr., Lane Tech) and Christian Badillo (Jr., Lane Tech) will work together to thwart rival Kurdieh. It will take an honest pace to produce some good times. The winner could dip into the 9:30s.

800- David Schmieg (Sr., Lane Tech) is the favorite here and the only one seeded under 2:00. The goal for a good race is to stay focused on the task ahead and get the desired mark. The chasers will do will with following their coaches plans and good times will come for them.

4x100- Lane Tech will roll out its “A" team that ran 43.16 a week ago. The Indians are more of a tactical force than four speed demons. So they will need to keep the transitions and good handoffs going if they desire to improve on the continuum. Loyola Academy and Proviso West have marks listed at 43.20 and 43.30 but that was for last year.

4x200- No clear favorite here. Proviso West could surprise with their 1:31 seasonal best on display. Niles Niles and Lane Tech will give a good chase as will Glenbrook South.

4x400- Throw out the times in this one. The showstopper is always about bragging rights and it will happen again. Glenbrook South, Lane Tech, and Proviso West will fight for the gold medal.

4x800- Lane Tech, Niles North, and Loyola Academy are the favorites in this one.

High Jump- The recently re-instated Jemante Steward (Jr., Proviso West) is healthy along with a better attitude. He should be over his seed mark 6'5.

Triple Jump- Charlie Kogan (So., Deerfield) is a slight favorite but he will face some stiff competition from Adrian Coardos (Jr., Niles North) and Justin Blackwell (Sr., Proviso West).

Shot Put- It is a no-brainer to call Dominic Dibenedetto (Jr., Deerfield) the favorite. The IL#6 performer has thrown the put 56-8 this season. He should be someone for everyone to go and watch.