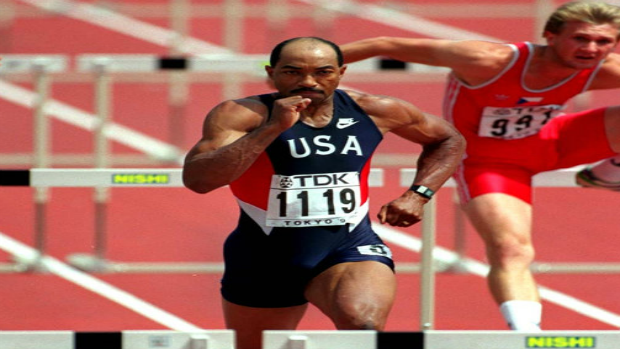 The legend Greg Foster will be in attendance Saturday morning at Proviso West for the meet named in his honor. Photo courtesy of Getty Images

Ahh, the mean old man himself "Old Man Winter" refuses to go to his cave for the remainder of this cold season in the Midwest. Don’t fret though.  Cupid has arrived to put a spell on your winter blues for the weekend. Here’s what on tap this weekend in Illinois:

The inaugural Greg Foster appears to be the signature meet of what is known as the first true invitational weekend of the Illinois calendar.

Greg Foster is a name that is synonymous with Illinois track and field aficionados.  Mr. Foster was a legendary hurdler, sprinter, and relay specialist at Proviso East High School in Maywood during the late 1970s. Foster won numerous state titles and held the 120-yard hurdle record (it changed to 110HH in 1980).  Foster would later star at UCLA where he became NCAA outdoor champion (1978 and 1980) in the 110HH and was the NCAA 200m champion in 1979.

Foster finally hit the mountain top as a professional athlete and Olympian. He won the three world titles in the 110HH (1983, 1987, 1991) and one silver medal in the 1984 Los Angeles Summer Olympics.

The competition itself will be solid as several area key teams and individuals open up their 2014 seasons. There will also be some athletes who have already gotten competitions under their belt.

Chicago North Lawndale Charter will bring their road show to the Proviso West indoor track after turning in some impressive performances at Texas A&M University and the University of Arkansas in January. The key speedsters for the Phoenix will be seniors Imani Payton and Terry McGee. Payton best event is the 300 Intermediate Hurdles, but he has shown tremendous flat speed in the 400m. He has the state’s top mark of 50.30 as well as a sizzling 8.23 for 60HH. Payton has performed well in the long jump and high jump with 21-7 (outdoors) and 6-0 on one occasion.

Matt Anyiwo (Sr., Homewood-Flossmoor) is one of the favorites to win the 3A 800m in May.  But in the meantime he is going to work on his leg speed with the 400m and one of the relays.  Anyiwo has a personal best of 49.5 from last summer. His matchup with Payton should be a great battle.

Glen Ellyn (Glenbard South) will be in attendance despite no senior John Wold. JZ has once again endured ailment that has compromised his training. His teammate senior Joe Singleton is entered in the 1600m and 3200m runs.

Some other competitions around the state:

Wheaton-Warrenville South girls open their season by hosting a five-team meet. The Lady Tigers are expected to be one of the top teams in the Chicago area this year.
Hinsdale Central boys will open up at home hosting the Little Four meet that will see the likes of Downers Grove North and Downers Grove South.  Downers North led by senior star Zack Smith will be in attendance.