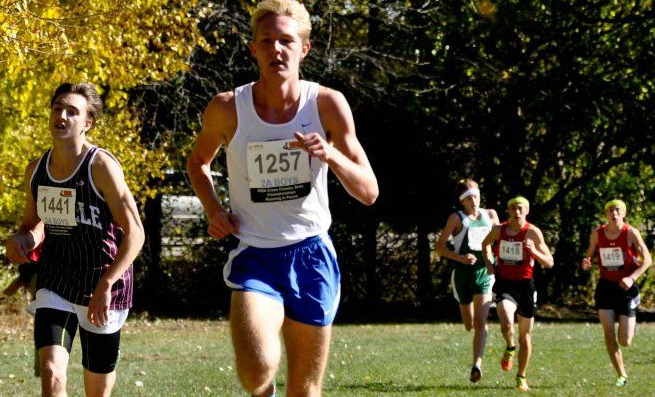 The official 2013 cross country season is now in the books now that 35th Footlocker Cross Country National Championship concluded things last weekend in San Diego.  Before we head off to the 2014 track and field season, we need take some time and reflect on some amazing accomplishments of this past harrier season.  It should be noted that thousands of boys and girls trained hard over the past summer to accomplish their goals and dreams.  To them we want to say nice job and congratulations.  However, there are a few special lads that stood out from the rest and we would like to offer them special recognition.

The questions will always be asked: “how good could have ‘JZ’ been if his high school career was injury free?” How about three-quarter injury free? Over the past three seasons Wold has either suffered a serious leg injury or been fixated with an illness that put a damper on his training and racing. It is uncertain if he could have performed as well as recent state champions Jack Keelan (Chicago St. Ignatius) and Leland Later (New Trier) but it would have been fun to know the odds of such feats on equal footing. Regardless of the 'what ifs', Wold entered the sweepstakes just in time to run in his conference championship and win going away. He continued on and cruised to his second state title in a row making him one of the few repeat champions in the modern era regardless of classification.

We like to say congratulations to John Wold on his Milesplit Illinois Runner of the year!

JZ is an extremely talented and completive athlete who doesn't like to lose; he hasn't lost a race in the last two cross country seasons.  He battled through a plethora of injuries during the season but was able to fight through the adversity and finish strong.  JZ had his best race of the year at the State meet. JZ is the greatest boys cross country runner Glenbard South has seen in it 42 years of existence.  The best is yet to come as he gets ready for track as he has an 800 meter title to defend.


Most improved runner of the year:  Peter Schaible 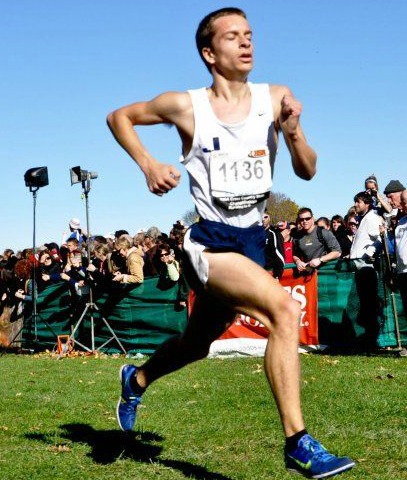 The most improved athlete of the year have often times been of the inflated or overrated nature. It depends on how you look at things.  We say that Peter Schaible (Sr., Chicago Jones) is that guy for the 2013 season.  Schaible has been an impact runner for the Eagles since transferring there from St. Rita in the fall of 2012.  He brought over modest credentials of 15:44, 9:45, and 4:50.  In Schaible’s introductory season at Jones, he often ran as the #4 runner on a loaded team that ended up winning a state championship.  Schaible placed 31st in that historic race.  This season as a captain, Schaible has stepped big off the field as well as on it. Schaible motivated his teammates with action that included winning the Chicago Public League individual title. But the big prize was capturing his first all-state honors with a 10th place finish. 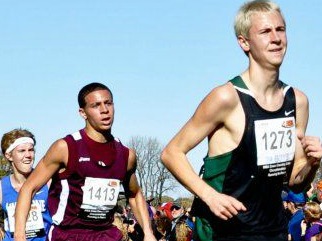 In his first full season as a varsity runner McGuire performed well in running in the #5 and #6 role on a team that was #1 down the homestretch.  McGuire did his job at the state meet in stopping the bleeding with a 52-second scoring split and placing 69th overall in 15:56- a personal best. 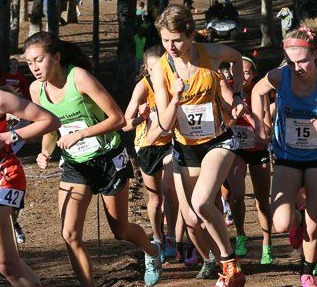 What more can be said about the state's top runner from Riverside-Brookfield? The junior import from Germany took the entire state by storm with impressive win after win.  The bubbly personality also helped subdue her opponents who she often praised after races.  It was during races that she terrorized them with a crushing first mile that put any thoughts of an upset out of reach. Struck blazed to a state championship in the fastest time of the day (along with Effingham freshman Anna Sophia Keller) in 16:35. Struck ran two post-season races that culimated in a fine 18th place at the prestigious Footlocker National Championship in San Diego, CA.  It was easy to say that she accomplished her dream of competing in America.

We want to say congratulations to Mailin and we wish her the best in academics and athletics back in her homeland!

It has been an absolute delight coaching her for this season.  She is a wonderful person with a fun personality and has greatly improved the cross country program at Riverside Brookfield by her presence.  It has been great for my other athletes to see how an elite athlete trains and especially how she takes care of her body on a daily basis.  These good habits have been picked up by her teammates.  She also has a fantastic sense of humor and loves being a part of a team.  In Germany, she normally runs for herself, so this was a new experience for her. She will be missed as a person, not only as an incredible athlete.

Most improved runner of the year: Allie Sprague

For the Marengo senior, cross country has never really been her cup of tea.  Sure, she is one of the most talented middle-distance runners in the entire state as 5:07 and 2:14 marks from the 2013 track season boldly point out.  One would think that excellence in cross country would be academic .  But for some reason Sprague has never really excelled to the level that she is capable of.  Going into this season, there would be several questions thrown her way such as: was the vacancy of former teammate and star runner Katie Adams the reason to step up her game? How about current teammate Kitty Allen running as the top Indian a good reference point for motivation? Whatever the reason is Sprague stepped up her game big time moving from the 19-minute neighborhood to 18:03 and earning all-state honors with a 25th finish place- up from 46th a year before.  We want to stay congratulations to Allie on her fine personal achievement and leading her team to a fourth place finish in the team standings. 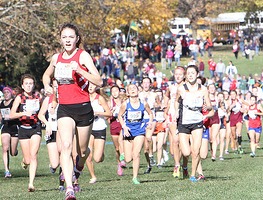 5th runner of the year:

Julia Schultz (So., Yorkville) is new to the scene but her role on the team may be the most important one if you take in consideration… loss of potential top 5 state talent sophomore Summer Peirson… sophomore Skyler Bollinger not hitting on pre-season investment returns…defending the honor of winning another state championship. Schultz ran as cool and calm as any runner put under stressful situations.  She would go on to place 61st overall in a personal best and close out the scoring for the team’s third state title. “ Julia was our fifth runner at state and her stepping up on the biggest race of the year was one of the big reasons we were able to win a third championship in a row,” said head coach Chris Muth of his pupil. “She had been training as our number five runner with our top girls all year long and hadn't quite been able to put it together in a race. She is a very hard worker and is very deserving of the recognition.”