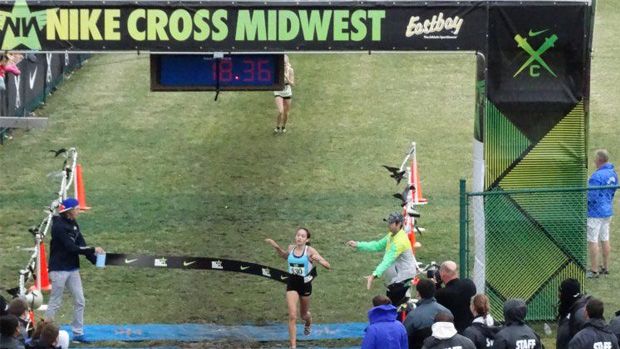 For the second year in a row the revered Carmel boys and girls repeat as Nike Cross Nationals Midwest Regional Champions.  The Greyhounds have the most successful cross country program in Indiana winning 28 total state titles (Girls 15, Boys 13).  So it should not have been a surprise to see both perennially ranked national teams at the top of the food chain on Sunday.

The Greyhound ladies under the moniker Carmel Distance Project easily outdistanced Naperville North IL 66-125. Both teams automatically qualified for the Nike Cross National Championship to be held in Portland, Oregon on December 7.

Palatine IL scored a third place finish tallying 148 points ahead of Columbus North IN 155.  Northville MI competing for the first time as a team (Michigan association rules previously prohibited their member schools from NXN team participation) closed out the top five with 166 points.  Palatine may be a team receiving an at-large bid in several weeks when the selection committee meet prior to November 30. The Lady Pirates placed eighth in the 2010 NXN championship.

The boys side of the ledger was just as competitive as the girls with Carmel punching their tickets once more to Portland taking top honors with 103 points.  Cincinnati St. Xavier will also make a return trip to the Beaver state after copping second place over Illinois’ big class champion Hinsdale Central 120-199.  Columbus North, the Indiana state runner-up, gets fourth place rolling 207 points.  Rockbridge MO beat out nine-time NXN qualifier Elmhurst York IL for fifth 246-251.

Carmel Girls put on a clinic-

The Lady Greyhounds of Carmel know a little bit about competing in inclement weather conditions and running well in them on the Lavern-Gibson Cross Country Course. The Indiana state meet was held in less than optimal weather conditions two weeks prior and the verdict was case closed on the competition.  If that experience wasn’t good enough, last year’s mud fest at Portland Meadows was. In that affair Carmel took home the third place trophy.

Carmel did not play around with the field despite the horrid conditions dictating most teams race plans. The wind was gusting up to 35-40 miles per hour throughout the day along with a very soggy course that at times resembled a marsh pit.  The Greyhounds were led by senior Kelcy Welch.  She was in a tight pack that came through the first mile around 5:48.  The scoring pack 2-7 looked strong in their jerseys marked CARMEL in the school’s traditional blue and yellow colors. The girls stayed in contact amid the big throng of runners.

More of the same followed in the second mile in which Carmel looked strong. Palatine appeared to move up in second mile and in position to get second.  According to acting coach David Cox, he felt that all of the girls took more risks. “Last week at state the girls had an off day including my daughter Liz [Cox].  Kelly was the only one to run well,” he said.  That Kelly would be Kelly O’Brien who placed sixth overall in the state championship. O’Brien continued her surge and paced the Lady Pirates to an 18th place effort.

Although the first place spot on the podium was secured the Greyhounds, the second place position was unclear.

Naperville North head coach Dan Iverson was in attendance to watch his girls compete. IHSA rules prohibit him and other IL state coaches like Palatine's Joe Parks from directly coaching his team. However, the archaic rules did not prevent Iverson from offering an opinion.  “We look real good in that last mile, last kilometer from my vantage point,” stated Iverson. “I’m hoping that we snuck in for second.  I know that we were closing in on Palatine’s entire top seven.”  He was right.  The Huskies finished very strong as Elly DeTurris (Jr.) led the way in ninth overall.  The Huskies willed themselves to finish in the top two with their tremendous depth.  Iverson indicated that the acting coaches made some changes to the line up along with super freshman Claire Hamilton hurting her ankle in Saturday’s course run through.  Hamilton was a key scorer in last weekend’s state championship when she finished 19th.  It was because of a bum injury that slowed her progression. Alas, her teammates would pick up the slack.

The individual affair was not far from the pre-meet predictions. Ste. Genevieve emerging superstar sophomore Taylor Werner took a commanding lead shortly after the gun went off enroute to a comfortable lead.  She led at every key checkpoint including the first kilometer, mile (5:41), 2k (7:13), 2m (11:43) and most importantly the finish line (18:36). Although she was pressured in the last 200m meters of the race, the victory was secured and not much of a threat. “Jamie, I know her well- she’s really good friend of mine… I started to kick it in real well at the finish,” elaborated Werner. Fellow Missourian Jamie Kempfer (Sr., Festus) took second in 18:42. Malyka Abramson (Jr., Avon IN) used a furious kick in the final 50m to edge out Welch for third 18:48.5-18:48.6. The Show-Me state punched another ticket to Portland as Jill Whitman (Sr., St. Louis Cor Jesu Academy) took fifth place in 18:58.  The Portland qualifiers were not done as freshman sensation Anna Sophia Keller of Effingham St. Anthony got the final national championship berth with a sixth place finish running 18:59.  The top five individuals not advancing as a member of a team qualify for Portland.  Keller receives that nod because Welch will accompany team winner Carmel to the City of Roses.


The Greyhound boys duplicate their girls-

The Boys race was moved up in advance of an impending serious thunderstorm that was making its way toward the Vigo County area.  The first mile certainly played into that effect as the leaders crossed in 5:02-5:03.  No one in particular wanted to lead in harsh conditions that would ultimately play against them.

The huge pack would stay together for another kilometer before Evan Stifel (Sr., Cincy St. Xavier) took off like a bandit. Stifel would not be heard from again.  He led at the 2nd mile in 10:12 and then one more time before the finish at the 3m marker in 15:32.  His final time was 16:03- one of the slowest winning times on the LaVern-Gibson course, but that was not important as the senior was all smiles afterwards. “I really didn’t have any goals of winning this race.  I was hoping to get in the top 20,” he said.  His teammate Michael Hall (Sr.) posed more of a threat during the pre-race based off of season bests and his prowess of the mile (4:09 last season).  Hall was hobbled by a leg injury and only finished 20th.

McHenry IL junior Jesse Reiser continued his great season pulling away from Hoosier Zach Panning of Ft. Wayne Concordia 16:11-16:16.  Panning got some redemption after his undefeated season came to a crashing halt on this course two weeks in the state championship.  Panning was leading eventual winner Jackson Bertoli (Terre Haute South HS) by a substantial margin but fell unexpectedly with less than 400m to go. He tried to reboot his system several times but fell to the ground and unfortunately finished in 22nd place.  Now the senior will be off to Portland competing in a national championship race.

Evan Shulte (Sr., Rockridge MO) took fourth place ahead of Zack Smith (Sr., Downers Grove North IL) 16:16.7-16:17.0. Elmhurst York’s streak of qualifying as a team for the 10th straight year came to a halt but senior Nathan Mroz got the last qualifying berth placing sixth in 16:21.  The winner will go via his team’s auto qualifier.

Pre-meet favorite Patrick Perrier (Sr., O'Fallon) was well on his way to Portland until bad luck struck him.  He had to drop out of the race with one kilometer to go because he reaggravated a sore ankle that he twisted after state. "I had some ankle issues a couple days after state. It flared up this morning. I stretched it and everything was good but sliding around in the mud around that 4k mark tweaked it out again', said Perrier.

The story of the day belongs to the winning team Carmel.  The Greyhounds like many outstanding teams on the national level use a strong pack running attack to get their point across to their foes.  The 32 second split was achieved like a keen surgeon’s hands on a knife.  Carmel knew that brutal weather and course conditions played into their favor.  There would be no urgency to run a hard pace from the gun and hoped to hang on.  The slower the pace the better and the final results show it.  The Greyhound express went as follow: sophomore Ben Veatch 9th- (16:28), senior Robert Browning-22nd ( 16:42), senior Ben Anderson- 23rd (16:44), senior Michael George- 36th (16:57), sophomore Thomas Revard-44th (17:00), senior Daniel Sechuga- 59th (17:08), and senior Josh Horowitz -79th (17:17).  This team will have an opportunity to improve on their 11th place finish from a year ago as four members return back in action.