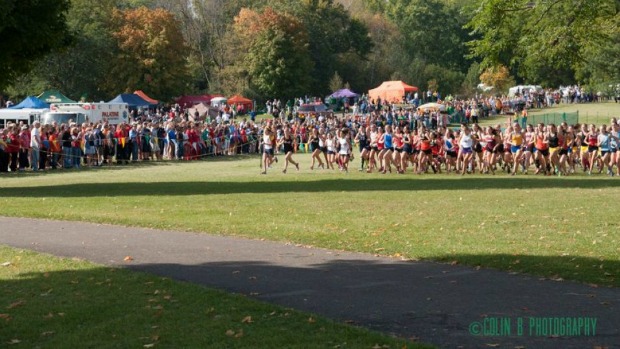 
For the first time in two years, the home state boys and girls won team titles and wrestled them away from the Kentucky visitors.  Indeed it would be a great day for the cross country fans of Illinois.


York continues its mastery of the competition 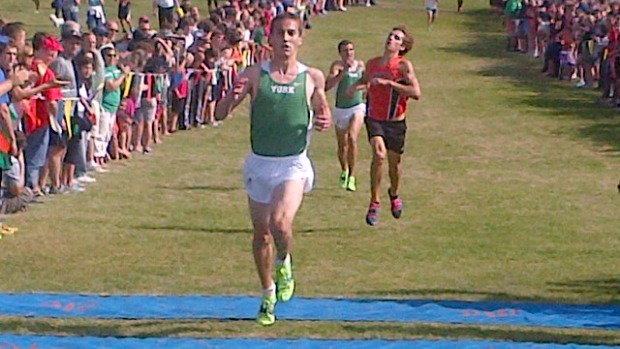 Coming into the meet there was a lot in stake for many of the teams.  York lost to St. Xavier by a handful of points last year here before getting its revenge at the Nike Cross Nationals.  Still, the Dukes would not be satisfied.  They have won 11 meet championships in modern day history but none since 2010.  So, the incentive to win a 12th one would be fresh on the mind.

The race got off without a hitch as the front running Jesse Reiser (Jr., McHenry) took the lead shortly after things began to settle down.  The Deer Grove course is an interesting and scenic place to watch a cross country race because the key landmarks are in areas where fans don’t have to travel far distances.  For example, one can get from the first to the second mile by merely trotting.  The same can be said about the first and the fourth kilometer marks if metric reading is the desired choice.

Reiser hit the first kilometer in just under 3:00 and the mile in 4:45; he was about three seconds ahead of Graham Brown (Jr., Palatine) and Ryan Pitner (Sr., Crystal Lake Central).  Almost immediately a few seconds later the team outlook was beginning to form.  York had numbers on the field as it appeared that Alex Bashqawi (Sr.), Nathan Mroz (Sr.), Kyle Mattes (Sr.), and Matt Plowman (Jr.) were among the lead pack that ran in the 4:52-53 time range.

Although Reiser was still leading the race going into second mile, his body language was telling another story.  He looked somewhat tight and bouncy.  He must have sensed his lead was closing down by the chase pack. The legendary York coach Joe Newton peered from his golf cart seat and remarked that his team was doing well.  “It looks like we got four guys [in the lead pack],” he smiled.  Actually, the fourth runner among the Dukes senior trio was Sam Oh (Jr., Stevenson).  He tucked in wearing a white singlet with green shoulder straps that resembled York.

Reiser was 9:52 at two miles and just two seconds ahead of the aforementioned chase pack.  They were coming!  York’s fourth runner Plowman fell back behind Maine South senior Jack Carpenter who looked strong.  A string of runners began to follow in the low 10’s.  St. Xavier was beginning to exert themselves with lead runner Chris Striegal (Sr.) moving strong in the second pack.  The Tigers put four runners in the top 20 through the second mile.  Hersey was also running strong- top man David Rodriguez (Jr.) in the top 15.

Finally, at approximately 4k into the race, Reiser was caught by the York trio and Oh.  It would be a race to the finish.  Reiser tried to launch a last ditch kick with approximately 200m from the finish line.  Unfortunately for him Bashqawi is more of an 800m runner with superior leg speed.  Bashqawi eased past him for the win in 14:43.  Reiser, who looked ragged, barely held off the hard charging Mroz for second.  The surprising Oh ran a personal best 14:52 to take fourth. Carpenter copped fifth ahead of Mattes in 14:55.  Reiser ran a solid race but he felt pressure when the chase pack caught him late in the final stages. “I definitely felt pressure because York is one of the best teams in the nation,” he said.  “I knew they were going to be picking on me and I knew they were going to make their move and work together…”

The team battle was not as exciting as the individual race.  Assistant coach Jim Hedman appeared to be somewhat surprised of the outcome as well. “We ran a dual meet on Thursday against Lyons Twp and Downers Grove North and we ran well, but we wanted to really save it for Saturday,” said Hedman.  “We knew that [St. Xavier] was real good and we wanted to compete well against them.” Perhaps both teams will meet again in December at NXN to settle the score. 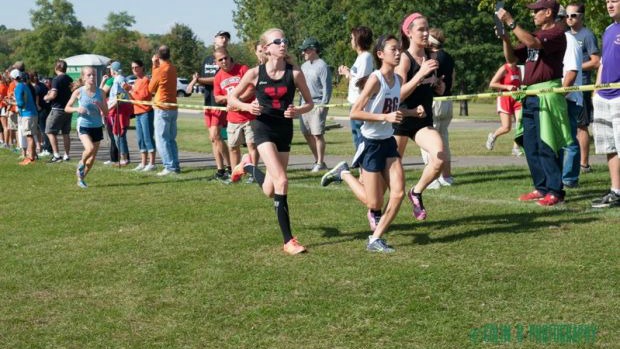 Palatine head coach Joe Parks knew how good Assumption was coming into the meet.  The talented and deep team from the Bluegrass state had previously won the last two Pirate Invites by wide margins.  Although the Rockets return a bulk of returners they would be a little thin talent wise within the varsity seven.  “This was our second race [of the season], but after holding back a bit at the Mason Invite (Ohio), this [would be] our first real race of the season,” said head coach Barry Haworth.  He also mentioned that key senior runners Bailey Davis and Katherine Receveur were coming back from injuries and competed in the junior varsity race.

The race needed three tries before getting started.  The lead meet starter recalled the action twice.  The girls ran about 100m before the starting pistol halted the action.  There wasn’t a definitive reason why and the only thought was that someone fell or the timing system didn’t register.  It was almost a duplicate on the second call back.

The third attempt was true and the race was off and running.  Sophomore Skyler Bollinger of Yorkville, one of the pre-meet favorites, got out well and was in the lead pack after the first half-mile.  Whitney O’Bryan (Sr., Daviess County, KY) and Kaitlyn Ko (So., Buffalo Grove) locked on to Bollinger as they reached the first mile in 5:36.  Prospect’s Brooke Wilson (Fr.) was running on an island between the leaders and the massive first chase pack.  The chase pack contained an assortment of girls from key schools.  The Barrington duo of Caroline Reynolds (Sr.) and Lauren Conroy (So.) was there.  So was Lauren Opatrny (Jr., McHenry), Sara Atkins (Fr., Wheaton-Warrenville South), Emily Bean (Sr., Assumption), Lexy Rudolfski (Sr., Lyons Twp.), and a slew of Palatine runners in the 5:40s.

The second mile was negotiated in 11:35 with O’Bryan, Ko, and Bollinger just off the outside edge.  The chase pack featured Lainey Studebaker (So., Centerville, OH), Wilson, and Amelia Reynolds (Sr.) checked at 11:50; Bean, Atkins, and Opatrny came through in 11:53.  Also, the team battle between Palatine and Assumption was tightening up.  Assumption had three girls ahead of the lead girl, but the Pirates had the next four in the low 12:00’s.

At 2.5 miles, O’Bryan began to open up a gap on Ko and then a fading Bollinger.  The team race looked the same as it did before with the outcome most certainly coming down to the all important fifth runner.

O’Bryan would coast home to victory in 17:20.  She will definitely be a name to watch out for on the national post-season scene.  Ko kept her composure in holding off Bollinger, who later stated that her legs tired out in the final mile.  Ko ran 17:25 to Bollinger’s 17:31. There was a sizable gap after Bollinger that Studebaker filled in 17:47.  However, there wasn’t much change from the second mile to the finish for the first ten runners.

As for the team race, Palatine was able to run a sweet scoring split that tallied 13-seconds. “Kara Burton saved our [tails],” said a less than thrilled coach Parks.  Burton was the Pirates top finisher in 15th place. But sometimes it is the team that can survive a “mediocre” performance as Parks put it, is the team that will be dangerous in crunch time.