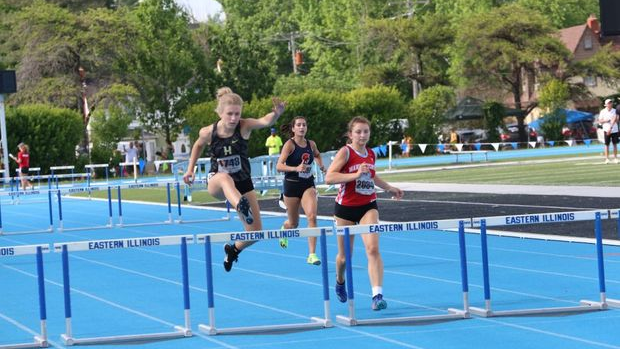 The main storyline 2021 IHSA State Track meet was about 'presence'. The whole state was again present at the blue track in Charleston. The athletes and coaches from each corner of the state were finally present together. The crowds were 'presented' with some of the most iconic races ever on this side of 2000.

However, there was one storyline of 'absence': where were all of the technical event's qualifiers?

In this piece, we define the technical events as the six field events (long, triple, and high jump, shot put and discus, and pole vault) and the two hurdles events (110/100 hurdles and 300 hurdles). In 2021, there was a noted lack of automatic qualifiers based on marks across each gender and division. See the below table summarizing those numbers.

Number of Automatic Qualifiers to the IHSA State Meet by Mark, 2021

Source: IHSA Track & Field Records & History
Another way to illustrate this trend is to show how many total athletes were under the qualifying mark total. Remember that the qualifying mark is the five-year average of the 21st qualifier in 3A and 1A, and the 16th qualifier in 2A. This means that 21 and 16 are the expected numbers for a year of 'average' strength, respectively.
Number of Sectional Performances Under the Qualifying Standard, 2021
Source: IHSA Track & Field Records & History
The Pole Vault and High Jump results have unique behavior since the marks are pre-set and many athletes qualify on a tie, so the five-year averages often will not change much. Discounting those two events, the Triple Jump in Girls' 3A was the only event whose state-wide performances exceeded the previous average. Will the number of Long Jump auto qualifiers continue to be on the rise this year?
What do we make of these numbers? -
This trend was universal and concerning, but for many coaches, unsurprising. The year of separation due to COVID was bound to disproportionately affect technical-dependent events. Distance and even some sprint training can withstand remote coaching in ways that throws, jumps, and hurdles cannot. Still, the state is at its best when all the athletes are at their best. We will have to weather this spring as a 'down' year in these events, many said.
Fast-forward nearly a year and the Girls' sectionals approach this week. Has the state made progress in its bounce-back "sophomore" year of COVID recovery? Using the number of marks under the state qualifying standard is a good place to start.
# of Illinois Marks under the 2021-22 Qualifying Standard as of May 9th, 2022
Source: MileSplitIL State Outdoor Rankings

Keep in mind some of the following points when comparing this last data set: These numbers may include results not rigorously verified, as well as marks from three or more athletes from the same team. We are also at a different point of the season, entering sectionals/conferences after what has been an unusually blustery, cold, and precipitous season. But since the qualifying standards have not changed over the previous year, this can give us a good point of comparison between this year and last year.

Outside of the High Jump and Pole Vault, there are now nine events that match or exceed historical expectations, of course slightly inflated. So, Illinois as a whole is crawling back to its usual pace, but just as slow as many coaches feared in 2021.

Which of these numbers stick out? There is a bit of feast or famine with some of these events--Long Jump in 1A and 3A Girls' has strengthened considerably, and look at that number of 1A Girls' High Jumpers already over the auto qualifier. But take a look at the hurdles in particular. A cynical view may be that rather than a technical events problem, there is really a hurdles problem.

Last year, not a single hurdle event had more than two individuals qualify automatically based on the standard. The 300 hurdles could only produce five such qualifiers across all six divisions. The trend so far this year appears to have a similarly dour outlook. Is the weather a sufficient explanation for the dip in performances? The single-length 100 hurdles races, perhaps. But the 300 hurdles should not be as adversely affected by wind alone. Coaches should be expecting a minimal number of additional qualifiers out of the hurdle events this year.

However, it is not yet too late for Illinois hurdles to turn it around. The approaching warmer weather and heightened competition of the state series should raise each of these numbers greatly, but only time will tell if it will translate to more lanes in Eastern Illinois being filled. How will these two years have an effect on the qualifying standards moving forward? Even just two years of minimal athletes exceeding the standards can have a drastic effect on the standards if the IHSA continues to utilize a five-year rolling average. We may be discussing massive technical events fields in 2023 and 2024 if teams strike while the iron is hot.

But it is still 2022, so let us focus on this year's state meet. Although sectional performances have shown volatility in the last two years, state meet performances tend to be stable given constant conditions. There will be many technical event athletes crushing their personal bests at the state meet this year, and you can book that. These events can be easy to overlook with such compelling sprint and distance events, particularly in the largest classes.

We have seen this story a thousand times before. In a flattened environment, stars always rise up out of the woodwork. The dire numbers shown aren't a reason to be doubtful of this state series. These show a great opportunity to be seized by the jumpers, throwers, vaulters, and hurdlers across the state. Who will seize it? Will it be you?