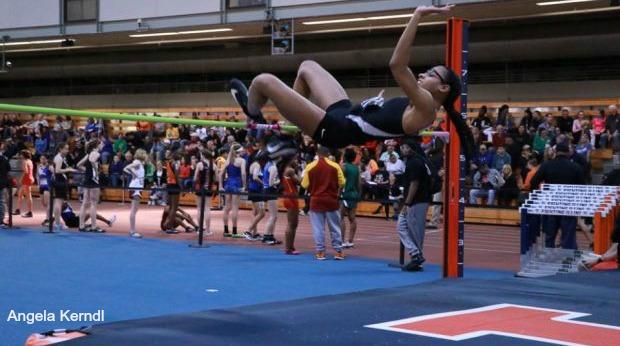 This could be the season that we see record heights from Diamonasia Taylor
High Jump-
2018 State Champion: Diamonasia Taylor (Jr., Urbana) 5-7
Key returners: Taylor, Ella Englehardt (Jr., Aurora ([Central Catholic]), Haven Lyons (Sr.), Morton, Mariah Ball (Sr.), Mattoon, Sarah Flight (Sr., Charleston), Abby Reakes (So., Geneseo), Megan Barton (Jr., Carterville), Ashlyn Papin (So., Hillsboro), Macie Gebhardt (So., Sterling)
Outlook: This event is slowly but surely becoming one of the premier events on the docket. It was two seasons ago that we saw the remarkable Jelena Rowe of Bloom Twp. HS leap over six feet indoor at the Gene Armer Invitational. It was at that same time that a then starry-eyed freshman Diamonasia Taylor in complete awe. After she composed herself, she would take second. Now it's her time and after jumping a personal best 5-10 last year along with a state title, the six-foot barrier is in sight for the US #7 returner.
There are eight performers back from last year's state final. One name, in particular, is Sarah Flight. She has cleared 5-7.25, making her the second best returner in the classification. However, Flight had a bit of trouble down the stretch of the season like placing a disappointing 11th at state. She is and was better than 5-1, especially after placing second in 2017. The key for Flight and others will be consistency... Ashlyn Papin is the third best returner according to the numbers but missed out on the state meet. Experience is a great teacher and she will be more motivated than ever.
Tweets by MilesplitIL