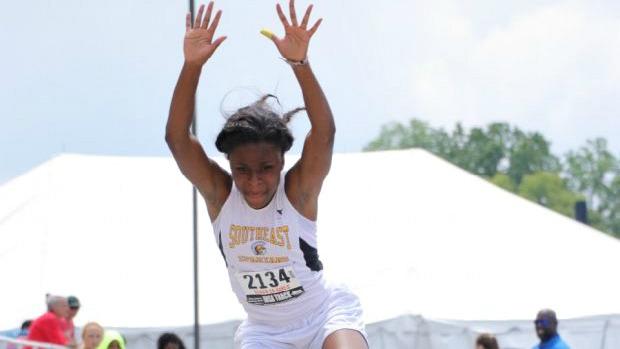 One of the nation's best jumpers, Serena Bolden will be on center stage this season

Triple Jump-
2018 State Champion: Imani Carothers (Chicago Brooks) 40-3 [+0.8]
Key returners: Tiera Robinson-Jones (Jr., Evergreen Park), Jayla Campbell (Sr., Olympia Fields [Rich Centra]), Serena Bolden (Sr., Springfield Southeast), Chelsea Wells (Sr., New Lenox ([Providence Catholic]), Summerlyn Smith (Sr.), Mattoon), Sabrie Strong-McCloud (Jr.), Decatur MacArthur), Lucy Czirjak (Jr., Peoria [Notre Dame]), Lauren Roskuszka (So,, Aurora [Rosary])
Outlook: Without a question, this is a star-powered event with the likes of Jayla Campbell, Tiera Robinson-Jones, and Serena Bolden. Bolden was not happy about coming up short much less in fourth place at the state meet. Bolden was able to make amends by winning the USATF JO Nationals title with an impressive 41-6.75. One of the all-time greats from the Spartans program, Bolden has the grit, swag, speed, power, and all-around talent to get the job done. There is no doubt that this her event to lose during the peak championship season.
The underrated talent of Robinson-Jones came during the post-season when she surprised many competitors and placed second ahead of Bolden and Campbell. Robinson-Jones used her tremendous speed, power, and strength to command the runway and pit. Expect her to improve over the 40-foot mark if she keeps this event in her toolbox. Campbell has been overlooked as a jumper for her prowess in the sprints, but the truth is she is a great triple jumper. It is hard to argue with someone whose all-time best is 39-1 and two top three places at state- both ahead of the superstar Bolden!
Tweets by MilesplitIL