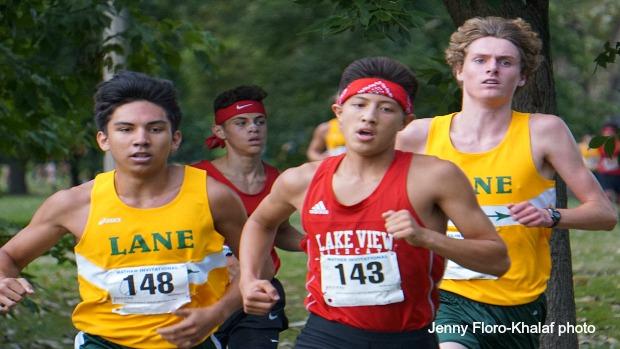 Mather High School in Chicago has been a nice and consistent source of developmental running for the Public League over the years. The far northside school hosts three meets at Legion Park on a small oval that is one-mile around. The race distance, though, is of a two-mile variety which in developmental terms, is the perfect length.

Series race #3 typically is termed the "championship" because of the large quantity and quality of teams. Some of the best squads in the city who attend will bring their "A" units and compete well. Lane Tech is one team that enjoys the hospitality that Mather provides for its large program. In addition, since the Indians have a long layoff between meets, it is wise to get in a hard effort before moving on.

Individually, senior Ethan Breen of Lake View won in 9:57. The first mile was breached in around 4:55-56 with Burke-Olsen, Burns, and Breen running step for step. Breen would pull away inside of the final quarter-mile leaving the field to fend for themselves.

The girl's team component saw one of the top squads in Taft nearly fully loaded. The Lady Eagles did not waste much time in asserting themselves. Led by junior Sydney Partyka of Taft, she navigated the first mile in approximately 5:45. She would be in the clear and win going away in 11:50. Payton senior Ella Marden took second in 12:37. Taft will go on to dominate the 14 team field with 31 points. All five scorers placed in the top 15.