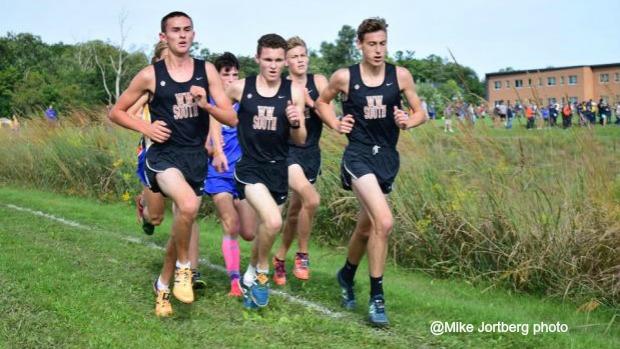 The Wheaton-Warrenville South pack put a hurting on the competition

Normally top notched programs usually use secondary invites as opportunities for their deep fleet to gain experience. They may even "tempo" them and work on strategies. For the Wheaton-Warrenville South Girls and boys programs, it was not about looking ahead to the massive Peoria Notre Dame "Richard Spring" Invitational next weekend, but more so of executing the game plans of head coaches Chris Kurtz and Rob Harvey.

The Tigers swept the frosh titles before moving on to the varsity level action. The #3 ranked girls deployed a strong lineup which featured the front-running sophomore Sam Poglitsch and senior Laurel Moneysmith. As expected Poglitsch pulled away from the pack and ran solo for most of the way. She would go on to win in 18:10. Moneysmith finished second ahead of fellow talented runner junior Fatima Giron of Round Lake 18:39-18:53. The Lady Tigers put the finishing touches on the rugged three-mile course in the far Northwest Chicago suburb of Island Lake. It was two more girls inside the top ten with juniors Haley Ansiel and Kaitlyn Nenninger placing sixth and seventh overall. Another junior Maria Rucoba just missed the top 10 but took 11th and closed out the scoring with 24 points. The team only had six finishers but had anyone else not finish, senior Sara Michalowski's 14th place would have been good enough. That's depth for you.

The #1 boys opened their season like a pack of hungry piranhas let out into the Amazon river. From the gun, the Tigers were up front. Juniors William Hauenstein, Jacob Kluckhohn, David Zeller, and Jared Peaslee and pushed the pace with several runners for much of the race. Another runner senior Matt Rice was intact (until getting DQ for wearing a hat). So the margin of error to finish was pertinent with five starters in the race- if they cared. Hauenstein held strong and pulled away from Kluckhohn to win in 15:41. Kluckhohn produced his best race in a Tigers uni with a runner-up finish in 15:47. Zeller and Peaslee checked in at fifth and sixth place, clocking at 16:11 and 16:14. The fifth man, of course, was junior Joey Franke who placed 12th in 16:59. The Tigers smashed the field scoring 26 points and will get their crack on the Detweiller course next weekend.