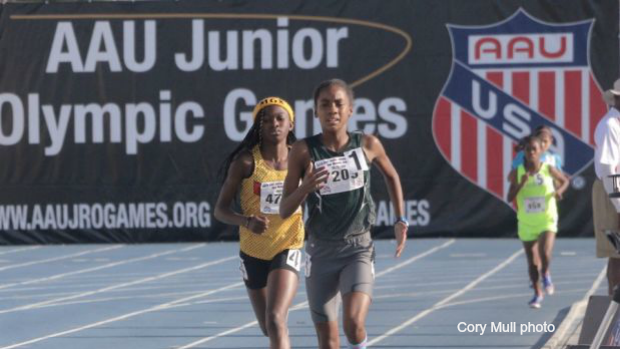 The 100F days have leveled off, cross country and football seasons have arrived, and I've gotten my son settled into college and football.  The summer track season has come and gone and so has my 20thseason with my squad (Dominators).  It was interesting, to say the least.  The weather covered all the bases from cold to rain to heat, keeping many coaches and athletes didn't feel truly lathered up until nationals.

The coaches had to deal with their usual issues of summer track.  A top-notch coach in Illinois was highly upset because he had coached several girls from the depths of being scrubs and as soon as they became "respectable" they decided to take flight and complete for another team. Ironically, that coach had nothing to do with their success. My friend in Nebraska who has a team, had a podium-reaching athlete pull out the AAU national meet the day they were leaving. After practicing all summer, AAU cards and event entry fees paid, the athlete decided to focus on football season. So why even bother running if you knew you weren't going to go the national meet? Another coach from a Georgia relay team made it to the USA 4x1 national meet in North Carolina. The parents and the athlete didn't stick around to find out if they had qualified for the finals and headed back home. By the time the coach found out, the family was back in Georgia. Are You Serious!?

Summer track is basically the minor leagues for college track. The athletes seen at nationals are the ones that go on to college and even the Olympics. I've had coaches try to convince athletes that winning a state title is bigger than winning a national title. Many of the state finalists can't make it out the prelims at nationals. There were several athletes who did well at state, but found out quickly school success doesn't always translate to success nationally and that you can be humbled and destroyed quickly. It's a different level! There were athletes who were DQ'd, didn't finish, were in position to make a final but when the pressure of the semi-finals came, they simply "wet the bed". A dominant athlete, when healthy, has dominated the state in sprinting the last four years; made all-American status but was last in the finals (twice). Illinois had a lot of relay success at both national meets. But ladies and gentlemen, boys and girls, Colleges Don't Recruit Relay Teams! But we'll take the medals. Way to rep IL! 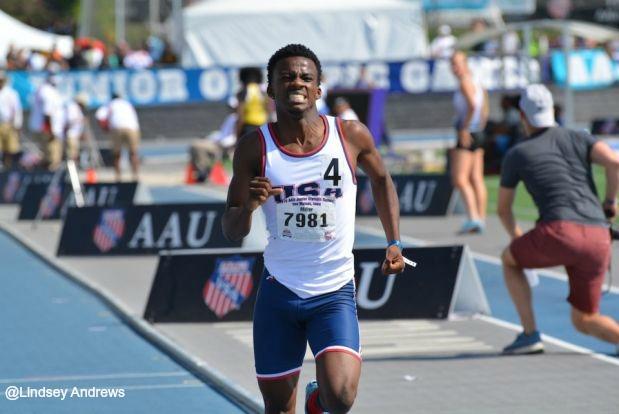 A huge problem for athletes transitioning from high school track to nationals is that coaches train their athletes for one day meets, not rounds. The state meets for school, summer track state, even the national qualifier are weekends. At nationals, especially if you're in two events like the 100 and 200, it's a WEEK. If you've never dealt with it, you can't prepare for it. AAU 100m prelims were on Monday, but it's really a final. There is no shutting it down or cruising to the semis. My 11-year old athlete was #2 in her heat coming in but was lined up next to the #2 girl in the U.S. If you advance to the semis, it's on Wednesday. Tuesday is the 200m prelim, and again my girl had the #7 girl in the U.S. in her heat. By the time Wednesday arrives for the 100m semi, you've had to run a HUGE PR just to make it and the level of pressure has gone up BIG. The winner of the heat is automatically into the final, so maybe five spots are left with three heats taking place. Thursday is the 200m semi and by now you're tired, the hotel has gotten louder at night because people have been eliminated, and the week and heat has worn on you. You realize that to make the final you will have to run another PR that's way faster than the one you ran to make it to the final. Friday could be a rest day for you unless you're like my girl who had the long jump. Saturday is the finals for both the 100 and 200m. As you can see, you must have mental and physical toughness for the task.  We quickly learn who is in shape, been coached, and can handle adversity.

Both USATF and AAU had storm delays that forced sprinters to run past the scheduled time, thus shortening the evening and preparation for the next day's round. The time for the next day's event doesn't change. You must prepare for a week, not a weekend like the high school state meet.

Illinois had some big wins at both national meets. Serena Bolden of Springfield Southeast won the 17-18 age group title at 41'07 ¾" and 3rd in the long jump 19'04". Willie Johnson of E. St. Louis Sr. impressed me with an AAU national title in the 400m at 47.82. Taylor Gilling of Highland Park placed 3rd at USATF in the 200m at 23.75. Taylor Tilmon of Lakes was 2nd at 54.46 in the 400m. We even had a couple of IL greats finish their first year of college and returned to win titles. There were even former high school superstars in the field. Jelena Rowe of Bloom Twp. won a USA high jump title at 5'10 ¾, and Kathleen Young "KD" of Warrensburg-Latham won a USATF title in the shot at 50'00 and took 2nd in the discus. 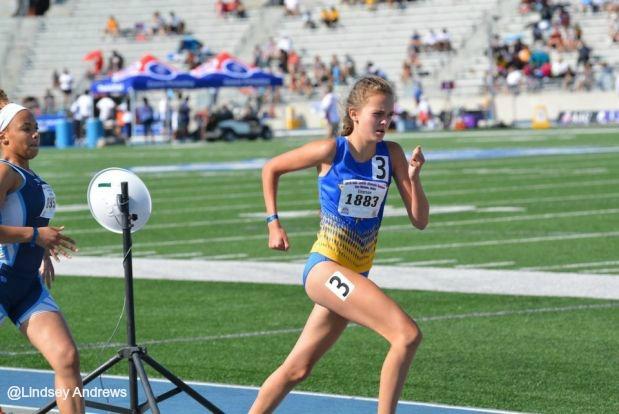 Every few years I let my boy T Jones know who the next greats are way before they get to high school. I haven't been wrong yet. So, here's your preview of the future. Ray Zhao (Flippn Flyers) got my attention at the AAU national qualifier. He won a USA HJ title easily with 6'04 ¾. He was 7th in the TJ at 40'11 ½. Then the following week he came to AAU nationals and won another HJ national title at 6'02 ¾ and took 4th in the TJ at 40'11 ¾. Ray's USA national HJ jump would've tied the 17-18 national champ.

Ayah Mustafa of Homewood Flossmoor/Team Illinois was 2nd in her 400h heat and ran 15.59 in the 100h placing higher than Class A great Kenli Nettles of Arthur Lovington. I'm telling you, watch out! Aliza Welker of Kickapoo is a name to watch. She was 5th in 13-14 USA LJ at 17'05 and 10th in the 100m at 12.42. Aliza's 17'05 would've been 5th in class 1A and 6th in class 2A at this year's state meet. My last one is Myles Lincoln of Plainfield South. I've known Myles forever since when he was competing against my son in the primary division. Myles was 3rd at the AAU TJ in 44'11 ½. He'll come in under the radar this his junior year BUT in Class 3A 8 of the 12 in the TJ graduated. A podium run??? This next one is in Indiana. PLEASE pay attention to Ramiah Elliott. The future North Central HS is a MAJOR problem and makes it look easy. Ramiah was 13-14 USA 200m champ at 23.84. Nobody in the Illinois state meet ran that fast this year. She also won the 400m at 54.62. That would've won the 3A title which was 54.72. The good news is, she lives in Indiana, but keep an eye on her nationally though.

I realize there are a lot of coaches nationwide who can't stand indoor or summer track clubs.  But the reality is, it's on such a high level that a lot of school coaches and administration can't understand what it brings or how it can change your life in an instant. It must be seen to be believed.  When you're at nationals and see the likes of Brandon Miller the AAU 800/1500 national champ.

Tyrese Cooper of the state of Florida has serious range winning the 100, 200 and 400m AAU titles in his last AAU national meet. Cooper and his MGX (Miami Garden Xpress) teammates don't even have a track to practice on.

I have seen how summer track can change your life in two laps. An athlete on my brother's team, KY Elite, came to AAU nationals ranked 13th or so in the 800m. He brings her to me and says, "Big Brother, give her the speech!" I didn't have "The Speech." As I talked to her, I noticed how she hung on every word I said. So, I really started pushing buttons. Nobody was recruiting her. When the 800m was over she ended up 3rd in the U.S. shocking the world and getting on the podium. As she walked off the track a college offered her a full-ride scholarship on the spot!  Two weeks later the U of I calls and is very interested. All off one race at nationals. If she hadn't run summer track, none of this happens. I don't even remember what I said but I guess it worked.

Summer track was and is a HUGE part of my life and its huge for the parents and athletes involved with it. You build character, maturity and it teaches you how to be mentally and physically tough. I told my athlete, "you're 11 and running at Drake where many greats and Olympians have run". I had to go to college to run on that track. Overall it changes lives and honestly the future of U.S. track & field is in good shape.