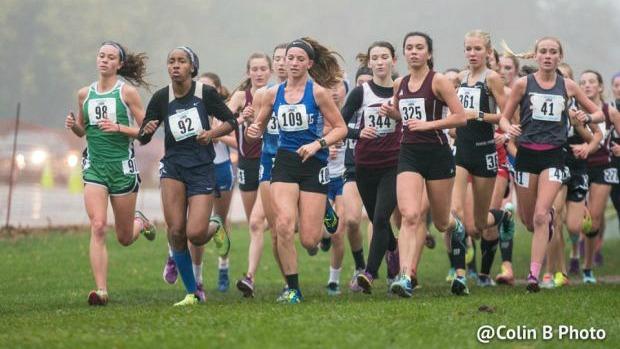 We have finally reached the pinnacle of the girl's spectrum. St. Joe-Ogden and Tolono Unity appear to once again be ahead of the field in talent and depth. But the race to the top of the podium will be met on the field of play, not on paper.

Key returners according to the head coach: We lost Kayla Whitworth to graduation and we lost Ellie Hatter who is moving; however, we still bring back 5 runners from last year's top 7. We also get Jessica Shepherd back in the mix after being hurt with a stress fracture last season.

Projected top 7: It's always tough to say who the top 7 is going to be, but I would expect each of our key returners to be in the mix. We have alternates from last year's postseason roster who will also be competing for top 7 spots, including Brandy Stambaugh, Jamie Hock, Page Lee, and Hailie Peterson. Newcomers: We have a great group of freshmen (9 total) working extremely hard and will serve as the foundation for the future of our cross country team!

Coach's thoughts on the team: We have had a great summer in regards to our training! The girls have worked extremely hard. We had great attendance all summer long. We went to a team camp at SLU, did some fun off-campus runs, and had some fun team-building throughout the summer as well. We finished off our summer training by racing at Detweiller at Dark. It's a team with great leadership as well. The girls have some big goals for the fall and are very motivated.

Tony's thoughts: It will be an interesting year for the Royals who return all seven starters from last fall's state championship. Madison Franseen is expected to lead the charge once again, especially after having an all-star season last year. Her mates will need to step up their game and be a complementary force like they can. Part of what a pack is supposed to do is to position itself and move up accordingly. We will see if it can be done this season.

Head Coach: Ken Klipp
Last year's finish: State- 13th place
Key returners: Eden Rainbolt, Faith Provost, Madison Hamilton, Jade Baker, Anna Latham, Kaylee Woolman, Shelby Corbett
Projected top 7: see above
Newcomers: Jade Baker, Shelby Corbett
Coach's thoughts on the team: Like all teams, you have to preface it by "if we stay healthy." Last year, at state we had one top 5 girl drop out, one was sick, and one had a stress fracture (and we still finished 13th). If healthy, we should be pretty good. Baker did not run last year, but had a good track season, and should fit in around 3rd or 4th. Rainbolt was 18th last year as a freshman, and Provost has finished as high as 27th (stress fracture last year=50th). Pretty experienced group - all been running since 5th grade. Hoping for top 10 - maybe top 5 in a perfect world.

Tony's thoughts: Caroline Gwaltney will lead the charge again this season. The all-stater should have plenty of help as the team will look to rise into the top 5 category. It means that a tighter scoring split will need to be in order, though the team ran well 1-5 most of the season.

Projected top 7: all from above

Newcomers: No Freshman class- so no help

Coach's thoughts on the team: This team will need to get the job done this season with three or four seniors in the top seven. We were pretty beat up after track season with tendonitis, tight IT bands, and a stress reaction. No one was really able to get into summer running until the second week of June.  Renee is still not running but getting better so we are hopeful. Savanah and Payton are looking fit as they are getting more miles than last summer. Mary Grace running full strength after her stress reaction in a hip, and Renee will be running soon.  there are many good teams in Class A cross country this season so a finish better than last year's 8th place will be no small feat, but that will be the goal - beat last season.

Tony's thoughts: All seven return from a team that was less than 20 points away from the podium in Peoria. The Tigers will be hungry to improve and prove themselves this season. In order for that to take place, Josie Mendell and Jillian Milton most be lights out in big meets. Milton did not have the kind of state meet she is capable of after running #1 at sectionals. Look for 2018 to be an excellent year overall for the Tigers.

Tony's thoughts: This is a dangerous team on many fronts. First, the Lady Rockets competed in 2A during the track season and placed 4th in the 4x800 relay. Secondly, the squad came on the scene last year smashing the competition at the Oregon Sectional with 59 points. They would end up placing 7th in the state. With all seven starters returning, this could be a team on the podium in November. Alex Gomez was an all-stater placing 16th followed by a near miss from Bryahna Ganther who took 26th by one second. Add in another top 30 performer Bailee Fortney, there is nothing stopping the squad from moving full steam ahead except for more improvement from the 4th and 5th slots.

Coach's thoughts on the team: Doing the little things to keep everyone healthy will be key to our success.

Head Coach/coaches: Kara Leaman/Dike Stirrett
Last year's finish: State Champions
Key returners: Jordan Harmon (sr), Audrey Hancock (sr), Miranda Fairbanks (sr), Kylie Decker (jr), Riley Millsap (jr), Rachael King (jr), Caroline Bachert (so), Evelyn Atkins (so), Taylor Joop (so), Lilly Styan (so), Elizabeth Hulick (so)
Projected top 9: Harmon, Bachert, Atkins, Hancock, Decker, M. Fairbanks, Malia Fairbanks, Joop, Harper, Hancock
Newcomers: Maci Kraft (jr), Malia Fairbanks (fr), Harper Hancock (fr), Katelyn Allen (fr), Destiny Williamson (fr), Kaitlyn Reedy (fr), Krystal Crossin (fr)
Coach's thoughts on the team: Looking for this team to carry the momentum from the summer far into the fall. We have three returning all-state finishers, many experienced girls from our teams of '15, '16, and '17 hungry to finish high, and two new freshmen that could break into the top 7. We lost Jordan Harmon at her best last year due to injury that required her to cross-train the last month of the season and through almost all of 2018. She did not have a track season this year. I couldn't be happier for her return to running and know her leadership will bring a spark the team has missed. We look forward to new challenges and will not settle for less than our best!