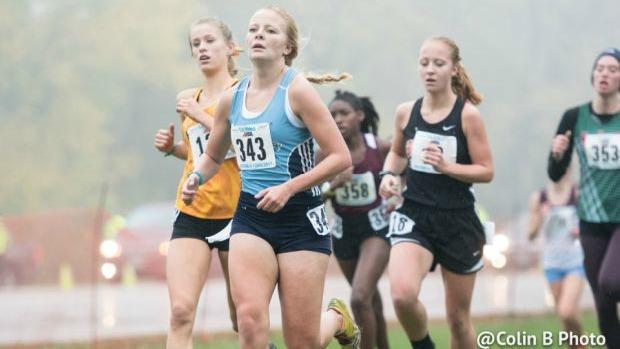 The next group of pre-season ranked teams will have ample opportunities to move up throughout the season. It will be interesting to see if anyone here can make the move to jump inside the top 15 and shoot for top 10 status as the season moves along.

20. Champaign (St. Thomas More)
Head Coach: Olivia Martin, Andy Wszalek
Last year's finish: State- 10th
Key returners: Fran Hendrickson (Jr), Amy Bohlen (Sr), Morgan Saunders (Jr), Sydney McMahon (Jr)
Coach Andy's thoughts on the team: It's never easy replacing seniors, especially it's three 4-year letter-winners. Marguerite Hendrickson, Morgan Cinnamon, and Maris Wszalek will certainly be missed for not only for their speed but also for their leadership. It is up to the new upperclassmen to assume the mantle and create the newest version of STM girls XC. I strongly believe we have the talent to build on our recent successes and continue to challenge in the postseason.
Tony's thoughts: The Sabres have been a top-notch program for several years, particularly on the track, but now the gravy train may be drying up. The program has gone through a few coaching changes within the past five years and that could upset team cohesion. Enter new head coach Olivia Martin who is a physical therapist and runner. Hopefully, she can maintain the stability of the program. She will have some solid parts returning including multiple all-state runner Fran Hendrickson. Hendrickson placed 5th last fall and is a threat to dethrone defending champion Emma Argo for the state title. Lastly, it all comes down to pack play and it does not appear as though the Sabres have a closer. Until one is identified this team will fight to stay among the top 20.

19. Elmwood
Head Coach/coaches: Kyle Anderson
Last year's finish: Elmwood Sectional- 8th place
Key returners: Alexa Perrow (Sr), Julie Dunkel (Jr), Sydney Hartwig (Jr), Kate Meyers (Jr), Greta Inskeep (Jr), Ali Wagner (Sr), Julia Bledsoe (Sr), Sadie Rumbold (Sr), Trinity Brandt (Jr), Christine Karn (So) Projected top 7: Perrow, Dunkel, Hartwig, Inskeep, Wagner, Bledsoe, Meyers
Newcomers: Sophie Bedell (Fr), Catherine Karn (Fr)
Coach's thoughts on the team: This is my third year with the girl's program and I am happy to say that this summer was better than the last. We've attained good mileage and I feel like the quality has improved from last year. I believe that Alexa Perrow has provided an excellent example to her peers by the amount she has trained. She has worked hard since last cross country season ended, and it showed as she qualified for the state track meet in the 3200. Hartwig, Inskeep, Dunkel, Bledsoe, Wagner, and Rumbold all had great summers. Morale is high. If we stay healthy through the training and translate it into racing, I think we can compete for an advancing place out of our tough sectional.

Coach's thoughts on the team: I'm very excited about the team and the challenges that lie ahead of us.  We have a good blend this year of veterans and newcomers and our seniors are feeling more comfortable in their leadership roles with the squad.  I'm looking forward to the season and eager to get started!

Newcomers: Miki Couch (Jr.), Marie Delaney (Jr.), Megan Dunscomb (Fr.), Vanessa Gillespey (Jr.), Mya Nored (Jr.), Mary Shupenus (Sr.)
Coach's thoughts on the team: I think we will be improved over last year, but how much is going to depend on how quickly the newcomers can adapt to running cross country.

Tony's thoughts: On the surface, it appeared as though the Bulldogs were an average to bottom feeder team until you looked closer at their situation a year ago. They placed 9th in the Elmwood Sectional which later turned out to be incredibly strong at the state meet. Things do not get easier for St. Teresa who find themselves in the same situation this season. But they return starters including all-star and individual crown candidate Veronica Hein back. It should be good times in Decatur if they all can be on one accord.

16. Tremont
Head Coach: Mike Lynn
Last year's finish: Elmwood Sectional- 7th place
Key returners: Lizzy Freidinger (Jr.), Sarah Leitner (Jr.), Tressa Scheuermann (Jr.), Ava Pflederer (So), Sarah Finnegan (Jr.), Marissa Leitner (Jr.)
Tony's thoughts on the team: Here is a team that was ranked most of the season and even made it into the final top 25 last year. Unfortunately, the team ran into a buzzsaw at the Elmwood Sectional and missed out on the sweepstakes by five points. The consolation prize was Lizzy Freidinger advanced on and earning all-state honors. Speaking of all-state honors, the Turks earned the biggest honor of all this past spring when they took home the 4x800 state championship. Freidinger and Scheuermann were on that relay. Winning something major and infectious. It should bold well for the six returners and the rest of the team this fall.