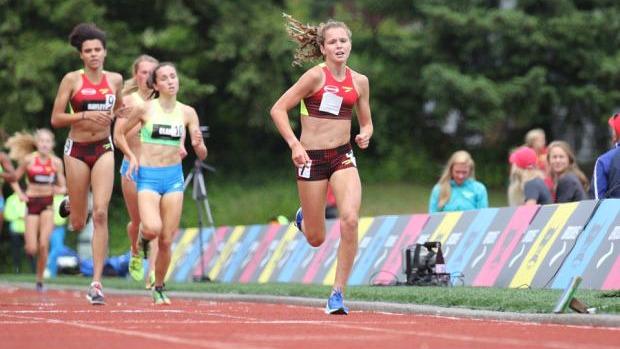 June is supposed to be a grand time, a reward if you will for many of the top track and field athletes in the country.  There are several top level post-season meets around that provide kids options to compete against one another. The Brooks PR Invitational is one meet, in particular, that is elite in nature and offers kids a great opportunity to explore competition amongst themselves and experience a slice of culture that Seattle has.

I had an opportunity to partake in the whole experience three years ago when I had an athlete who was selected to participate in the mile. Pavlo Hutsalyuk had won the 1600 at state in an awesome finish and time of 4:08.19. I knew that his mark was one of the best in the country at the time, and I knew that he wanted to compete in a post-season meet. The year prior he had teamed up with his Lane Tech mates and earned All-American honors at New Balance Outdoor Nationals in the 4x800 relay. Pavlo wanted to try something different. It was too late to compete in the Junior Nationals as his US citizenship papers arrived just short of the deadline. Pavlo was born in the Ukraine and moved here around the age of 6.

I didn't know the exact details of how to get Pavlo a bid or "Golden Ticket" into Brooks PR, but he excited about an opportunity and I worked to make it happen. Finally, after a few days of playing email tag with the meet talent director, Pavlo received an official opportunity to compete. He wanted to run the 800 with a goal to break 1:50. The meet director said, "we'll see." As we prepped for the meet, Pavlo trained very hard and competed in one last tune-up at the Midwest Distance Festival. He ran the 800 and clocked a personal best of 1:51.58- a school record and the second-fastest time in the state. We were excited for what was to come in Seattle.

I flew out to Seattle a few days early with one of the coaches from Lane who is originally from the northwest. I knew it was going to be a great time because I love seafood, mild temperatures, and new adventures. I got a call from Pavlo when he arrived on Thursday stating he was selected to run the mile. He appeared a little disappointed but grateful. I told him to keep his up and race to his capability. The outcome did not turn out as well as we like as Pavlo faded from the pack during the second half of the race. He ran a disappointing 4:21. It was a time that he could have done a solo on our home track if I asked him to.

But for many top Illinois kids, they may not get an opportunity to compete in Brooks PR. Such as the case for Rachel Hickey of Lasalle-Peru. We had lobbied for her in April after she had won the 800 in 2:10.70. At the time her time was a top 10 mark and certainly good enough to at least get noticed. Nope. Not even an email from the Brooks PR brass. I had to make multiple calls and emails before finally getting, "Rachel Hickey is a fine, promising competitor but unfortunately right now is shy of our standards in the girls 800m / 1 Mile and unfortunately we cannot offer her an invite at this time." That's fine except we never knew what those standard were/are.

So the problem continues to be whenever subjectivity is involved, kids from Illinois are left out or not even informed through respective channels. When I see other athletes who are not state champions with lesser marks and not meeting the same "criteria" it screams of unfair bias. Eventually, it is going to expose the entire process that Brooks PR has or not exist at all. In the meantime props to Enyaeva Michelin of Evanston, Katelynne Hart of Glenbard West, Clayton Mendez of Chicago Whitney Young, and Marcellus Moore of Plainfield North for getting invites to compete.