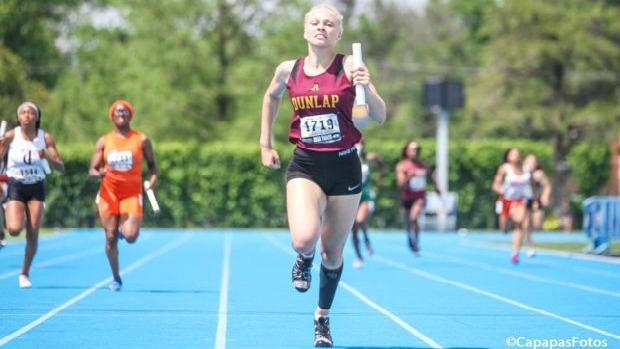 Pre-season #1 Dunlap didn't want to only win their second state title, they wanted to dominate. The fact that legendary program E. St. Louis Sr. dropped down in classification would give them legitimacy. For a moment there was the talk of the Eagles scoring upwards of 120 points. That would have put them in the unthinkable category with the immortal ESL Lincoln teams 1986 and 1988 that topped 140 and 121. Oh, by the way, they are the best teams in IHSA history boys or girls. Dunlap had to settle for 102 and the unofficial title as the best overall squad in Illinois, scoring in 14 of 18 events.

Dunlap scored at will on the track using the 4x800 relay as the catalyst. The Eagles seemed to toy with the field trailing until the second half of the race and finally winning comfortably in 9:25.29. The  4x100 was just as thrilling with anchor junior Kiara Pauli trailing, mowed down Rich East for the win in 47.25. The 4x200 wasn't as drama-filled as the quartet won with ease- breaking the 1:40 barrier for the second time in as many days in 1:39.38. Later it was the meet-ending showstopper that Dunlap finished second with a good 3:57.51.

Imani Carothers will go down as one of the best athletes in IHSA history with nearly a dozen medals- most of them are Gold. The senior from Brooks Prep had big plans to set several records and assist her team in a team trophy. It did not happen and Carother's mood darkened. Visibly upset from finishing second in the long jump to fellow senior Erika Furbeck of Geneseo who broke the class record with a leap 19-11.25. Carothers won the 100H in 14.19 and later the triple jump with a wind-legal 40-3.

High Jump state leader sophomore Diamonasia Taylor of Urbana is trying to be a four-time winner. She is now halfway in her pursuit of excellence. After winning the contest at 5-7, Taylor asked the bar to be raised to 5-11. This height would put her on par with former Bloom Township great Jelena Rowe who cleared 6-0 last year. Taylor will have to wait another year at top dog status.

The return of the Martin twins was a little quieter than anticipated, but their impact was just as strong. Tina Martin got the jump on the 100m field and held on to defeat Serena Bolden of Springfield Southeast 11.80-11.86. Katina Martin placed sixth in 12.06.

Waterloo junior Jenna Schwartz won the 3200 which set her up to earn a triple crown for the school season. The heat and humidity slowed things for the field which she clocked in 11:01.86. The 1600m was not as successful as a solid lead late in the race was evaporated. It appeared as though Schwartz was suffering from dehydration or some type of heat impairment. She began to fall back which allowed Dunlap freshman Campbell Petersen to win in 5:05.97... Rachel Hickey had a wonderful state series competing in three events. After anchoring her Lasalle-Peru team to a third-place finish in the 4x800, she went and ran the open 800 a bit tactically for the first lap. Gillian Fiene (Sr., Illiana Christian) tried to upset Hickey but it was futile as she disappeared to run 2:12.95.

After Jayla Campbell of Rich Central won the 400 in 56.05, it was on to a thrilling 300H race that newcomer Jessica Franklin of Mahomet-Seymour rolled to victory. Franklin, who does not use racing blocks, ran down defending champion Karyn Best (Wheaton Academy) in a state-leading 43.45. Perhaps more impressive is the fact that former homeschooled Franklin learned to hurdle just six weeks prior.