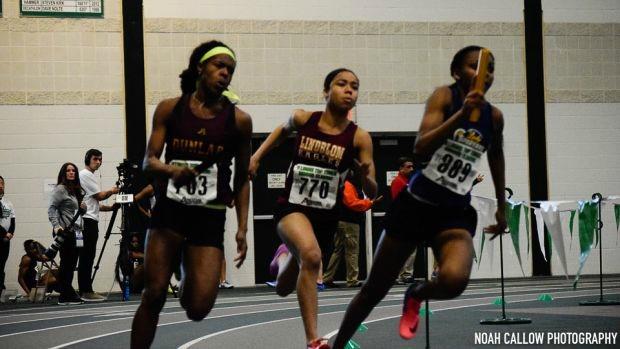 The Top Times meet is over, ending the indoor season and the winner was ... the weather. There was plenty of ice, snow and if you were up late enough after the 1A meet, you heard thunder. It ruined, ok somewhat ruined the 3A meet, because many teams were forced to turn around and some athletes were forced to miss events.

I had written in my Top Times preview that the stars would be stars and they were. What I think may have been missed was the number of records that were broken. In 1A 60m prelims, Bella Uscila of Elgin St. Edward not only broke the record by running 7.51, she ran a U.S. #13 time in the process and was the fastest girl in the state regardless of class. Unfortunately, Bella was injured after she took control of the race in the final. The boys 60m also saw a record get broken as Easton Bianchi of Sterling Newman Catholic dropped a sizzling 6.88.

In 2A, an all-time great Imani Carothers of Chicago Brooks College Prep broke the all-time 60H record in the prelims running 8.54 and won in the final at 8.56. Both of her times broke what many probably thought they would never see happen -- a record owned by the great Shamier Little of Chicago Lindblom be broken.

Class 3A saw the #1 ranked shot putter in the country, John Meyer of Lockport Township set an all-time meet record with a throw of 68'0" and Zach Bradford (Bloomington), the national indoor champion at New Balance, set the pole vault record in 17'06 ¼". Both records in both events were handled as expected.

As I look at next year's indoor season, I see even more records being broken at Top Times. As far as nationally, I think Marcellus Moore of Plainfield North takes another step to the top of the podium at New Balance. I think we get to see the real "Cinnamon" Dajour Miles of Aurora West at the national level. If we get to see it, many will be shocked. I've seen it in club track and it has yet to be displayed. The retirement from basketball her senior year means more time to train and hopefully, she gets to A&M and Arkansas to put work in on the banked curves. If that happens, she may just get the match up she wants against her friend Arria Minor of Denver.

Last year I decided to pick an athlete that didn't go to New Balance that was one of Illinois' best whom I personally thought could make some noise.  I didn't say win the title or wear the crown, but was really a national caliber athlete that could have gone. Last year my pick was Carothers. My first pick for 2019 is Danville's Ameia Wilson. She rolled all season smashing her competition. Ameia's 60m best was 7.56 and that would've placed 8th in the championship division of the New Balance 60m.  My other pick is Serena Bolden of Springfield Southeast. Serena went 40'05 1/4" in the triple jump at Top Times and that would've been 8th at New Balance in the championship division. Serena's best long jump this year was 19'06" and that would've been 5th at nationals. So Ameia and Serena supporters get your hotel reservations and suitcases ready. There's no reason to let other people have your spots on the podium wearing your crowns at nationals (especially your senior year).

Well that concludes indoor season, now on to outdoor. It's a brand new season, and from this point forward. It's what you do in May that matters now.