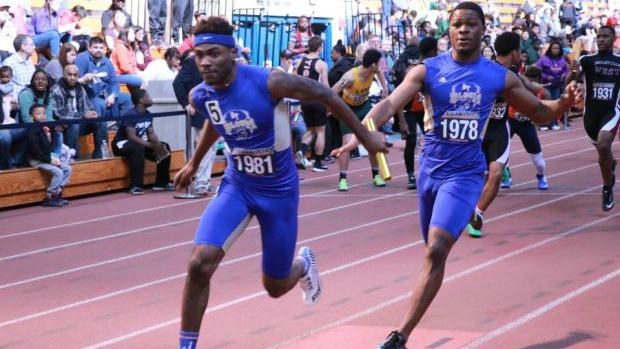 It was a very festive weekend with action all over the state from north to south and east to west. Thursday evening to late Saturday after noon, it was non-stop track and field in Central Illinois. Specifically, the U of Illinois-Champaign Armory played host to the Centennial Charger Invitational sponsored by First To The Finish. Among the entrants were superstars Zach Bradford (Bloomington) and Marcellus Moore (Plainfield North). There was also emerging stars Logan Hall (Arthur), Phillip Hall (Danville), Frank Massey (Bloom Twp) and Mathias Powell (Mahomet-Seymour) competing.

The A, B, C format offers teams to compete to their strengths on a level format. Typically the "A" division is for the team's top rated athlete. Relays have just one level. For teams competing at full strength for the first time this season, this was a great time to view and review inventory.

The field events had several interesting scenarios. The first order of the day was Frank Massey in the "A" long jump. He came in on a hot streak as the state's #2 performer at 23-10. There was not much competition for Massey who worked on a few minor technical items with his coaches and won 22-2.75.

Zach Bradford came as the nation's third ranked pole vault. The defending champion was chilling in the "pen" like a closing relief pitcher for most of the competition. He finally started his warm up at an amazing 16-6. The second best performer in Illinois has only cleared 15-6 and that happened with Callan Whitehouse of Mahomet-Seymour who placed 2nd to Bradford. Bradford realized that he had a "double header" competition with the second meet being the Windy City Pole Vault Summit. He quickly moved to 17-0 and 17-4. Three attempts at 17-9 were for not. It would have eclipsed his own all-time record 17-8. Next up is a date at New Balance Indoor Nationals.

Marcellus Moore was in the same perdicament- kind of- as Bradford in that he needed to work hard and get through the competition and on to NBIN. Moore won the 60m in 7.02 and 200m in a cruise like 22.01. It was easy work.

Mathias Powell is ready to make a name for himself after beating a giant Logan Hall in the 3200. Powell withstood a strong challenge in the middle laps to finally salt away the victory in 9:18.97.