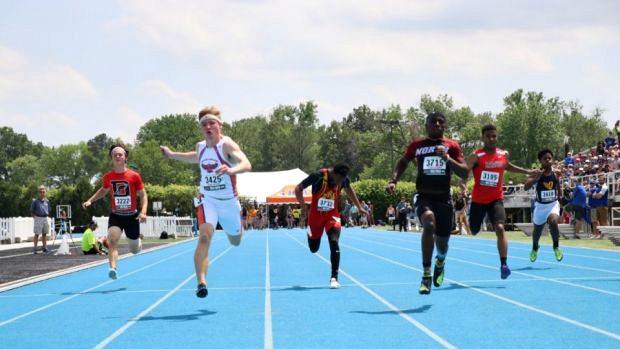 The two best sprinters in 2017 squared off at the state championship; look for both young men to make more money in May

100m-
2017 State Champion: Declan Rustay (Hoffman Estates) 10.54 [+1.1]
Key Returners: Rustay, Marcellus Moore (Plainfield North), Dubem Anikamadu (Huntley), AJ Henning (Lincoln-Way East), Bobby Nuzzo (Sr., Mundelein), Myles Gascon (Neuqua Valley), Jermarrion Stewart (So., Collinsville), Courtney Lindsey (Rock Island), Jackson Torok (Sr., Yorkville), Cedric Rowzee (So., Wheaton-Warrenville South), Josh Bridges (Homewood-Flossmoor), Jesuseun Adeyiga (Homewood-Flossmoor_
Season Outlook: A stellar compliment of speedsters return to do more damage in one of the state's deepest events. In fact, the top three state championship finishers return in Declan Rustay, Marcellus Moore, and AJ Henning. Additionally, there were 34 total finishers that qualified and 28 broke 11.00! There are no official stats to prove if this is an IHSA record, but it is certainly one in the FAT era. We are indeed in a speed fast era and it does not appear to be going anywhere in the near future. Moore completed his task as the fastest freshman in state history. Henning and Jermarrion complement Moore well in that one day when look back at this era, it may be the best ever.
Rustay came on late to beat budding young star Moore substantially in the final. Look for the hype to build once again early and remain in the consciousness of the fans until the final gun sounds. There is a strong feeling that both guys are going to smash a few all-time records this season. The fastest ever time regardless of legal wind conditions is 10.27. Anikamadu, Nuzzo, and a few others hope to join in on the fun. Only time will tell if dreams come true.
Top returning performers:
Complete List 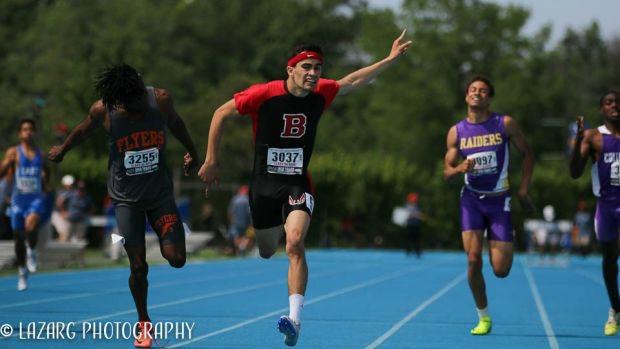 The margin of victory sometimes is about athletes who want it more
400m-
2017 State Champion: Luis Cossio (Barrington) 48.23
Key Returners: Cossio, Jermarrion Stewart (Collinsville), Wei Chen (Sr., New Trier), Declan Rustay (Hoffman Estates), Brandon Adams (Sr., Minooka), Quemarii Williams (Danville), Charlie Wade (Sr., St. Charles East)
Season Outlook: Let's be completely honest for a moment. This event was weak in terms of overall performance. For the first time in many years not a single performance broke 48 seconds. In fact, no Illinois boy rated in the top 200 nationally. Now the good news. We are going to see a vast improvement led by defending champion Luis Cossio who indicated that he would like to go under 48.00 before the state meet. Times are definitely important for bragging rights, and for a track and field rich state like Illinois, we expect to be among the elite powers year in and year out.
Some new faces may jump in and retore order. Declan Rustay ran the event just a handful of times, but during the summer he ran 47.56 on a full FAT anchor relay split. The tough performance raised some eyebrows and hope. Quietly there was Jermarrion Stewart running free as a freshman and placing 5th in the state. He will be a marked individual in 2018. Marcellus Moore indicated that he may add the 400 to his repetoire this year. Quemarii Williams finds himself in a good spot after spending much of his time running on his team's very successful 4x800 relay. He is the #2 returner here and it may be time to train more as a quarter-miler and make a run for the mountain top in May. Brandon Adams ran 48.49 as a sophomore before succumbing to injury last year. He has dropped a serious 49.20 in early January at the U of Arkansas HS Invite. Look for continued big performances from Adams this season.
Top returning performers:
Complete List 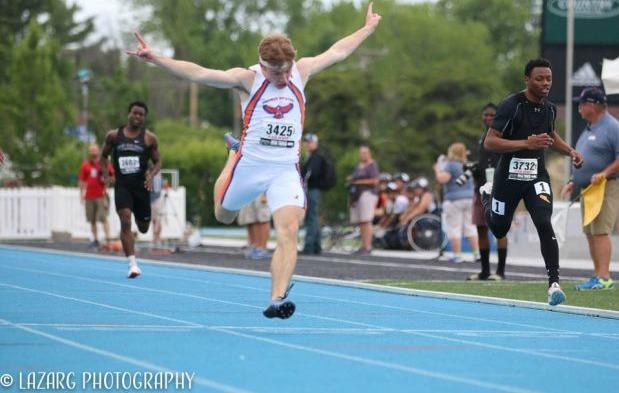 Declan gives the Hoffman Estates Hawks victory salute in last year's state championship
200m-
2017 State Champion: Declan Rustay (Hoffman Estates) 21.57 [-0.5]
Key Returners: Rustay, Marcellus Moore (Plainfield North), Micah Amerson (Normal Community West), Dubem Anikamadu (Huntley), Courtney Lindsey (Rock Island), Cortez Sawyer (Zion-Benton), Jermarrion Stewart (Collinsville), Bobby Nuzzo (Mundelein), Seun Adeyiga (Homewood-Flossmoor), Josh Bridges (Homewood-Flossmoor), Brandon Adams (Minooka)
Season Outlook: Defending state champ Declan Rustay will be a force in this event of course. Never underestimate a winner... at press time an uncatchable force appears to be Marcellus Moore. He has run out of his shoes before the official high school season started at Texas A&M and Arkansas. The 21.30 sizzler may only be eclipsed by him if we are to assume that he will not improve another step the rest of the season. Obviously Moore is going to get faster and we may see a 20.50 by season's end. A nice handful of returners under 22.00 is a good sign for another strong event on the docket. So the final checklist will serve a combination of youth and maturity for 2018.
Top returning performers:
Complete List
Tweets by MilesplitIL