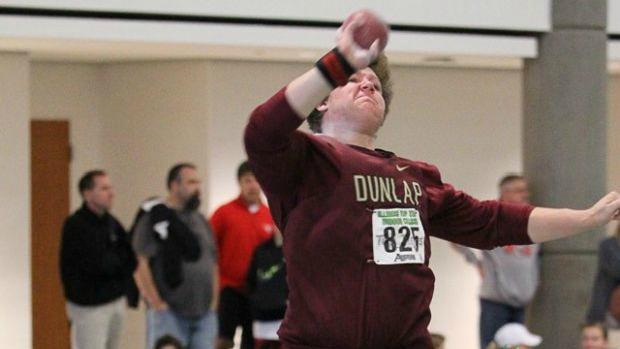 Austin Klokkenga is expected to have a great season in the throws this season, especially the shot put (Mark Cappapas photo)

Shot Put-
2017 State Champion: Sam Sikon (Carbondale) 63-06.00
Key Returners: Austin Klokkenga (Dunlap), Hunter Hendershot (Mahomet-Seymour), Harley Russell (Mt. Zion), Zach Matson (Prairie Central), Austin Kasap (Metamora), Tyler Sudduth (Rich South)
Season Outlook: This event returns into the new year on the lean due to heavy graduation. No longer will we see the awesome exploits of Sam Sikon who has moved on to Southern Illinois University. However, the big push in recent years by the track and field community are pleas to football coaches to get their linemen to participate in the throws. In the meantime, if all goes well, it will be a battle between Austin Klokkenga, Hunter Hendershot and a few others. Klokkenga is the top returner in the SP after placing 6th. Hendershot is next at 7th. Hendershot is not happy about that and will be going after Klokkenga for that state title. In talking to Klokkenga's coach and father Mark Klokkenga about Austin's goals and training indicated, "Austin is hoping to improve from his 6th place finish last year's state track meet. Austin has worked hard in the weightroom in the offseason."  Klokkenga is coming back stronger. Can Hendershot beat Klokkenga? Or could a dark horse come and take both of them out? It will be interesting to see what happens. Harley Russell and Darreon Perkins are 50+ feet throwers who plan on getting into the act.
Top returning performers:
Complete list
Discus-
2017 State Champion: Connor Weckerly (Sycamore) 176-10.00
Key Returners: Jordan Hawkins (Roxana), Harley Russell (Mt. Zion), Hunter Hendershot (Mahomet-Seymour), Nathan Harman (Monticello), Tyler Sudduth (Rich South), Trey Wideman (Sycamore), Payton Smith (Mattoon) Jackson Ivers (Waterloo), Clay Alewelt (Rochester)
Season Outlook: The graduation of the top two throwers along with the elevation of Clayton Hannula of Kaneland to 3A makes the path for Jordan Hawkins little less congested. He is the favorite going into this season. The thrower from Roxana took 4th last year at state and is looking forward to another great season with a possible state title to add to his trophy case. Unlike the shot put, the discus will see several top rated performers among its arsenal. Hawkins' career best 178-7 makes him the third best performer in Illinois. Joining Hawkins are returning all-staters Harley Russell (5th), Hunter Hendershot (6th), Nathan Harman (8th), and Tyler Sudduth (9th).
Top returning performers:
Complete List
High Jump-
2017 State Champion: Nicholas Jackson (Champaign Central) 6-09.00
Key Returners: Seth Groom (Marmion Academy), Ethan Poston (Metamora), Jonathan Decker (Unity), Levi Williams (Unity), Zhamond Lawson (MacArthur), Karl Wright (Lanphier), A'Jonte Lee (Lanphier), Saul Serna (Kewanee), Maurice Corrbett (Kankakee), Levi Cole (Erie)
Season Outlook: Seth Groom is returning this year as the #3 overall performer in the state. He will be looked upon as the favorite after his performance last year that got him 2nd place at state. Groom is one of the hardest working athletes according to his coach. The multi-talented Groom could be a multis athlete at the next level when he attends the University of Iowa. His resume includes such items as a two-time state qualifier in triple jump and a state perfomer in the 200, high jump, and long jump. Joining Groom are returning all-staters Ethan Poston (5th), Jonathan Decker (8th), and Levi Williams (9th). The question will be whether Groom can pace himself in between events to make it happen on the surface. Not to be missed or overlooked is Karl Wright whose best was in a frosh meet last year. Nerves may have got the best of Wright. But he should be in good hands as he matures with teammate A'Jonte Lee. They are the dynamic duo who should elevate one another.
Top returning performers:
Complete List 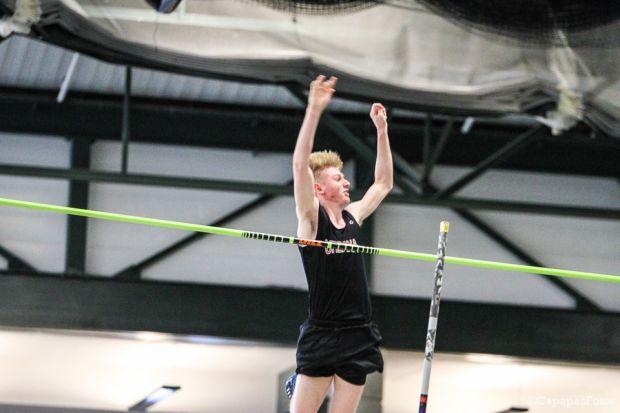 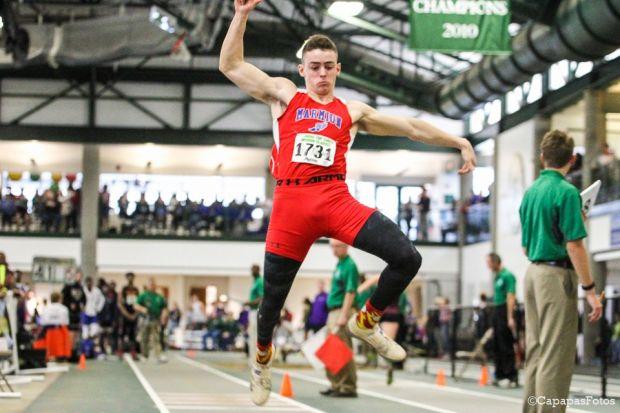 Watch out for the super talented Seth Groom this season. He is expected to challenge for both horizontal jump titles
Long Jump-
2017 State Champion: Myles Aldridge (Normal University) 23-04.50
Key Returners: Seth Groom (Marmion), Jaden Lacy (Marion), Deion McShane (Freeport), Nyrel Sullivan (Sterling), Dearis Herron (Lanphier), Leondre Pollard (Thornridge), Tre Rathbun (Streator), JJ Calvin (Kankakee), Justin Houston (Gwendolyn Brooks), Kobie Webb (Streator)
Season Outlook: Classification changes will ultimately decide how this event will shape out. E. St. Louis Sr. drops down into the classification where an unknown Alphonso Rice is at the top of the list jumping 23-feet . He could jump up and bite the competition, but it seems fair to tab last year's state runner up Seth Groom as the man to beat. Groom is a very good jumper who definitely will get over 23-feet. Jadon Lacy can contend with Groom for supremacy and it's too bad the chances of them competing together before the end of season. Lacy took 4th last year at state and has a state title in his mind. Joining Lacy and Groom are returning all-staters Deion McShane (5th) and Nyrel Sullivan (8th). All of these contenders should be fighting for 23-plus foot efforts.
Top returning performers:
Complete List
Triple Jump-
2017 State Champion: Myles Aldridge (Normal University) 47-08.50
Key Returners: Seth Groom (Marmion), Andra Ward (Cahokia), Kalen Murphy (Belevidere), Josiah Neal (Peoria Richwoods), Levi Williams (Unity), Caleb Diffor (Normal University), Reed Marshall (Richmond-Burton), Max Pinkowski (Sandwich), Justin Houston (Gwendolyn Brooks)
Season Outlook: Six top returners back from last year's state championship gives this event some wings to expand. Once again the name Seth Groom comes to mind because of his exploits. This may actually be his best event after taking the state runner up medal in Charleston a year ago. We could see several 48-plus feet efforts before the year is out.That's because Andra Ward aims to keep the Cahokia jumps tradition going. No relation to the legend Ja'mari Ward, Andra just wants to make his own name this season after skying 47-1 to lead all returners.