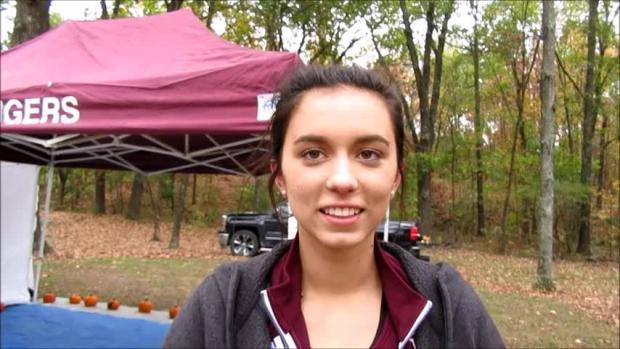 The Benton Sectional was loaded with competition in both the girls' and boys' races Saturday morning.  The 1A sectional, which has been hosted at the SIUE cross country course in years past, was held at Benton Community Park in Benton.

It was bound to be a good race with last week's regional champions all coming together to battle it out for that top spot. Regional winners Mia McLain (So., Benton)-Benton regional, Breanna Chandler (So., Freeburg)- New Athens regional), and Ansley Bailey (Fr., Massac County)- Carterville regional were ready to do battle.  An additional girl Gabby Alongi (So., DuQuoin) was quick to find to the trio at the start of the race and battle to the finish.  Chandler, McLain, and Alongi were all running side by side just a half mile into the race.  Coming through the one mile mark, it was McLain leading with Chandler running right on her shoulder.  Alongi remained close behind in third, while Bailey ran strong from the fourth position.

When the runners came into view with only a half mile of the race to go, McLain still led with Chandler trailing ever so slightly.  Bailey closed the gap and was now running alongside Alongi.  Coming into the finish it looked to be McLain, but as the runners flew down the final hill, Chandler came up with another surge.  McLain responded well and managed to hold on to first place, defending her sectional title and clocking a time of 17:33.6  The time was a new course record which McLain had previously from the Benton Invitational this year.  Chandler had a time of 17:33.8, while Bailey moved up to third place and finished in 17:44, and Alongi fourth at 18:00. 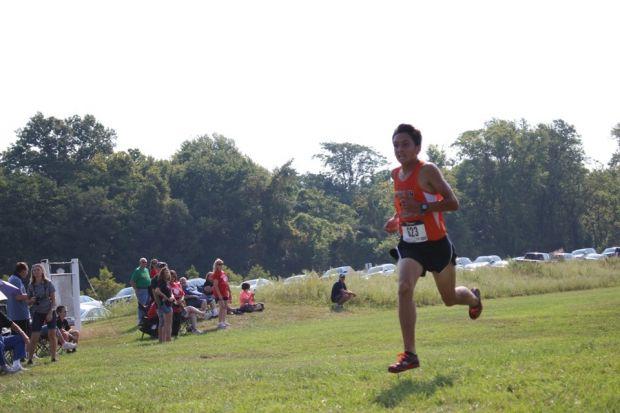 The boys also had a competitive field of runners and no one was to be counted out.  Garrett Johnson (Sr., Pinckneyville) and Luke Goebel (Sr., Breese Mater Dei) were quick to set the pace for the field.  Justin Mumford (Fr., Wesclin) and Brandon Schnitker (Sr., Nashville) sat right behind as they came through the first half mile together.  Charlie Parrish (Sr., Freeburg) then moved up and took the lead as the front pack came through the first mile at 4:49.  It continued to be Parrish, Mumford, and Goebel as the runners came out of the woods with just a half mile to go.  Schnitker stayed firm at fourth place a few paces back, while Johnson had fallen back to sixth place and Hayden Wimberly (Sr.) of Salem moved up to fifth.  It became another fight to the finish as Goebel and Mumford broke away from Parrish and came charging down the hill.  Goebel crossed the line at 14:24 to win it, with Mumford finishing in 14:25.  Parrish placed third in 14:32, while Wimberly now moved up to fourth place and finished with a time of 14:51 and Schnitker fifth at 14:53.

Freeburg was dominant as a team, finishing in first place by over 30 points.  Coming in second was Pinckneyville, followed by Columbia, Benton, and then Breese Mater Dei.  The teams will go on to race at the state championship in Peoria next weekend along with the advancing individuals who are Mumford, Hayden Wimberly, Brandon Schnitker, Austin Knight (Sr.) of Carterville, Logan Fulkerson (So.) of Steeleville, Isaac Sinn (So.) of Sparta, and Gavin Conway (Jr.) of Steelville.