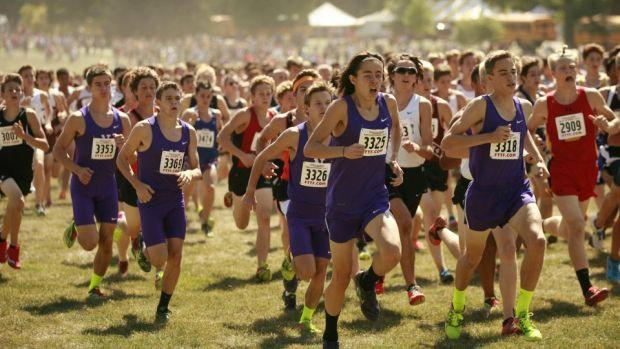 -There are alot things at stake here even if coaches play mind games. For example, when Neuqua Valley head coach Paul Vandersteen tried to walk on a tightrope about his team's approach for the big occasion, but he is excited about the challenge despite running in a tough meet over the weekend. But "State will always be our focus," he said. At the same time the message to the team that losing to Downers Grove North is not as big of a deal as some may think it is. Or is it? One thing for certain is the Wildcats have quickly developed into a very fortifide team. They have a front runner in junior Zach Kinne followed by a sling of strong closing pack runners. They learned in the season's opening meet at the Hinsdale Hornet Invitational, the need to close out races is extremely important against other stacked front running squads. For example, Wheaton-Warrenville South put three runners in the top 10, which put a ton of pressure on the back of the Wildcats pack to do or die. Neuqua Valley has not been challenged ever since that narrow win.
Downers Grove North has not competed as a strong unit since the Minooka Flight Invitational on September 16. "I am excited for these guys to showcase the progress they have made over the last few weeks," said head man John Sipple. "Additionally, we are going to have all of our guys up and running for this meet except for one notable exception, Matt Moravec, who is unfortunately out the rest of the season with a stress fracture." As well as the Trojans ran last year here, Sipple is keenly aware of the thrashing his team took by Neuqua Valley. They finished second in the team standings but the Wildcats put six runners in front of the first Trojan. That will not happen this time around because this team is a year stronger and mature. Lead man senior Jacob Ridderhoff actually has the third best time on the team at 15:00. They are going to need him along with teammates Jack Roberts and Ryan Birkmeier to be on point from beginning to end.
Hinsdale Central chose not to compete in Peoria over the weekend in favor of this affair. The Red Devils should be ready to show and prove and get some revenge against Neuqua Valley who beat them at their invite. They also lost a narrow race at FTTF to Downers Grove North. There are no big names on this team, but they justify their existence with a whole team approach like a 30-35 second scoring split. Top time of 15:08 by senior Sean O'Connell proves that success has to come in small quarters.
Deep teams that fill out the starting line include Downers Grove South, Glenbard West, Naperville Central, and Jones College Prep.
Individually, expect to see some solid times regardless of weather conditions. Kinne should be powering the pace about midway through. He is top returner based on his sixth place finish. Thomas Shilgalis (Jr., Naperville Central) and Stephen Pipilas (Sr., Downers Grove South) are expected to push the pace. But keep in mind there will be many runners racing toward the sub 15:00 barrier.