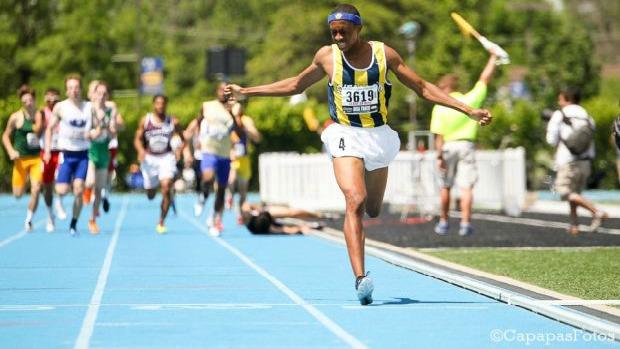 Two years ago was the return of the Midwest Distance Classic after a several year's hiatus. The meet showed signs of life with one Illinois all-time best effort by then Orland Park Sandburg ace Sean Torpy. Torpy went into overdrive inside of the last 200m to run an eye popping 1:47.95- the 7th fastest time in US history. That time would eventually eclipse the national charts as the top time. If nothing else it has inspired more athletes to enter this year's edition which is stocked full of talent. Meet director and track and field veteran Skip Stolley has done a great job in attracting solid fields.

2000m Steeplechase (7pm): This was supposed to the be highlight of the meet before star Soren Knudsen (Sr., Minooka) had to bow out due to an untimely illness. So don't expect a national record attempt, but instead look for an experienced steeple lad named Ben Ewert to step forward. The Beavercreek HS, Ohio graduate won last summer's USATF Junior Olympic 2k title in a US#1 5:54.22. Not only can the University of Louisville bound Ewert leap over hurdles at a steady rate he is solid in the flat races. His 4:13/1:55 credentials will come into play when goes for his own meet record 6:01.59.

800m (7:45pm): Should we all expect another all-time best here? Chris Conrad (Sr., O'Fallon) did the unexpected last several weekends ago at the Illinois State Meet. The reserved Conrad talked less and swung a big stick in running one of the fastest times in state meet history. He blazed a solid field in running away to a US#4/IL#1 1:49.91. Conrad did not let anyone know what he was capable of since fizzling a bit last year at state. But keep in mind that a fleet footed kid always have an opportunity to dazzle. It will be almost the same 3A cast that Conrad demolished back here. Look for Arthur Santoro (Sr., Chicago Jones Prep), Wes York (Jr., Waubonsie Valley), and Brian Kuehl (Sr., Geneva) are entered. Jack Aho (Sr., Grayslake Central) is entered to prep for the upcoming Brooks PR meet where he will run the mile.

3200m (8:45pm): The second section could emerge into a very good one based on seed marks. Evan Goodell (St. Louis, Michigan) was the small school state champion but ran the second fastest time in all classifications. So his personal best 9:08.03 should get a serious shaking up if he is still in peak mode. One of those ready to challenge Goodell is fellow small school distance ace Logan Hall (Jr., Arthur). Hall won the Illinois state meet by a slim margin and sports a solid 9:11.10 personal best. Watch for Blake Eversten (Sr., Hinsdale Central) continue to have fun and run himself into long distance shape. Evertsen did not race the 3200 much this spring due to lack of off season training. Clayton Adams (Sr., Kearney, MO) is a strong runner with a personal best 9:07.10. The entire field has personal bests under 9:30.

1600m (9:40pm): The final event of the day is not a misprint. It is the "bastard" mile that purists hate. But distance lovers in Illinois like exact things and the 1600 is exactly four laps unlike the mile (1609 meters) or the 1500m (approximately 3.75 laps). The class of the field here is York star Charlie Kern Jr. Kern, who won the Magis Miles elite boys field last weekend, will be at it again. He was not satisfied with how pedestian the pace setter ran in that affair. Kern ran 4:11.67 enroute to a good 4:13.20 mile at St. Ignatius High School. Maybe Kern's father Charlie Sr. could lead the charge. Senior has rabbited the MWD in the fast with fast times and he is one of the world's best master's runners, and was at one time able to handle his son. In the mix of the entries is the super popular Seth Hirsch of Nebraska. The cross country phenom has done well during the track season but somehow has not garnered much attention running a personal best 8:54.12. Hirsch was that 25th finisher who broke 9:00 at the fastest Arcadia 3200m in April. Before he takes his talents to the University of Wisconsin this fall he will try and better his 4:14.10 best. Clayton Mendez (Jr., Chicago Whitney Young) will give it his best shot at trying to overthrow fellow senior to be Kern. Mendez has a penchant for late race surging. He will need to be in good position to overthrow some of the top athletes here.