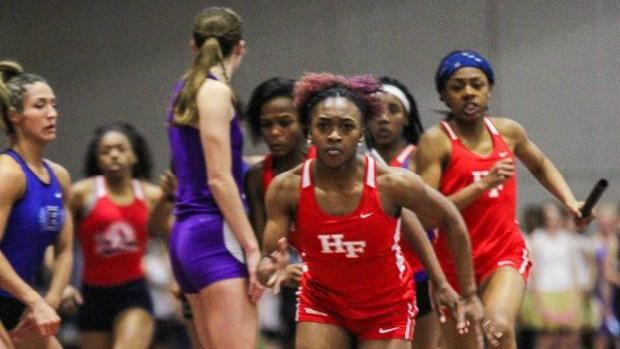 It was not as quite a magical night as last year but it was nonetheless a great night to be a part of a relay corps inside of the North Central College Recreation Center. All six races was replaced with a newly minted state #1 time.

-Previous state leader York was replaced by 20 schools, the first happened in section 2 of 3 when Prospect set the tempo with a solid 9:40.88. The Knights would hold on to the #4 mark rankings wise. But the hype was with the section 3 "championship." As it has been the case over the last several years, Downers Grove North led off with their top runner. Senior Emma Moravec went to work right away and stretched the field completely out dropping a 66-second circuit and then 2:15.7 at the first exchange. A reguvinated Alexis Grandys of Yorkville came in second at 2:17.5. Downers North continued to lead through two legs. Meanwhile, one of the meet favorites Minooka appeared to be completely out of the affair after a 2:23 opener by Emily Shelton. It wasn't until late in the third leg that the Indians close the gap on leaders Downers South, Yorkville, and Downers North. The ace was senior Mackenzie Callahan and she joined the party for a brief moment before bursting ahead and putting the finishing touches on the race. The split said 2:17.3 and with it a state #1 of course as well as national notoriety.

-Emotions were running high for state leader Homewood-Flossmoor on Saturday after they were disqualified for a lane violation at their ABC invite. Coach Zontavious Johnson instructed his girls to not dwell on it because in 48 hours that mark would not last anyway. He was correct. The insertion of previously sick junior Olivia Oliver was the remedy that the Lady Vikings needed. It was really not a contest as the state's #1 quartet led comfortably at every transition. By the time senior star Jaimie Robinson got the stick it was a positive feeling. Though she may not have known but West Aurora was trying to creep back in it and steal the race on the strength of emerging West Aurora superstar sophomore Dajour Miles. It was for not as Robinson glided the turns hard which relegated Cinnamon to desperation status in trying to close the gap. She would fall to the track with less than 100 to go grabbing her hamstring in agony. The Lady Vikings would celebrate a big victory and set a message to the rest of Illinois as the unit to beat.

-New Trier looked like world beaters with a 59.4 lead off. Lincoln-Way East, West Aurora, and Homewood-Flossmoor chased after the Trevians. The wheels would soon come off for New Trier who ultimately finished 17th in the standings. But for Lincoln-Way East it was another chance to steal the show. Only senior Lolo Lolade back from the powerful Griffins regime. Don't get it twisted now. There are some parts in Coach Brian Evans arsenal, but Lolade is last championship element. She intends on going out a winner again this season. The set up through legs was nice by the time she was ready for anchor chores. With no one to push her she had to settle for a solid 58.7 carry. It once again establishes the Griffins as a force in this event down the road.